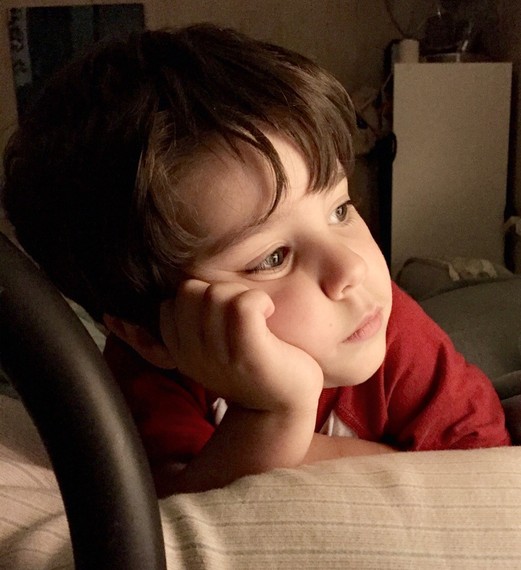 World Autism Awareness Day is April 2nd. As a writer and the mother of a toddler who is in on the Autistic Spectrum, I've been thinking for weeks about what I could write on the topic. Unlike a plethora of celebrities who seem to have an imaginary medical degree, I would never presume to be any kind of expert. Really -- what could I add to the conversation that hasn't already been touched upon? In recent years, there have been so many articles, resources, blogs and studies done on autism. It's been encouraging to know that it's becoming something that more and more people are aware of but there's still so much stigma surrounding the diagnosis.

One thing that's been written about often is how there's a misconception that all children who are autistic have a savant quality. It's called an autistic "spectrum" for a reason. There is a wide range from mild to severe. There are "high functioning" people who function successfully in the world, those who are "low functioning" that need constant support and everyone in between. You simply can't lump them all into one category.

This is why it's frustrating when I share with others that my son, Michael, is on the spectrum, people often ask what his special talent is. Someone even once asked my husband if he had super powers. While I'd love to have any reason to give Michael a cape (what boy doesn't love a cape?), this borders on a laughable question. We even had a family member suggest we take him to Vegas when he's older as if RAIN MAIN were a documentary and I've hit some genetic lotto. Newsflash: Not everyone who is autistic can count cards or hates Kmart.

This isn't to say children on the spectrum don't have hidden potential. Michael primarily has speech issues. He has echolalia (which is when someone repeats noises and phrases that they hear) and he does something called "scripting" where he memorizes parts of movies, television shows and music. He can recite them pitch perfect right down to the intonation. Quite often, when we're about to watch a DVD, Michael will turn to us and say perfectly and excitedly, "Coming soon... to a theater near you!" In my effort to make this quirk (as I like to call it) a positive, my thought was he could perhaps excel at music (play music by ear, introduce him to different musical instruments, etc.) or maybe he could be a master of different languages. I was going to start playing him Rosetta Stone recordings, but then it occurred to me, I'd have to learn all of the languages as well. Since I got a C- in my 8th Grade Italian Class, I voted that one down. The point though is that as a parent, I try to find what makes him unique and encourage it but really, don't all parents do that though whether their children are typical or not?

And dear god -- we've all heard about how many think vaccinations and/or fertility treatment have resulted in autistic children. I could cite studies upon studies about how neither is true but the people who know this don't need the reminder and the people who still insist on believing it will ignore me anyway. When I see anything on line about such debates, I treat them like I do my messy basement. I know it exists but I want no part of dealing with it.

There's also the common belief that autism is on the rise. Experts say though that it's more an increased level of understanding of the diagnosis. These days, approximately 1 in 68 children in the United States are diagnosed with autism. Instead of thinking of it as a pandemic though, I personally prefer to look at it as a growing awareness so that we can get these newly diagnosed people the support and intervention they need. At one point, Michael had a series of female therapists (speech, occupational, etc.) coming to his house fawning over his every word. Aside from making him a nightmare to date, there's nothing wrong with that level of guidance and support.

So here's the deal. I don't know if there's really anything I can say that hasn't been said. The only thing I can tell you from my heart is this: I'm a mom who on a daily basis (sometimes hourly) worries about her son. He's four now and in my mind, I think, "Well, we've got a few years before others start to make fun of him." I read everything I can, I try to understand all of the evaluations we receive, implement everything his therapists advise us, utilize what resources I can to ensure he has friends and I've taken him to any and every doctor I can think of.

I comfort myself with the fact that even though he's "different", that's often what makes him so very special. He'll do a dead on Ringo Starr English accent from a narration from Thomas the Train, a dead on impersonation of Albert Brooks in FINDING NEMO and then turn to me and say, "I love you!" Yes, he has a strong screaming reaction when his baby brother cries, but he also does everything in his power to make him laugh too. I know he sees the world in a way I don't and my hope is that years from now, his unique perspective will be a benefit. It may even make a positive impact on the world at large. Different can be good. Different can be innovative. That's my hope.

On World Autism Day, what I would ask of the public at large is whether you have heard the misconceptions I listed above or not, whether you have any interest or fear in the autistic diagnosis, please just do your very best to be empathetic. The next time you're at a grocery store. Movie theater, getting a haircut and a child is having a meltdown, remember that he/she may have sensory issues. Please show compassion instead of contempt. If you're children has a special needs child in their class, encourage acceptance instead of avoidance.

Like any issue that has a day or a month dedicated to it, it's meant to remind everyone that we all have our crosses to bear and instead of judgement, show support. No one is perfect and at the end of the day, that's the very best message I think anyone can share.

More:
autism spectrum disorderautism awarenessChildhood VaccinationsInfertilityParents
Newsletter Sign Up
Raise the kind of person you'd like to know
Subscribe to our parenting newsletter.
Successfully Subscribed!
Realness delivered to your inbox