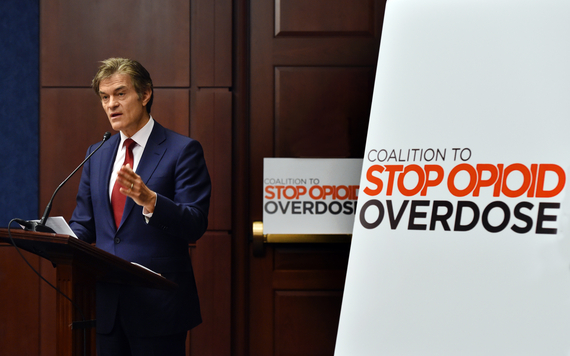 Yesterday I found myself in an odd discussion - I was trying to imagine under what circumstances I would tell a patient that I simply couldn't treat them because I had reached my quota of 100 heart surgeries and they were number patient 101. It was in discussion with a fellow physician, Senator Rand Paul (R-KY), who posed the hypothetical scenario as part of our town hall panel for the Coalition To Stop Opioid Overdose. 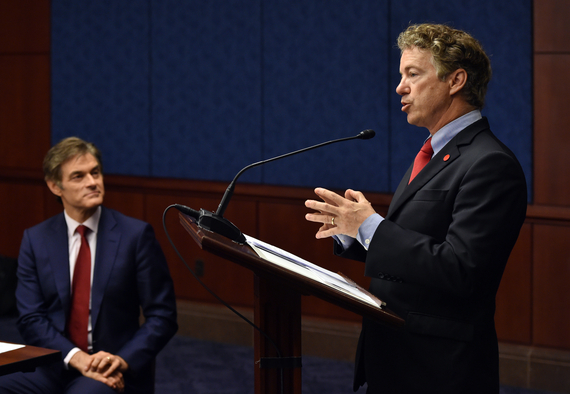 I was in the U.S. Capitol to advocate on behalf of the millions of families who are struggling with the disease of addiction, the loved ones of those we have lost and the millions more in recovery who deserve support. I sat at lunch with a mother and father whose child died from an overdose and their story was heartbreaking and preventable. I happily joined stakeholders as we met with lawmakers to persuade final passage of the Comprehensive Addiction and Recovery Act (CARA). The House recently overwhelmingly passed its version of the Senate bill and soon the two chambers confer to comprise on a final version to send to the White House to be signed into law. CARA will allow the government to grant money for addiction prevention, treatment and recovery support services, and increase countermeasures for overdose - our leading cause of accidental death.

Senator Ed Markey (D-MA) gave me an even deeper understanding of Dr. Rand's hypothetical rationing challenge. His bill would raise the cap on buprenorphine to 500 patients. The bill that passed the House earlier this month only includes a "sense of congress," which wouldn't actually change the law, to raise the cap to 250 patients. Of all the points that must be part of comprehensive addiction reform, this is both the easiest and most urgent. But apparently, according to the Congressional Budget Office, raising the cap would cost money that was unaccounted for, a no-no in modern law making. By raising the cap, more patients could get care, which would cost money. The reality that money would also be saved by avoiding addictive behaviors including overdoses that cause expensive hospitalizations is amazingly not part of the cost analysis. Figuring out how to pay for care is routine for Congress. Deciding how many people are entitled to care even if they can pay should not be the burden of non-medical elected officials.

What is the big deal with buprenorphine? Unlike methadone, buprenorphine was easily administered by a primary care physician and could be a discreet office based solution. But the DATA 2000 law required physicians to take an eight-hour course in order to earn permission to treat up to 100 patients with buprenorphine. The 101st patient would be turned away. This made no sense - would it be conceivable to tell the 101st cancer patient that they could not be treated because you had reached your official quota? No other prescription or medical treatment has such a limit. As a physician, the thought of turning away any person who needs treatment and is at risk of dying is counterintuitive to everything we are taught. Yet DATA 2000 did exactly that. What was behind this thinking?

Like methadone, buprenorphine can be abused. Lawmakers were concerned about patients taking too much or re-selling the drug, a process called diversion. But since 2000, technology has improved making diversion more difficult. Implantable pumps similar to insulin pumps can prevent abuse and a soon to be approved implant will slowly release enough drug to stop cravings. With the tripling of drug overdoses since 2000, we should re-visit this flawed rationing.

A quota on medical treatment of any other kind for any other disease would never be tolerated by the public. But addiction is different. Addiction is a disease that hurts others as well as the patient. Addiction frequently involves crimes or violence. It's the only medical condition for which there are mandatory prison sentences. Addiction has been synonymous with the marginalized and disenfranchised fringe of society, viewed as the moral failure of a lost ungrateful soul. The patient cap is allowed to flourish in plain sight because we didn't want "those people" at doctor's offices in our neighborhoods getting an undeserved second chance.

But we have evolved in our understanding of addiction's pathology, and so too must our acceptance of those who suffer as equals in need of treatment, deserving of care and possessing the hope and potential to get better. The vast majority of people addicted to opioids do not want to be.. Seeing someone struggling through a craving and getting "dope sick" is utterly heart wrenching. It is unthinkable to not help them. Yet imposing a limit on how many patients can be treated raises their risk of failure while guaranteeing they feel like one. Often it ends in their death.

It's easy to do the right thing here. While I support removing the cap on buprenorphine prescribing entirely, understanding the political realities, in the short term: when Congress sends a comprehensive bill addressing the opioid epidemic to the President by the 4th of July, it must raise the cap as high as possible by including the Senate's bill, the TREAT Act. We need to start saving lives with tools we know work instead of making it harder for those fighting addiction to succeed and survive. Most importantly we need to see the life of a person struggling with addiction as more worth saving than the cost of the medicine. Comprehensive reform means acknowledging "new normals." CARA's new normal is that people struggling with addicition can get better and deserve to get better. "Those people" are no longer our lowest common denominator to be punished and discarded; rather they are part of us and sit at our family dinner tables. CARA might not end our opioid crisis, but it would definitely help end our crisis of compassion. Let's lose the cap.