Both Jean Dujardin and Bérénice Bejo earned Golden Globe nominations on Thursday for their turns in the critically acclaimed film "The Artist," but the silent film's third star was left out in the cold -- which probably meant that Uggie the dog was scratching desperately at the bottom of the proverbial door.

Filmgoers and bloggers alike have gone crazy for Uggie, the faithful canine companion to Dujardin's depressed former silent film star in the movie. There is a campaign to get the furry friend an Oscar nomination, and this new, high-style photo shoot with The Hollywood Reporter should help the cause.

Joining Uggie is Cosmo, who played the pup in the Christopher Plummer film "Beginners." With all this buzz, perhaps there should be a separate awards category for animals? After all, Matt Damon had a whole host of feathery, furry and frightening co-stars in "We Bought A Zoo," and they would appreciate some recognition. 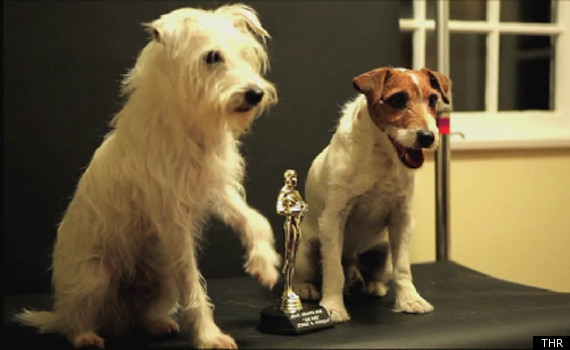