Were J.C. Chandor's "A Most Violent Year" released in 1981, the year referenced in its title, Al Pacino would likely star as Abel Morales, an immigrant business man hoping to make good on the promise of the American dream in a sea of shady deals and criminal activity. In 2014, it's Oscar Isaac in the lead role, giving a performance more than one critic has compared to vintage Pacino work.

"That has nothing to do with me. Those are their references," Isaac told HuffPost Entertainment when asked about the Pacino comparisons. "But, hey, man, Pacino's one of the greatest of all time. I'm flattered that's where they go in their mind."

Even excluding the Pacino parallels, it's a good time to be Isaac. The 35-year-old star broke out in last year's "Inside Llewyn Davis" and parlayed that visibility to key roles in future blockbusters "Star Wars: The Force Awakens" (where, at the very least, he pilots an X-Wing) and "X-Men: Apocalypse" (where he plays the film's title villain). He brings a stillness to "A Most Violent Year" that is both confident and menacing, like a tiger just waiting to pounce. Isaac spoke to HuffPost Entertainment about the new film, his onscreen chemistry with Jessica Chastain (who plays his wife) and why he wasn't sure about "A Most Violent Year" (out in limited release on Dec. 31) when he first read the script. 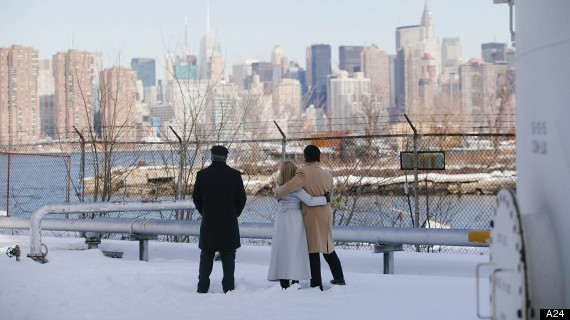 You do a lot of running in this movie, including a chase sequence toward the end of the second act. It looks exhausting. It was pretty intense. That chase sequence, I had that huge camel coat on and I had to run in moccasins on frozen ground. That was tricky. At one point I fall in the snow, which is a great moment -- but that was a very real fall. A very real face plant.

Speaking of the coat: You've talked about the way wardrobe can affect how you play a character before. How did that work in "A Most Violent Year"? The wardrobe was incredible. J.C., to his credit, said something that was a great little piece of direction. He said Abel's immaculately tailored suits, the camel coat -- it's not about fashion. They're suits of armor. For me as an actor, that's great. It takes on a very active purpose. He puts it on as chainmail for going into war. It's all strategy. He's an emperor. I read a lot about Roman emperors, particularly Emperor Hadrian, who was a real inspiration. All of that is about the presentation and intimidation. It's all part of a very calculated strategy. He's a long-distance runner. He has a very specific view of where he wants to go.

Which is being more than just a gangster. The reason he doesn't want to be a gangster is not because of moral superiority. It's just inefficient. If they find him with a gun, that's what they want. They want him to be a Latin gangster thug, but he has eyes on a bigger prize: politics, Manhattan. At the time, getting into Manhattan was a big thing. New York was on the edge of collapse and ruin in 1981. Everyone was high-tailing it out of there, but he had the vision to invest there. I think it's a very unusual thing. But also we didn't shy away from the capitalistic, sociopathic characteristics that someone who excels at business tends to have. At a certain point, even human beings are a commodity to be traded and are expendable if need be.

You and Jessica were classmates at Juilliard together, and that prior relationship really lends your characters a sense of intimacy that might not have existed otherwise. How key was that for you? We both work a similar way. We have a similar process when we dissect a script. We would talk about each other's characters very freely. That's a thing with actors: you don't know what their process is, so you have to tread very lightly when you meet someone new. The fact that we weren't afraid of offending each other, or saying something inappropriate, was great. We really pushed each other. We had so much trust with each other and we knew that no matter which way we went, the other person would go with it. Sometimes, I didn't know if she was going to hit me or we were going to kiss or what was going to happen. That kind of impulsiveness is very hard to come by if you don't know the person.

Javier Bardem was initially attached to this part, and then because of some creative differences it ended up coming into your orbit. What did you think you could bring to this role? Well, I got to say, it wasn't a slam dunk for me. I know it sounds crazy. But the script was very cryptic and dense. I could tell there was a great thing there, but it wasn't easy. I just couldn't see it. I had no idea how to approach Abel. I hate business -- I think it's the most boring thing ever -- I hate real estate, I hate money. All these things the movie seems to be about, I find very uninteresting. Heating oil? Those kind of things. So, I didn't know what my avenue was. I read it the one time at first, because I didn't want to fall in love with it if I wasn't going to get the part. Then J.C. and I would talk. I got to know him a bit. He showed me areas in Brooklyn where we would shoot. When he finally did offer me the role, I knew I wanted to do it. I thought J.C. was very interesting and I liked his other movies. Also, with Jessica, it was something her and I could do together, and those scenes were vibrant. I figured the rest of it, I would find my way in. It was very challenging, figuring out his arc, where he goes, where he's from. It needed to be really fleshed out, in a great way, and it was so rewarding at the end.

Is that hard to say to J.C.? "I like this but I'm not interested in business and it's about heating oil. Who cares?" Exactly! Then I had to realize that it wasn't about any of that. It's about something very emotional. This guy is very emotionally attached to this strategy and idea that he can remake himself. The self-made man that some people believe is a myth? It could be, because you do it on the backs of other people. That J.C. is willing to go there and explore someone like that -- and that this is about Abel's family as well and trying to build a future for his family at any cost -- all those things came from something I could understand. Having the ambition and focus on this very specific goal. What's remarkable about this guy is not that he's good at anything in particular -- he's good at sales, he's good at heating oil -- but he's a genius at confidence in strategy. And then sticking to it when everyone around him is like, "What are you doing?"

You mention his strength at sales. The scene where Abel is training his sales staff is one of the best moments of the entire year. Did you know that was just killer sequence? When it feels really great, it feels like surfing: when you're just riding this moment, which is a combination of the swell of the writing and all the investment you've put into the character. It was exhilarating, that scene. It's the first time I think the character really ignites, and you get a glimpse of who he is. At the base, he's a salesman. You hear his philosophy. It's funny and it's a little disarming, because you think he's trying to do it as a joke, but then you realize that the self-seriousness is a very specific and calculated choice. That's when you see some of his exceptionalness.

You were born in 1979, which means you grew up at a perfect time to be a "Star Wars" fan. What was it like when you found out you were going to become part of the franchise? The first movie I can remember seeing in the theater was "Return of the Jedi." I can remember seeing Darth Vader's helmet come off. The shock of that moment. When I found out I was going to be in it, I couldn't believe it. My family is stoked. My uncle collected all the toys forever. He almost passed out.

Is he pressuring you for "Star Wars" spoilers? It's like, "I can't! I signed my kidneys away!"

"A Most Violent Year" Photos