This guest post is the first in a series on "Gender and Conflict" which explores gender issues in the context of crisis and violence, and originally appeared on the World Development Report 2011 blog. Zainab Salbi, Founder and CEO of Women for Women International, discusses the cultural complexities involved in working to improve the lives of women in fragile and conflict-affected states. 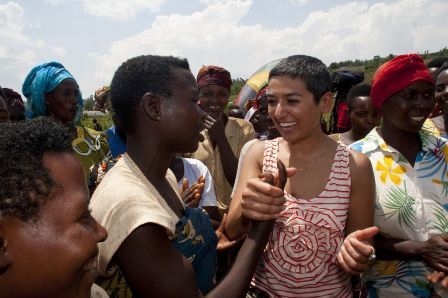 Working to improve the lives of women in fragile and conflict-affected states raises complex cultural issues, but sound economic arguments paired with practical solutions can help overcome resistance. Culture and tradition are too often used to justify the stifling of debate about change, especially when it relates to women's lives. As an Iraqi-American woman who grew up with Muslim traditions and ended up traveling the world through my work with Women for Women International, an organization that supports women in conflict-affected areas, I have had plenty of exposure to these attitudes.

The use of culture as a defensive weapon blights the lives of women from the Democratic Republic of Congo to Sudan and Afghanistan. It is used as an excuse to silence opponents. Although the intention may be to respect cultural traditions, it often leads to policies that undermine the social and economic advance of women. A classic example of this occurred in the first year of the Iraq invasion, when the US governing authority switched food distribution from public stores to mosques. This policy was intended to respect Iraqi culture but, in fact, the policy changed the role of the mosque from a private to a public role. For the mosque has played a public role associated with government actions in Iraq's modern history.

The result was to shift power towards the religious authorities. Those who felt the brunt of this shift were women. Previously they got food as equal citizens from the store. Now they had to go to the back room of the mosque --where a woman's place is-- and struggle to get the same food they used to get as citizens from the stores regardless of their religious practices. Navigating cultural barriers Cultural change is never easy to manage. There is a fine line between respecting cultural values and facilitating the status quo. The risks are many. It is easy to come across as patronizing, disrespectful of cultural values or, just as often, more conservative than cultural traditions require. None of this is good. My experience suggests that the only way to navigate these cultural minefields is through sound economic arguments. At Women for Women International, working in very different cultural circumstances from Afghanistan to Iraq we have discovered that it is far easier to win the approval of men in leadership positions when we focus on economic issues, highlighting the positive and practical impacts on women's lives. When the economic benefits are clear, cultural norms become flexible and negotiable rather than rigid and untouchable. In Iraq, for example, we managed to get a religious decree from the Imams stating that women's education and access to income is not only allowed in Islam but actually encouraged. That way, women in many places were able to leave their homes and get educational programs about their rights as well as training in vocational and business skills that led to jobs and sustainable incomes that benefited everyone. Highlighting economic benefits We have so many stories to share. I was speaking with a woman--covered from head to toe--about how our program addresses her immediate economic needs, when her husband joined the conversation. It was a very traditional family and I didn't know what to expect in terms of the husband's reaction. When I turned to him and asked what he thought, he said: "We are so poor. We are so hungry. I don't care how you help the family. If it will be through my wife, then so be it." I have experienced that same attitude in the villages of Afghanistan, Iraq, Kosovo, Sudan and numerous other countries. When economic progress is at stake, rigid cultural arguments become more flexible. Once economic necessity lowers cultural barriers, women can use the opportunity to renegotiate power relations within the household and the community. Cultural arguments may act as barriers to women's empowerment, but they cannot conceal its economic benefits.

ZAINAB SALBI is Founder and CEO of Women for Women International, a grassroots international humanitarian and development organization helping women survivors of wars rebuild their lives, families and communities.