In the recent article "Documents Show Changes to Ryan Social Security Views," BuzzFeed's DC Bureau Chief John Stanton mistakenly argues that Rep. Paul Ryan's positions on Social Security have become more extreme over time. While it is tempting to look at Paul Ryan's record and find the instances of moderation, Ryan has worked to privatize Social Security, raise the retirement age, and otherwise cut benefits throughout his career in Congress.

First, Stanton incorrectly pinpoints 2004 as Ryan's privatization epiphany, when he had already come out in favor of it during his first run for office. Stanton writes, "By 2004, Ryan's positions were clearly beginning to change... [they] now included support for investments of Social Security money." But on Ryan's 1998 campaign website, he was already touting the first mainstream proposal for private account, the 1994-1996 Social Security Advisory Council Report. According to Ryan's campaign website, "Each of the council's options recognize the need to begin investing the Social Security Trust Fund in private equities while at the same time recognizing the need to begin restructuring certain aspects of the program to ensure that everyone receive benefits."

Stanton also gives a very generous assessment to Ryan's 2005 Social Security Personal Savings Guarantee and Prosperity Act. As Stanton notes, "That plan was something of a hybrid, in that it allowed for private investment accounts so long as they were overseen by Personal Social Security Savings Board--a government run panel tasked with running the personal savings account program."

Stanton does not address the logistics of this extremely costly scheme, which would require massive transfers of money from the general fund to pay for transition costs and to guarantee benefits should the stock market not deliver as expected. The Center on Budget and Policy Priorities estimated that the Treasury would have to borrow $2.4 trillion over the first ten years, and $79 trillion over the next 75, adding to the national debt every single year. His plan was so extreme that even the Bush administration called this approach "irresponsible."

Stanton claims that the Romney-Ryan campaign's position to raise the retirement age and cut benefits for high-income earners is a departure from Ryan's previous positions. In fact, Ryan had already proposed raising the retirement age to 70 and implementing progressive price indexing in his Roadmap for America's Future as ranking member in the House Budget Committee. Rather than being a step towards moderation, as Stanton characterizes it, the Roadmap combined the plan to privatize the program with a retirement age increase and progressive price indexing that would effectively cut benefits for all but thirty percent of beneficiaries--all similar proposals to the Romney-Ryan proposal. (Graph included below).

After nearly five years of failure, Ryan has backed away from these extreme positions, which he described as "me, unplugged." He has now embraced the less controversial "fast-track" system, where any shortfall, even 75 years in the future, would require legislative action, despite the inherent unpredictability of such a long time frame.

Ryan has said that he thinks Social Security is a "collectivist system," "a welfare transfer system," and that privatization would be a victory against these collectivist forces in Washington. When he does stand against benefit cuts and tax increases, it is in order to justify privatization of the system. There is a strong paper trail, leading all the way back to his 1998 campaign that suggests that Ryan has always been extreme on Social Security, and always will be. 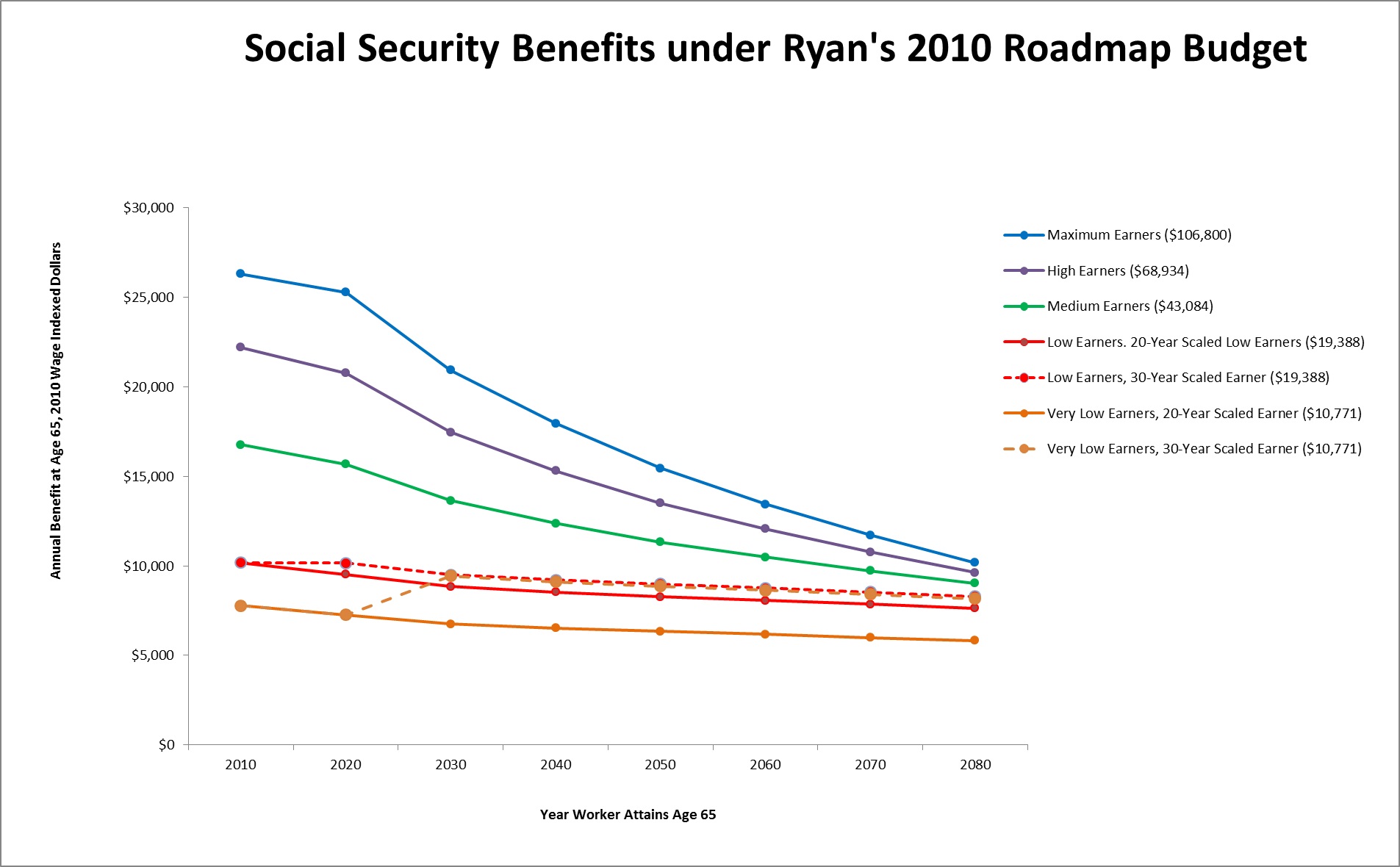