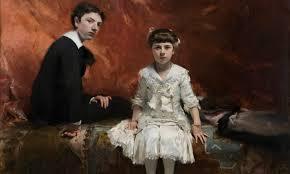 The Metropolitan Museum has been hosting one of the great Sargent shows this fall; it will close on October 4, and believe me if you haven't run over to see it, do.

This is a show of Sargent's "intimate" portraits, often ones that he did for himself, although some of the paintings featured here are big-ticket, public event ones whose allure cannot be questioned. They include "Madame X" (Madame Pierre Gautreau) possibly one of the most scandalous and reproduced paintings ever done by an American; the large, famous, full-length portrait of Dr. Pozzi; and portraits of major public figures like Edwin Booth, Gabriel Fauré, one of Sargent's favorite composers, Robert Lewis Stevenson, Ellen Terry, Henry James, among many others.

Sargent is always a sure-fire crowd pleaser, and the reason for this is simple. He was a superb technician in paint. Born in Europe to expatriate American parents of means, he studied under the feet of the Old Masters, especially Velasquez, and he also beautifully absorbed lessons from masters more contemporary to him like Manet, Monet, and even Toulouse-Lautrec. He was a gifted draftsman, and excelled in the sparkle of watercolors, one of the hardest of all media in which to work.

This show is huge, and it begins right off the bat with one of the most dazzling pictures in Sargent's output: his double oil portrait of Douard and Marie-Louise Pailleron, painted in 1881, when Sargent lived in France. This painting, now at the Des Moines Art Center, was shown several years ago at the Brooklyn Museum in their show of Sargent portraits of children. It's a hum-dinger. These are the kids from paradise, and hell. They gaze straight at you, and little Marie-Louise looks like she can't wait to get out of that pretty party frock and beat the crap out of you. It's a picture of coiled intensity. It also shows off Sargent's mastery of light, flesh tones, and using white as a pigment: white on top of white on top of white. He really shows this off in the Met's great Sargent masterpiece, "The Wyndham Sisters" (not in the show) where patrician white skin, white silk, white fox, and white peonies swoon over each other.

It is this kind of facility that became Sargent's calling card and also his bête noir. He pulls you in, and then at a certain point you get tired of him. By the end of this show, I was: I felt bludgeoned by his rapid-fire brilliance, cleverness, and even glibness, and kind of saddened by it, too. Because with Sargent there has always been this question: what was it that he really didn't get to show you as the price for being one of the Golden Boys of the Gilded Age? 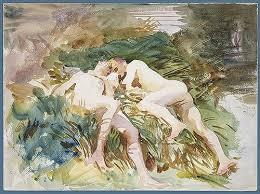 You get a hint of that in the water colors, especially his often-hidden ones of male nudes. Several years ago, the Metropolitan Museum did an entire show of them: they were gorgeous and very intimate. He finally got to reveal some of his real self. This show also has a scattering of them, tucked into a room to themselves. Sargent did very few female nudes, and the male nudes were usually done when he was off on his own, on vacation.

In the Met's current show, the wall label coyly admits that Samuel Jean de Pozzi, the brilliant, handsome gynecologist who was also chums with Marcel Proust and Robert de Montesquiou (model for Baron Charlus in A La Recherche du Temps Perdu), was an "esthete" and close friend of Sargent's. They traveled together, and although Pozzi was famously a lover of beautiful women, Sargent's portrait of him is so sensuous and seductive in his red dressing gown--the utter opposite in that period of formality--that it has knocked generations of museum goers off their feet. It is also one of Sargent's great studies of hands. Pozzi's slender fingers look as if at any moment they will release the scarlet robe itself. This has prompted more than one art historian to wonder what was going on. Or, as art historian Alison Syme at the University of Toronto has said, the delicacy of Sargent's painted hands work as "ciphers of homoerotic desire."

There are other references here to the old "Was Sargent really queer?" mystery, pointing to the fact that he traveled with young men, did not marry, and basically had a life-long companion in the French painter Paul Helleu. He also attracted gossip about his personal life. The painter Jacques-Émile Blanche, one of his early sitters who traveled in Sargent's rarified society circles, said after Sargent's death that his sex life "was notorious in Paris, and in Venice, positively scandalous. He was a frenzied bugger."

This might have kept Sargent in Europe, away from a prying American press, and in a time of raging homophobia and hypocrisy about same-sex relationships exacerbated by the Oscar Wilde trial in 1895, shoved a tight lid over his private activities or feelings.

That brought me to the question of what was not in the Met's show? Who was not in it?
For a portraitist who loved seeking out famous people, loved their favor and the company of the artistic greats of his period, who was crazy about Richard Wagner, then as ever a lightning rod of controversy, why was there no Sargent portrait of Oscar Wilde, when, during his heyday, Wilde was the most famous man in England, and was certainly, in his period, the absolute master of self promotion?

Sargent was a friend of Henry James, and James admired Wilde as a well-compensated public figure (Wilde made more money appearing as "the esthete Oscar Wilde" than James ever did from his novels) and as a playwright, something James aspired to and at which he was a complete failure. But James stayed as far away from Wilde's public pyrotechnics as possible, and since Sargent had already been involved with one scandal, the one over "Madame X," I wonder if he warned Sargent not to ever venture into that pool again with its punishing undertow.

Sargent was a friend and painter of Edmund Gosse, another barely concealed "bugger," and an elder statesmen of the Bloomsbury Group, of which Lytton Stratchey was also a prime mover, along with members of Virginia Woolf's extended circle and family. So another question: Why no portraits of "Bloomsbury"? By the time Sargent died, in 1925, Bloomsbury was . . . well, in bloom. E.M. Forster had written his great novels Howards End and A Passage to India, Strachey had published Eminent Victorians. So queerness was venturing out of the closet, at least in these more bohemian but still well-heeled circles.

The answer to this is very pertinent to someone of my generation, the post-war Boomers living after Stonewall: it makes me realize the close to impenetrable walls of silence, evasion, and lies that surrounded Empire, privilege, and society in that period. In Sargent's period of huge class stress, when you were either part of the Upper Crust or had no-crust at all, even painting the wrong kind of picture could have you banished into social pariah-ville. So you always knew where you stood within the walls.

Now in our own very scary version of the Robber Barons and the Gilded Age, when falling face-down into poverty is not that difficult for lots of people, I feel that those walls don't come down as much as re-locate.

And I also feel that acknowledging this brings a real light and edgy vivacity to Sargent's finally wearing technique. From what I gathered, Sargent was not a particularly smart man, but like Noel Coward, who also emerged in the 1920s just as Sargent left us, he definitely had a "talent to amuse," if not please.

There is something both sad about this and genuinely poignant as well, and we need to remember that.

Perry Brass has published 19 books, and is the author of the bestseller The Manly Art of Seduction, How to Meet, Talk to, and Become Intimate with Anyone, and King of Angels, a gay, Southern Jewish coming-of-age novel set in Savannah, GA. His newest book is The Manly Pursuit of Desire and Love, Your Guide to Life, Happiness, and Emotional and Sexual Fulfillment In a Closed-Down World. The Manly Art of Seduction is now available as an audio book through Audible.com.
You can look for him on Sunday, Sept. 20 at the Brooklyn Book Fair at booth 506 with the Greater New York Independent Publishers Association.