The Circle is one of the most divine structures of all. Even in its definition, as all the points in the plane equidistant from a center point, there is a sense of beauty and justice. While the Square and all things rectilinear may dominate our architectonic landscape and grid-centric spaces, it is its sibling Circle that brings the spirit of nature, growth and motion. It is the Circle that reminds us that along every point on the path is both a beginning and an end. It is the Circle that inspires poets and mathematicians alike.

The Circle constant Pi = 3.14159..., the circumference of a circle divided by its diameter, is the never repeating number that has intrigued both mathematicians and mystics for centuries. Pi has been calculated out to over a trillion digits, and is thought to contain-if translated to alphanumeric--every possible word, sentence and book. But before you go off looking for your social security number in the infinite sequence of Pi, know that even 31415 does not show up until over 88,008 digits in.

While this number may have one of the fanciest addresses on the number line, it also lives in a cross-sectional domain where mathematics meets culture meets nature. Some even debate the place of Pi as the circle-constant king, believing it should instead be tau (two times Pi). Nevertheless Pi continues to capture the attention of millions of people worldwide, especially on March 14th=(3/14)-which is both Pi Day and, incidentally, the birthday of Albert Einstein.

Pi Day was started in 1988 by the physicist Larry Shaw at San Francisco's Exploratorium science museum. Back then, as they do now, Pi Day partiers read the digits of Pi, gobbled down dessert pies and walked about in circles. In 2009, The House of Representatives passed House Resolution 224, designating March 14 as National Pi Day. The resolution "encourages schools and educators to observe the day with appropriate activities that teach students about Pi and engage them about the study of mathematics."

Before Pi day became official, I worked on visualizing the decimal expansion of Pi by arranging the Pi digits in a special way then color coding them, making digital quilts. I also tried various bases, including binary with black and white, and base 3 with red, white and blue, creating American Pi. To make real Pi quilts, I went to Alma Sue Quilt Shop for assistance, where I collaborated with Amish quilters to yield 13 large mathart quilts. 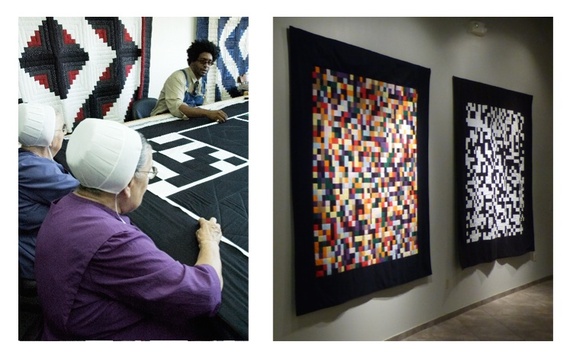 To add a human quality, I designed 5 Pi dresses for those who could appreciate both urban mathart geekness and dress shapes of the 60's, perfect for Lady Gaga or Erika Badu, who might be looking for some Pi Day fashion. 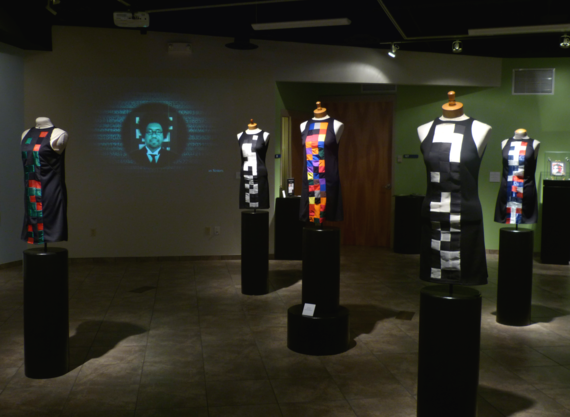 Going beyond the visuals, I had to hear Pi too. So I mapped Pi in the key of b flat creating a Blues composition that the late great Kenny Drew Jr. recorded for me. Then I teamed up with YouTube sensation mathmusician, Vi Hart to cover the first 170 numbers of Pi in the spoken digit "The Pi Day Anthem." This work of quilts, dresses, poetry, video installation and music based mostly on Pi, comes together in the exhibition, SquareRoots: A Quilted Manifesto, featuring my alter ego Johannes Curtis Schwarzenstein, the AfroGermanJewishMathArtPoet, my testimony to the magical connection between mathematics and art. Here is the exhibition video:

Mathematics is a beautiful language that helps us explore the physical world and beyond. So when the time comes to honor Pi Day, every March 14th, I invite you to reflect not only on all things circular, the number Pi, pizza, fruit pies, and that rocking Pi Day Anthem music video, but also the presence of mathematics in nature, art and the culture around us.

John Sims, a Detroit native is a multi-media political MathArtist who creates projects spanning the areas of mathematics, art, text, performance, and political-media activism. For more on his Pi work see the Science News article: https://www.sciencenews.org/article/quilting-pi