Remember podcasts? Made popular with a lot of help from the first iPod, they allowed us all the novelty of listening to a radio show without fear of going under a bridge and losing our signal. And while they've outlived their namesake "pod" -- the iPod Classic was discontinued earlier this year -- the medium seems to be enjoying a nice little renaissance.

The number of high-quality shows has increased and their audiences have grown so much that it's got some people wondering whether podcasts are capable of giving television a run for its money. And indeed, the perks of listening instead of watching are many. You can listen while you're driving, making dinner, staring aimlessly off into the middle distance, etc.

So how do you listen in? Many podcasts are available over the Internet, through the show's website, Soundcloud page or on iTunes. But a number of apps are available for those who want to listen from their phones -- Stitcher, Pocket Casts, TuneIn and, for Apple users, Podcasts, for example. Here are just a few recommendations of some podcasts you should be listening to.

What it is: "True Detective" for the NPR crowd. Reported and hosted by "This American Life" producer Sarah Koenig, each installment tells the story of Koenig's months-long investigation into the 1999 Baltimore murder of a young woman named Hae Min Lee.
Bonus: Reddit has a lot of theories and a helpful list of characters. There are even podcasts about the podcast.

What it is: "A show about curiosity" that's often compared to "This American Life." Each episode investigates the science behind a particular theme, kind of like a TED talk without the video buffering.

What it is: The mother of all public radio shows that explores weekly themes with interviews punctuated by music your elementary art teacher might like. Also, Ira Glass.

What it is: Not for foodies but for eaters. Each episode obsesses over a single gastronomic issue, such as the architectural strength of a sandwich.

What it is: The digital, anytime, anywhere version of the "storyslam" events that The Moth, a nonprofit organization, has been hosting since 1997.
Where to listen: The Moth app. Full archives aren't available on iTunes, but those who subscribe get access to one story per week, along with several full-length shows per year.

What it is: Some of "the most emotionally complicated stories and portraits of people that anyone is doing anywhere," according to radio god Ira Glass, on a variety of subjects from "seedy" to "sublime."

What it is: Data sets, microeconomists, "stomach real estate," macroeconomists, confidence intervals and a surprisingly accessible discussion of social issues in the U.S. and around the world.

What it is: HuffPost editors talk politics, entertainment, religion, comedy, weird news and more, with original interviews and answers to questions you didn't know you had.

What it is: A culture blog from the minds and mouths of two Beyonce-loving hip-hop mavens and recent New York transplants.

What it is: "Broad City" for public radio. Founded by a group of Montreal sex workers in 2006 and formerly known as Audio Smut, it covers topics often ignored by often prudish public radio programs, including how to smuggle pot onto an airplane using one's vagina.

What it is: Interviews on subjects strange, unfamiliar and freakish that answers all your questions about placentography and juggalos.

What it is: Stand-up comedian Marc Maron's brusque interviews with fellow comedians and funny people. (Most episodes will cost you.)

Stuff You Should Know

What it is: Every HowStuffWorks page you scrolled through in the Web 1.0 era, now in audio form.

What it is: An appreciation of everything around us -- like revolving doors and Looney Toons -- that was designed by human hands.

What it is: A gameshow with celebrity guests and contestants from all over the U.S. who share a mysterious affinity for voicemail greetings by Carl Kassel.

What it is: A mystery podcast from the fictional desert town of Night Vale as weird as if Tumblr took over Twin Peaks' local newsletter.

Podcasts Are Basically The New TV, So Get Ready To Binge Listen
90s Cartoon Characters Recast With Today's Celebs 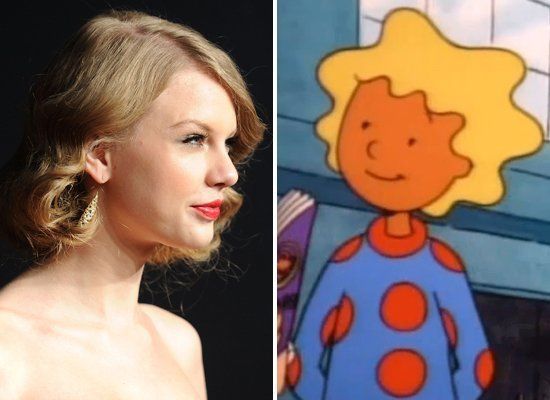 1 / 19
Taylor Swift as Patti Mayonnaise from "Doug"
Taylor's the only one who could get her hair to wave like that. No question about it.