This was supposed to be a post about Election Day from the sidelines. My first since 1978 neither voting nor reporting the results. We are in Vancouver, British Columbia and 'though I mailed my absentee ballot I feel a world away from the civic pride that comes with going to the polls or the excitement as the votes are tallied.
The Canadian newscasts are of course covering the U.S. elections, with leads referring to how contentious this year's campaigns have been.
Due to its proximity, the state of Washington is being more closely watched than the other Washington and rancorous TV commercials spill over the border.
But Canadians are focused on another November date... and it is fiercely non-political. No flags or even maple leaves mark Remembrance Day (aka Veteran's Day.) But poppies are everywhere: on the lapels of newscasters and on the coats of the young and old. The red and black felt flowers are passed out by veterans on street corners, collecting donations by passersby English, French, and Asian.
When I asked someone wearing the pin what it symbolized, he seemed to wonder what planet I was from. "It's to remember," he somberly answered. I got up the courage to try again, on the Granville Island ferry. This time my answer was delivered in verse: "In Flanders fields the poppies blow/Between the crosses row on row..."
Thank goodness for Google: In 1915 a Canadian physician, Lt. Col. John McCrae is believed to have written that poem during WWI, after McCrae witnessed the death of his friend. A few years later, an American woman named Moina Michael wore a red poppy to mark Remembrance Day. The symbolism caught on in France, Great Britain, and Canada, but not so much in the States. 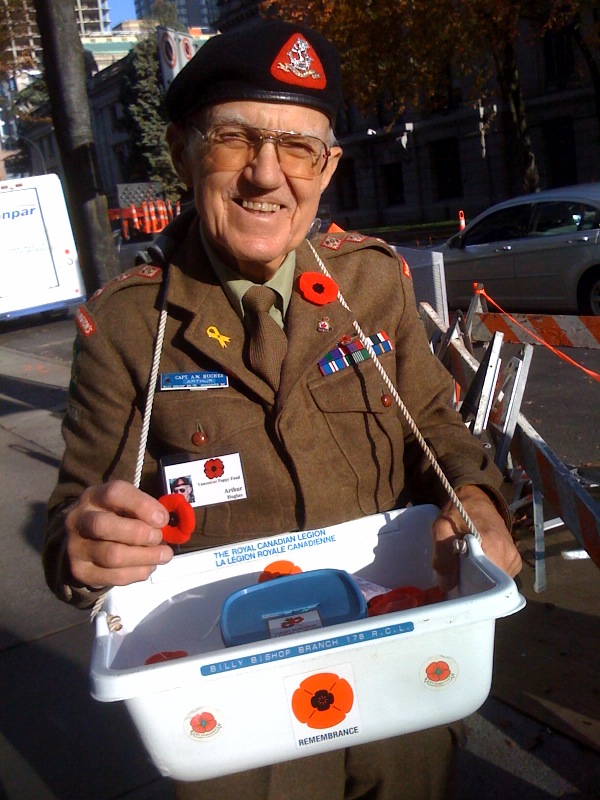 This is a picture of Captain Arthur Hughes. The 78-year old served during the Korean War. Every November the veteran dons his old uniform and stands on the corner of Robson and Hornby in downtown Vancouver for ten days passing out some 13,000 poppies and raising money for The Royal Canadian Legion. He tells me the money now goes to children's programs since there aren't that many veterans left. Every so often he gets an anti-war comment, to which he generally agrees. Besides the fact that he happens to be against war, he says Remembrance Day is completely apolitical.
Veteran's Day in the US is still a federal holiday, but some local governments and schools remain open. It's marked by sales as much as by ceremonies. And the symbolism? Some wear a flag pin, but its meaning may be misconstrued. Our Stars and Stripes have been high-jacked, fodder for political warfare. Right vs. Left, instead of right vs. wrong. September 11th toned down the vitriol for a while, but time seals old wounds.
Another election day for the history books. From the outside looking in, the vote seems to have been more about saying "No Bama" than yes to anything else. I'll be back home for Veteran's Day. And I'm bringing my poppy with me.