Ann Dvorak could have been a major Hollywood star. At least she should have been. With unconventional, yet striking good looks and an acting style that was raw and understated for the 1930s, she seemed destined to rise to the highest heights Warner Brothers had to offer. However, that immortality reserved for the brightest personalities of the silver screen eluded Ann Dvorak.

PHOTO GALLERY
An Exclusive Look at a Honeymoon

When I first conceived of writing a full length biography on Ann back in 1998, the "why?" was what I hoped to answer. Why wasn't she a big star? Why had I not heard of her earlier? Why wasn't she a household name, like contemporary Bette Davis?

Over the next fifteen years, the answers to the "why?" surrounding Ann Dvorak were uncovered, and there emerged a complex woman with a deep desire to be a film star, torn by an unexpected need to be a well-rounded and devoted wife. She tried to be both, but it wasn't possible during the era of the powerful Hollywood studios.

In early 1932, Ann was well on her way to becoming that household name. She had broken out the chorus at Metro-Goldwyn-Mayer when she was barely twenty, by landing a starring role in the now classic gangster film Scarface. Warner Brothers quickly bought her recently inked contract from Howard Hughes, and starred her in films like The Strange Love of Molly Louvain and Three on a Match. The press crowned her "Hollywood's New Cinderella," and Dvorak seemed poised and ready to embrace film fame with open arms.

Then she fell in love.

When Ann Dvorak fell in love, she did it as only a twenty-year-old can -- feverishly, hopelessly and completely. The man was also an actor, but Leslie Fenton viewed Hollywood as a piggy bank, which he would break open every so often, in order to fund trips abroad. Once he was broke, he'd find his way back home and do it all over. Fenton scoffed at long-term studio contracts, preferring the freedom of freelancing. When Ann Dvorak became his wife, her deal with Warner Brothers did nothing to dissuade him from wanting to show his bride the world.

By July of 1932, Ann had four months of marriage and a year of fame under her belt, and was buckling under the pressures. Leslie Fenton felt she needed a rest from the breakneck pace that Warner Brothers frequently subjected its contract players to. He decided it was time for his wife to skip town and walk out on her contract.

Ann could have played the off walk-out as an action fueled by exhaustion and a desperate need for rest, as well as time alone with her groom. Had she done that, she may have weathered the storm that followed. Instead, she publicly bemoaned the slave-driving producers of the film industry, complained about her salary of $250 a week during the Depression and accused Howard Hughes of selling her down the river by letting Warner Brothers purchase her contract.

The press, who had been enchanted by Ann only weeks before, quickly turned on her. Howard Hughes issued a two page, single-spaced statement taking exception to her comments. Warner Brothers stayed mum on the whole affair, but it's not likely that Jack Warner found any amusement at being called a slave driver.

Despite this backlash, Ann and Leslie forged ahead across the Atlantic as planned, where they traipsed around Europe and Africa for nearly eight months. The fallout of her career hung over Ann like a black cloud, particularly while her husband was busy filming the movie F.P.1 in Germany, but she held fast to the belief that she had done the right thing. The months spent in London, Berlin, Paris, Vienna, Stockholm, Rome, St. Moritz and Cairo, among other places, was unmatched by anything she had experienced up to that point. It's likely the sheer joy and elation of the honeymoon with Leslie Fenton remained unsurpassed during the course of Ann's life.

Eventually, the money ran out and the couple returned to Hollywood. Jack Warner took his prodigal daughter back, he had paid $40,000 to Howard Hughes for her contract after all, but he had little interest in starring her in anything. Instead, she became a Warner workhorse, appearing in up to ten films a year, though few were particularly memorable.

Any momentum Ann's career may have gradually gained over the next couple of years was quickly squelched when she took her studio to court. Ann claimed Warner Brothers had breached her contract by suspending her indefinitely without proper cause. The judge disagreed and Ann's troublemaking reputation was sealed. Sure she would work into the 1950s, but the promise of stardom was gone forever. Ann's legal actions in early 1936 paved the way for fellow Warner actors James Cagney and Bette Davis, who both filed suits against the studio the same year. Cagney found success in court, while Davis' well-timed actions earned her the respect of Jack Warner and a phenomenal career.

As for Ann, the film history books forgot her court case, while lauding Cagney and Davis. After retiring from acting in 1952, Ann eventually became an anonymous and cash poor resident of Honolulu until her death on December 10, 1979. The marriage she had sacrificed her career for had become a casualty of the Second World War. As a British citizen, Fenton enlisted in the Royal Navy, and Ann followed him to a war-torn England. Their individual experiences caused them to grow apart, and they divorced in 1946.

After uncovering the "why?" of Ann Dvorak's career, the question still looming was if Ann, herself, thought it was all worth it, which is something I thought would never be answered. However, as Ann Dvorak: Hollywood's Forgotten Rebel (University Press of Kentucky) was getting ready to go to press earlier this year, a mysterious person contacted me claiming they had some of Ann's personal items from her last apartment. After two grueling months of haggling, the package finally arrived. Among the cancelled checks and rent receipts was a journal with one entry. Written less than two years before she died, Ann reflected on the lost promise of Hollywood with great regret, noting: "I threw my life and career out the window."

Despite this personal proclamation, among the papers was a treasured scrapbook of photos from that 1932 honeymoon. Years earlier, I had located personally owned publicity stills from her days as a glamorous actress which Ann had relegated to a storage unit. Unlike the remnants of her faded film career, the snapshots of her and Leslie Fenton during those early passionate days were something she kept close to her until the end.

In the end, Ann Dvorak did look back on the promise of 1932 with some longing. However, if given the opportunity to do it all over, I think she still would have made that trip across the ocean, trading in Hollywood for that shot at true love.

Meet Ann Dvorak: The Actress Who Traded in Hollywood for a Honeymoon
An Exclusive Look at a Honeymoon 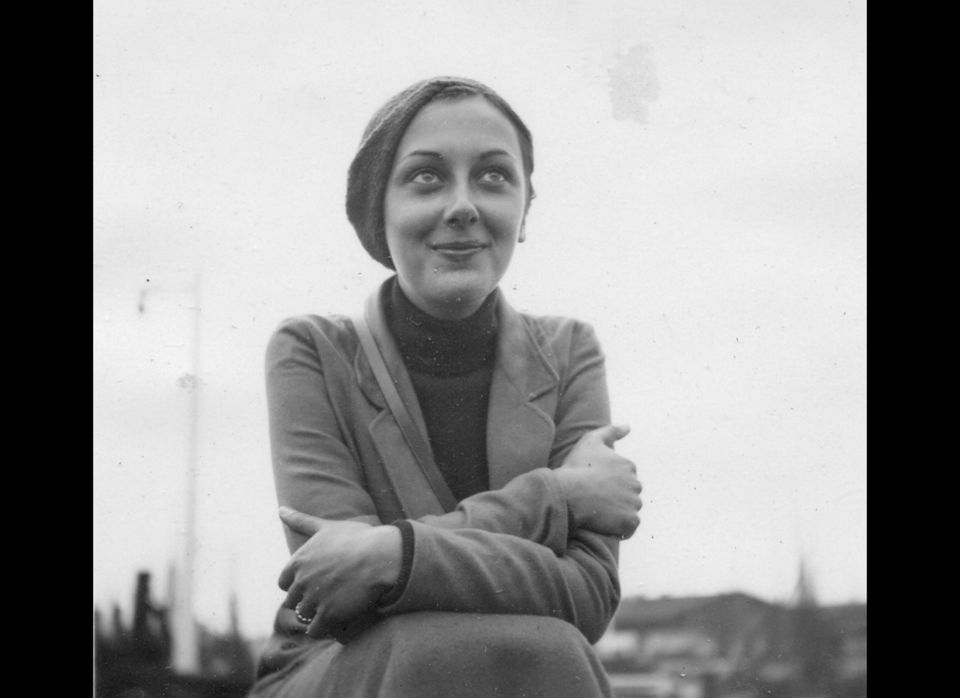 1 / 11
A Young Actress in Love
Shortly after celebrating her 21st birthday, Ann Dvorak takes in the "color and variety" of Europe during an eight-month honeymoon that spoiled her chances at Hollywood stardom. <em>(Previously unpublished photo from the personal scrapbook of Ann Dvorak/Collection of Christina Rice.)</em>