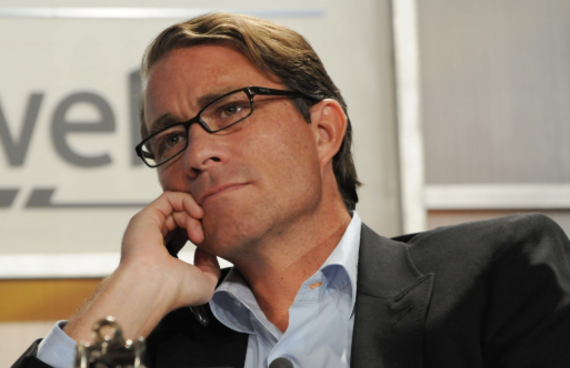 As a trailblazer, John Battelle's insights into emerging trends are highly sought after and considered the gold standard by many in the industry. As an entrepreneur, he is best known as the co-founder of Wired, and launched the Industry Standard, Federated Media Publishing and, most recently, Sovrn. Sovrn is an advocate and partner to 20,000 publishers and represents more than a million sites, which use their platform to grow their audience, engage their readers as well as monetize. In addition to founding several media properties, Battelle co-founded and co-hosted the annual Web 2.0 Summit and his highly anticipated book, What We Hath Wrought, aims to forecast the interconnected world in 2040. A true Rainemaker indeed.

Battelle is a part of a unique breed of highly successful serial entrepreneurs, and not to mention, a creative genius. His ability to see patterns in technology and media that are not readily apparent to most is astonishing. Join me in getting to know one of today's most forward thinking business leaders.

Nova Lorraine: Are certain individuals destined to be entrepreneurs?

John Battelle: Entrepreneurism has become a job description in today's world, and it's simply not true. When I did Wired in the early 90s, the first truly crazy thing I've chosen to do; we had 300K and 11 people, and I was employee number five or six. I took that job, and was so in love with the idea and saw that I was going to be part of building something, and never thought about the consequences (e.g. no pay for three months). I never thought, "Oh, I'm going to be an entrepreneur now." Now, everyone wants to leave business school or any school to be an entrepreneur. It's like a kid leaving school early to be drafted, as if it is an understood path. It's celebrated and its hyped. That wasn't what I was. We go on this path, and we figure out what we are and are not good at and we re-examine it. It turns out that a lot of entrepreneurs stop running things, and then they become venture capitalists; they become the player under a coach or the coach that helps the player. After a couple of decades of starting stuff, you tend to have a bit of reflection. I just can't imagine not being in a start-up and had been working at a "real job" instead. I am fortunate to have made a path, so far, in making new things as opposed to working on others' in a large organization. A lot of people go through this process and fail. Maybe it's not wise to for the press to glamorize this. There is a potential downside if you don't go into it with your eyes wide open.

Nova Lorraine: Can you talk about your interest in technology as an artifact of who we are and what we do?

John Battelle: I'm obsessed with ad technology right now, not for the technology, but for what I think it means underneath. The infrastructure of advertising technology is very complicated. It's an open platform with all kinds of players from entrepreneurs to fraudsters. It's 10 times the size of search engines, i.e. Google. It's how our culture is going to interact with each other: i.e. through data. I'm studying it because it's the next great artifact of our society. I'm interested in how to guide it. And what is the greatest artifact ever created so far? The Macintosh.

Nova Lorraine: Has the premise of your book changed since your announcement to write it, back in 2011?

John Battelle: It's a difficult task to paint a picture of what the world could look like in 30 years. In terms of a premise and starting the narrative, I've figured out how to tell the story and I've identified a hero. The over-arching premise is the same, but it's still an active work in progress.

Nova Lorraine: What are some of the more concerning observations that will be highlighted in the book?

John Battelle: One: As we, as a society, become data-driven and begin to clothe ourselves with data about ourselves and our interaction with others -- it is analyzed and tracked. It is done on systems that we don't have control over as individuals. We are entering a new era and we have to think about who is in charge of this information. My concern is that there isn't an opportunity for citizens to have access to their own information...Facebook, for example. The system was built as a closed system.

Two: I'm very concerned with early policy lock-down. The concern or the fear over privacy tracking creates an over-broad legal framework that stunts innovation. In the mid 90's when the Internet first became a thing, we saw a reaction of society and lawmakers that viewed the Internet as negative. That was society's view of this strange new dark force of the web. "What's next?" the answer is "data." It's regarded as a negative that data is used to track you. But the legislation shouldn't prevent the exchange of data in an open system. That would prevent an explosion of ideas and innovations. For example, sharing health data anonymously would allow entrepreneurs to analyze it and generate ideas to better assist in new healthcare innovations. This could allow us, as a society, to create a progression of ideas that could add decades to our lifespan. Right now, we avoid this kind of openness on the net.

Three: Finding and describing artifacts that exist today that will be considered artifacts of the future. Programmatic Advertising Technology, computing infrastructure that underpins the display of ads on the Internet, is good example. There is a phenomenal infrastructure of data that decides what ads you see; that infrastructure is an open ecosystem. There is no one actor that controls it. Thousands of companies use it. It's probably the most intense computational system that has been created on the planet. If anyone wants to start a company and add value to it, they can, i.e. Facebook and Yahoo. We need a programmatic infrastructure underneath us that is open and responsive to the amount of data that we have access to in the world. It's a model, moving forward, for how we interact with our energy grid, transportation grid, etc. The current system is closed and inefficient and non-innovative.

Nova Lorraine: What do you want the reader to walk away with after reading the book?

John Battelle: To keep innovative solutions from being stunted by political and legal lock-down. There is an extraordinary world to be created if we just have faith in ourselves.