My grandfather's sister, Lillian Wilson, married a man by the name of Harvey G. Setzer in Weippe, Idaho, Shoshone County, on July 3, 1890. Harvey was a miner and contracted consumption. The doctor prescribed a warmer, drier climate so they moved to Valle Vista, San Diego, California, in November 1890. He died there in January 1891. My grandfather also told me that Harvey drove a wagon in 1885 carrying five Chinese men accused of murder to the federal court in Walla Walla, Washington. Vigilantes waylaid them and hanged the prisoners.

I have searched for anything that could give me more information on Harvey G. Setzer but have hit a wall at every turn. Do you have any suggestions where to look? ~ Jeannie

Every search for our unknown ancestors always begins by confirming facts that a person believes to be true about their known ancestors. You would be amazed at how many simple "facts" a family has passed down through stories repeated at the dinner table and family gatherings turn out not to be exact in their details, having become elaborated on over time, like a game of "Telephone" that we all played as children. So we start this exciting process by carefully examining documents such as birth certificates, death records, etc., which can contain even more details about your ancestors and can provide clues to finding the ancestors you didn't know you have. In your case, we started with Harvey and Lillian's marriage. Here they are in the Idaho Marriage Index. 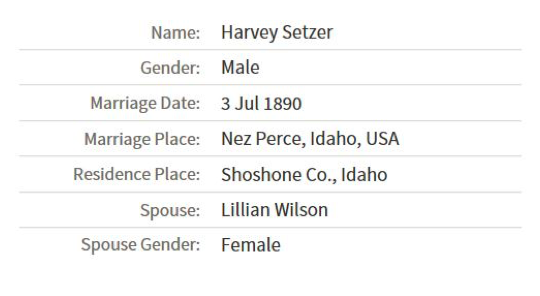 The actual marriage record doesn't tell us much more about Harvey or his wife, Lillian, so next we turned to U.S. census records.

Since the 1890 census was largely destroyed, we started our search for Harvey in the 1880 census. He doesn't have a very common name, and, fortunately for your quest, only one Harvey Setzer surfaced in the entire database: a single man, age 25, living in Leadville, Colorado, working as a miner, just as you believed your ancestor did! This was a very good sign.

Harvey Setzer on the 1880 federal census at Ancestry

A search of city directories also turned up a Harvey G. Setzer--confirming the middle initial you gave us--in Leadville, working as a miner in 1880. So it's looking like a good fit.

The 1880 census provides another clue as well: this Harvey Setzer was born in Missouri. We didn't find Harvey in the 1870 census, but he's there in 1860 with a whole family of Setzers living in Gentry, Missouri. (William Setzer, the head of household, appears on the prior page.)

The William Setzer family on the 1860 federal census at Ancestry

There's only one hitch: our 1880 Harvey claimed on the census that his parents, William and Elizabeth, were born in Maine, but the parents listed on the 1860 census said they were born in Kentucky. Knowing that the image of the 1880 census we're looking at is actually a copy made from another handwritten document, there is always a possibility that MO or another abbreviation was mistranscribed as Maine. Since so many other things that you told us about Harvey had been proven so far, we decided to keep following this trail.

Based on the children's birthplaces on the 1860 census, the Setzer family appears to have been living in Kentucky in 1850, so we searched for Harvey's parents in the 1850 census. And we found them with their oldest daughter, Catherine, along with an unnamed infant. But William and Elizabeth still report being born in Kentucky. The "Maine" in the 1880 census is looking more like a mistake. (Remember, census takers were only human, and were often overworked and underpaid, so mistakes did happen, for a whole slew of reasons. When you are convinced that the trail is warm, press on!)

Next we wanted to find a record of Elizabeth and William's marriage. Based on their oldest child's age in the 1850 census, it may have taken place around 1847 in Kentucky. In the 1850 census, William and Elizabeth are living in Hardin County, Kentucky, which was a lucky break because Hardin County's marriage records are online. And in those records, we found one for a William L. Setzer (son of John) and an Elizabeth Holloway, married 26 November 1846. As a side note, a 66-year-old John and 67-year-old Ruth Setzer were living with the family on the 1860 census, so they should be William's parents. So now, through this one record, you have learned Elizabeth's maiden name (Holloway) and her father's name (George). If the Missouri connection pans out, you can take Harvey's family back another full generation!

From here, we wanted to see if we could find when Harvey made the move to Idaho. Incredibly, we found your ancestor's name in a history of the early settlers in northern Idaho! And it puts him in Idaho before 1885. Ellen H. Richards, in her book entitled An Illustrated History of North Idaho: Embracing Nez Perces, Idaho, Latah, Kootenai and Shoshone Counties, State of Idaho, says the following about your great-uncle:

The first permanent settler in the Weippe section, it is said, was Wellington Landon, who took up his abode on the present town site of Weippe October 6, 1875. ... In 1879 Patrick Gaffney settled with his family on land contiguous to the Landon place, and later came Harvey Setzer, William Gamble, Levi Goodwin and a family named French. These were the only inhabitants of this rich grazing section until after the country was surveyed in 1884, when a small addition to their numbers was attracted to the legion.

This puts Harvey in the right place at the right time for the dreadful lynching story to be true. We were eager to see if this was so. And it turns out that this horrible event actually did occur. 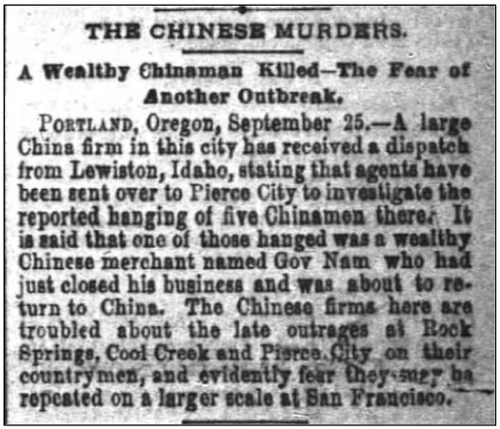 Newspapers as far away as the Atlanta Constitution (26 September 1885, shown above) reported on this unwarranted attack on the victims, including a wealthy businessman, which took place in late September of that year. But our best lead came from Bernice Pullen at the Clearwater Historical Museum, who sent us a passage from And Five Were Hanged by Layne Gellner Spencer. It tells the story much as you heard it, and while Harvey isn't mentioned by name, Gellner does provide details you can use to search for more information in additional newspapers. Or you might visit the Idaho State Historical Society and the Shoshone County Courthouse and examine county court records or the minute books of county commissioners for details about this gruesome incident.

Now, what about Harvey's death? We had no luck finding a record of Harvey's death...in the State of California. But he wasn't forgotten back home. The 22 January 1892 issue of the Albany Ledger, a Missouri paper, included a notice reporting that Harvey had died in Vista, California, on about 18 January 1892 (not 1891). 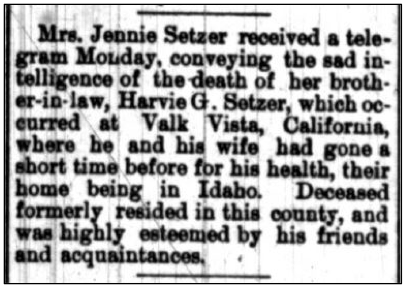 In addition, the notice reports that Harvey was survived by his sister-in-law, Mrs. Jennie Setzer. We know from census records that Jennie married Harvey's brother Palser (or Palmer). Therefore, this is the proof we were seeking at the beginning of our search, confirming that the Missouri Setzers are, in fact, Harvey's family! Sometimes the most valuable clues are buried in the smallest and least obvious places.

For more details on the lynchings, you could search in newspapers and obtain a copy of Gellner's book. You might continue your search for details about Harvey's last days and his death by looking for sanitariums in or around San Diego County, since Harvey had tuberculosis. You could also try putting in a "grave request" on the "Find A Grave" website, in case anybody happens across his headstone. And, with all you now know about Harvey's family, you can start working further back in time on both his parents' lines, uncovering more ancestors on both his mother's and his father's family trees. We happen to know that William's parents' 1819 marriage appears in the Hardin County records as well, complete with Ruth's maiden name (Harris) and father's name (Samuel). We think that you will find a wealth of detail about Harvey's fascinating family, if you decide to continue your search.

We hope that the details we've found put you a few steps closer to finding Harvey--and proving whether or not your family's legend that he was driving that wagon is true.