It's been an excellent year for street art all over the world and we've had the pleasure of seeing a lot of great stuff from both big names and anonymous sources. Eye popping, brain-teasing, challenging, entertaining, aspirational and inspirational - it's all happening at once. We've been walking the streets, meeting the artists, going to shows, curating shows, speaking to audiences, providing walls, and asking questions. It ebbs and flows but never stays the same. With the rise of the Occupy movement this autumn, we're already seeing an uptick in the number of people taking their messages to the street with a renewed intensity. 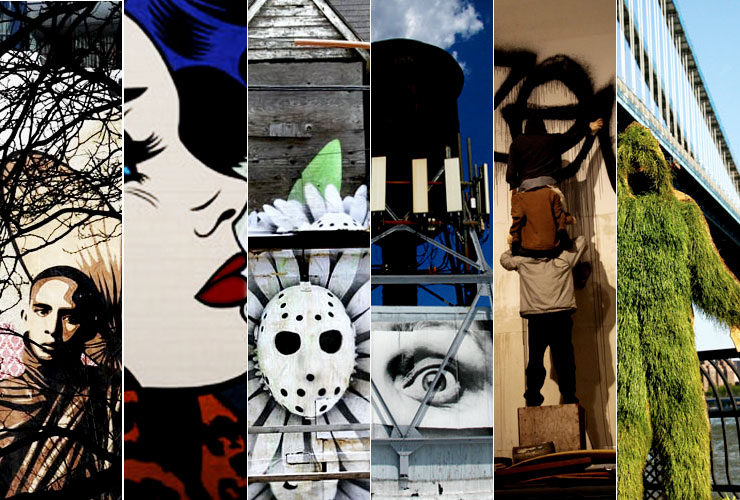 Left to Right: Shepard Fairey in Manhattan, D*Face in LA, Ludo in Chicago, JR in the Bronx, Barry McGee at LA MOCA, Mosstika in Brooklyn. All photos © Jaime Rojo

Let's take a look at some of our favorite shots, whether from a rooftop in Bushwick, Brooklyn, a block-long wall in Miami, or the "Art in the Streets" show at LA MOCA. As you sample this eye-candy platter, dig the staccato soundtrack made of sounds culled from Brooklyn's streets by electro duo Javelin, who spent a day in the Red Hook neighborhood collecting sounds and then mixed them in the back of their car. This is the kind of D.I.Y. ingenuity that is fueling the fire in artists neighborhoods all over the world, with people taking their stories and skills directly to the streets. With Javelin as the perfect auditory partner here's 90 shots by photographer Jaime Rojo from 2011.