Most farmers have their favorites. For John Chester of Apricot Lane Farms, one of his most beloved animals was a Brown Swiss dairy cow named Maggie.

Chester’s cow wasn’t just a gentle giant; she was a pregnant gentle giant. Pregnancy can be a joyful time, but for Chester, Maggie’s pregnancy was an immediate source of worry. As he explains in one of his short films from OWN’s “SuperSoul Sunday,” that fear soon became overpowering.

“I was blinded by my own level of anxiety. You know, birth is a pretty dangerous event,” Chester says.

Relatively new farmers, he points out, typically give in to their impulse to help farm animals that are giving birth. But this isn’t always the ideal way to handle labor, he explains. “An old, wise farmer once said, ‘The best thing you can do is turn around and walk away,’” he says, adding, “I’m just not entirely there yet.”

As Chester has experienced on his own farm, sometimes these animals do indeed need help.

“When my worry appears to pay off, it somehow perpetuates the notion that I am what stands between life and death on this farm,” he says. “And in Maggie’s case, this delusion of power has translated into a burden of responsibility.”

Feeling anxious and consumed by responsibility, Chester tended to Maggie as much as she would allow during her late pregnancy. “I was driving myself crazy,” he admits. “And her too.”

Sensing Maggie’s stress, Chester did a final check-in one night and then made the difficult decision to give Maggie the space she appeared to need. While she stood alone in the darkness, Chester lay restless in his bed.

The next morning, the farmer made his way to Maggie, and found her deep in the valley of the property. Her labor was over; Chester feared the worst. Slowly, he knelt down beside his tired friend and took a look at her motionless offspring.

Silently, Chester stroked the young calf. Maggie licked its head. That’s when the calf moved. He raised his head, showing that he was alive and healthy.

Chester was flooded with relief. Though worry about his herd of animals may not subside anytime soon, Chester says that this experience with Maggie opened his eyes to a valuable life lesson.

“For me, knowing when to let go of worry has never been clear,” he says. “But what is clear is that worry has no real power.”

“SuperSoul Sunday” airs Sundays at 11 a.m. ET on OWN. You can also watch full episodes online for a limited time via SuperSoul.tv.

What This Pregnant Cow Taught A Farmer About The Importance Of Letting Go
Maggie's Story: The Pregnant Dairy Cow from Apricot Lane Farms 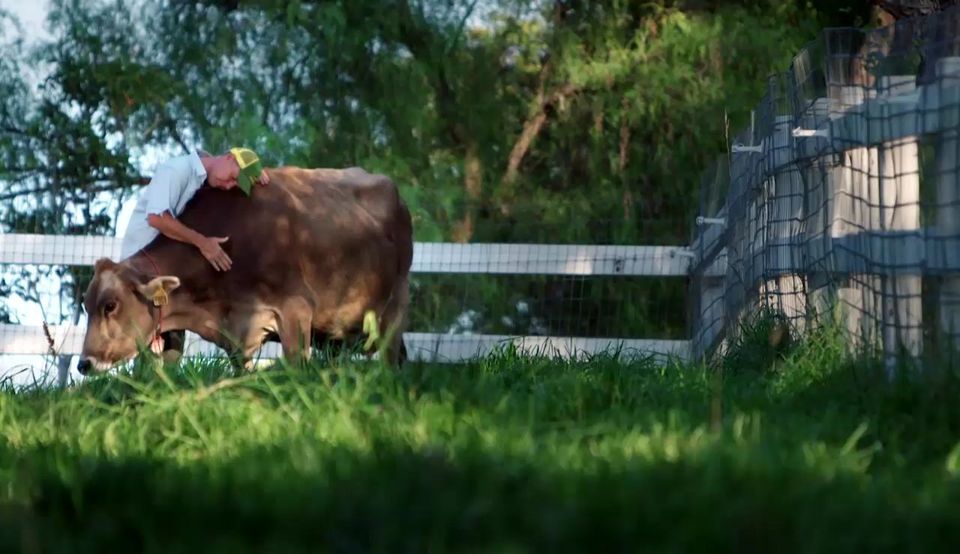