A recent White House photograph of President Obama reveals an iPad 2 resting on the Oval Office desk, showing the commander in chief is, at least in one regard, not so different from about 55 million other consumers.

According to the White House Flickr account, the president was signing the "Establishment of the Interagency Trade Enforcement Center" executive order on Feb. 28 when Pete Souza snapped the photo.

This is by no means the first time the famously-wired president has been seen with his iPad. Last Thanksgiving, President Obama was photographed with the tablet as he made calls to U.S. troops, not only providing some good publicity for Apple, but also for the DODOcase that holds his tablet.

PC Magazine reported in October that the late Steve Jobs gave President Obama an iPad 2 before it was released in March 2011. So, unless Apple CEO Tim Cook gave him a new iPad before this picture was taken, the president is likely still using the same one.

The iPad is tethered to his specially made and highly-secure BlackBerry, according to the Wall Street Journal.

The president hasn't always been a gadget fan. In a 2010 commencement address at Hampton University, Obama said he didn't know how to use an iPad and that the information it provides can be a "distraction."

"And with iPods and iPads, and Xboxes and PlayStations -- none of which I know how to work -- information becomes a distraction, a diversion, a form of entertainment, rather than a tool of empowerment, rather than the means of emancipation," Obama told students at the time. "So all of this is not only putting pressure on you; it's putting new pressure on our country and on our democracy."

President Obama isn't the only world leader to use an iPad. Last June, the pope -- Vatican City's head of state and the leader of the Catholic Church -- was photographed sending his first tweet from the tablet. 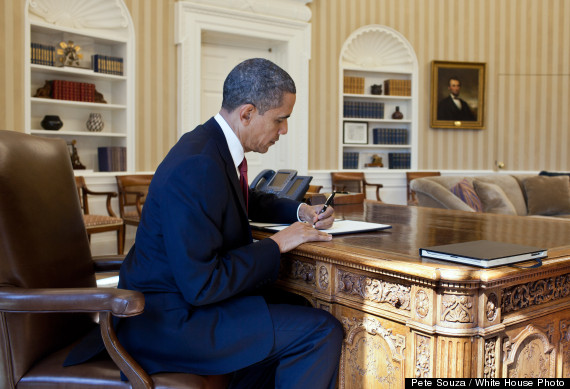