I've very much enjoyed the recent debate over Bain Capital and the role of such private equity firms in the economy, not for partisan reasons, but because it's far too rare that we step back and ask about the societal costs and benefits of opaque mechanisms like PE.

I mean, if I showed you a barber shop, a school, a car factory, an accounting firm -- you'd quickly get what they were doing here. But PE is different, and absent explanation, it's easy to get stuck on one end of the "vampire/vulture-to-capitalism's-savior" continuum. In that regard, here's one of the more nuanced, and thus worth reading, pieces about private equity and its role in the larger economy.

Note, for-the-record, that I'm not talking here about this week's debating point as to whether PE experience is relevant to the job of president -- the main point I and others have tried to bring to that debate is: whatever the merits and demerits of private equity, job creation is not part of the mix. If profitability meant laying off workers, that's what the PE firm would do, and vice versa.

In this post, I'd like to add two points to the discussion: 1) job growth and profitability, and 2) the tax implications of debt financing.

As stressed in the New York Times piece:

The business of private equity firms is buying and selling companies, all done with the goal of earning big returns for themselves and their investors. Sometimes that means jobs are created; sometimes it means jobs are lost.

This begs the question about the relationship between "big returns" and job growth. Statistically, they're both cyclical variables, and both tend to go up in expansions and fall in recessions. But to what extent is job growth a function of profitability?

Theoretically, it's not as simple as you'd think. Profits = revenue-costs, and labor is a cost. So, depending on underlying demand and the level of productivity, profitability might be enhanced by hiring more people or firing more people (the micro-theory says you hire up to the point where the value-added of the last person hired equals the revenue they produce, but that's too vague a guide in practice).

Like everything else in economics, the relationship between profitability and job growth must be evaluated empirically. The figures below compare this relationship across three different periods using yearly private sector job growth and corporate profits as a share of national income. Both variables are indexed to 100 in the base period; the profit share increase represents percentage points over the base year. 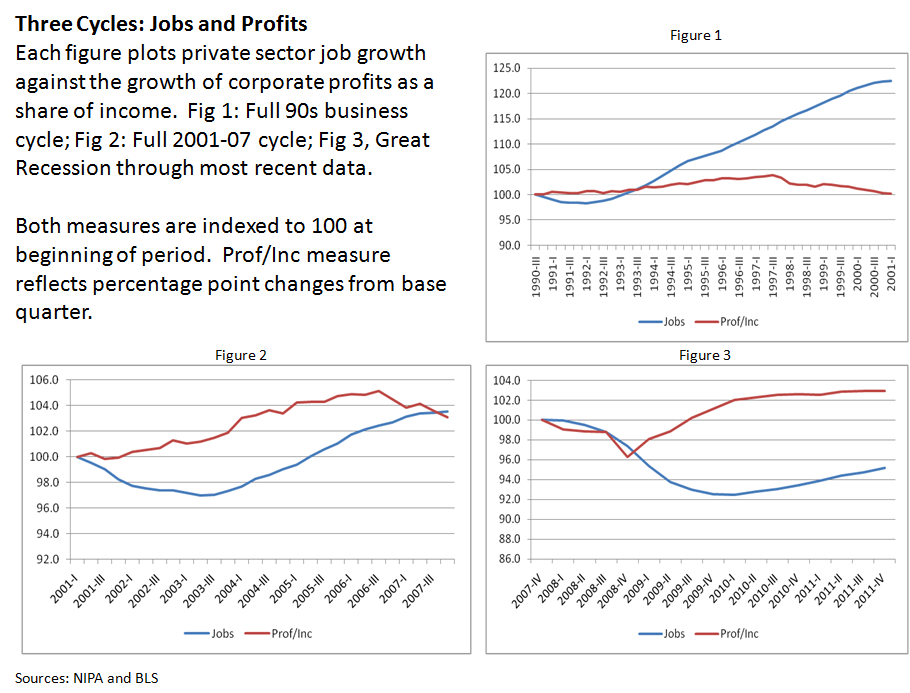 In the 1990s, profits relative to income went up a few percentage points -- about an average recovery -- but job growth was quite strong. In the 2000s, profit growth accelerated but job growth slowed quite sharply. And most recently, in the great recession and its aftermath, profits have more than recovered while employment is only slowly climbing back.

It's quite remarkable, given how damaged the economy and especially the financial sector were after the crash, how quickly profits reversed course. Of course, part of this was due to Wall Street bailouts -- financial sector profits have led the way. It's also the case that globalization enables American multinationals to ratchet up foreign profits even while the U.S. market remains sluggish. But the larger point is that solid profit growth in the current recovery hasn't given much of a lift to jobs.

Turning to debt financing, here's where I think PE as it has evolved in America (and elsewhere, though less so because of less favorable tax treatment) is truly problematic. As I stressed here, because interest on their borrowing is tax deductable, debt financing and PE are locked in a symbiotic relationship that distorts incentives and leads to levels of indebtedness that can cripple otherwise stable companies.

And the tax incentive is huge. According to the Treasury Department:

...the effective corporate marginal tax rate on new equity-financed investment in equipment is 37 percent in the United States. At the same time, the effective marginal tax rate on the same investment made with debt financing is minus 60 percent--a gap of 97 percentage points. This compares to an average difference of about 51 percentage points for other G-7 countries...

At the end of the day, I don't have a global position as to whether PE deals, on average, add value or not. Their existence in certain cases looks to me like it imposes a discipline on management that is useful in discovering efficiencies that would otherwise have gone untapped. In other cases, they seem to extract value for themselves and their shareholders in ways that do more harm than good to the company, its workers, and its community.

Either way, they're not net job creators and they sure don't need that crazily huge, hugely distortionary tax break. And if a former PE guy or gal were to run for president, I'd like to hear them emphasize those two points.