I have a daughter and a granddaughter, and I want to protect them from sexual assault at all costs. If they ever experience the horror of sexual assault, I want the law to do everything possible to bring the perpetrator to justice and repair my loved one's life.

I also have a son and a grandson, and I want to protect them from false allegations of sexual assault. False allegations happen much more than people might think or than we are allowed to discuss openly in today's climate, especially on campuses where this issue is getting overdue but not particularly balanced attention.

Unfortunately, the law does almost nothing to go after those who level false charges, and the falsely accused person's life is often damaged if not ruined.

Everyone is currently focused on the careless journalism behind the now apparently discredited Rolling Stone story of a young woman, "Jackie," who claims she was gang raped on the University of Virginia campus in 2012. 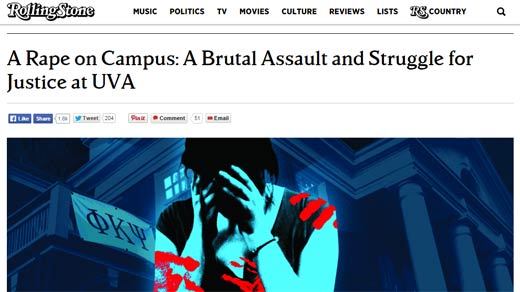 It is the Rolling Stone reporter taking all of the (well-deserved) heat. No one seems to care that a young woman may have made up a gang rape story. And certainly no one I've heard of seems to care about those accused.

A good friend of mine runs an organization that fights to get wrongly convicted people out of prison. His group has gotten 53 people released who have served an astounding total of 1,083 years behind bars for crimes they didn't commit.

My friend says often that when he was a young man, he believed everyone in prison was guilty. Now he knows better.

How easy it is to make false allegations and be believed.

The three Duke lacrosse players accused of rape by a young woman in 2006 but ultimately cleared of any charges were among the "lucky" victims of false accusations because their case was so widely publicized and so hideously pursued by the ambitious -- and eventually disbarred district attorney -- that the truth had a chance to emerge. (The accuser was convicted in 2013 of murdering her boyfriend but never charged with anything for the lie that ruined three young men's lives in 2006 and still, from prison, maintains her story was the truth.) 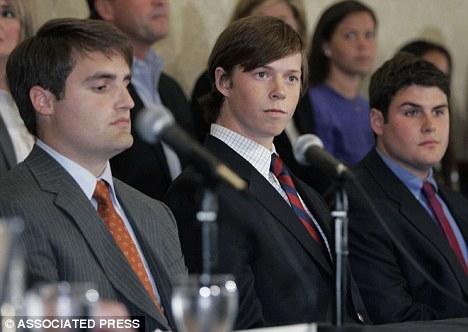 Most of those falsely accused aren't so fortunate. They either are prosecuted and sometimes convicted, or the whole thing goes away and they are stigmatized as even those close to them wonder, Did it maybe happen?

And that's the problem. Once a false accusation is in the air, people tend to believe it. Where there's smoke, and all that nonsense. It doesn't seem to matter if the smoke is there because an arsonist set the fire.

The Washington Post story which did the heavy lifting in showing the massive holes in the Rolling Stone piece stated, "A group of Jackie's close friends, who are advocates at U-Va. for sex-assault awareness, said they believe that something traumatic happened to her, but they also have come to doubt her account."

Her friends believe "something traumatic happened to her..."

We believe the allegation, or tend to believe "something traumatic happened." It could be 100 percent false, but once someone puts an allegation out there, we think, well, something had to have happened.

The statistics about false sexual assault allegations vary widely. A 2006 article in the Cambridge Law Journal showed a range of two percent to 90 percent, though most of the studies were in the high teens to low 20s. Few people seem to believe the high end, but few should believe the figure of two-to-eight percent that has appeared in some other studies.

But even if the number is eight percent, there were about 237,000 sexual assaults and rapes reported in the United States in 2010. If only eight percent of those were false reports, that's close to 19,000 people false accused.

Most sexual assault claims are true. Sexual assault is a horrific crime that ruins lives and should be prosecuted.

Falsely accusing someone is a horrific crime that ruins lives. It is almost never prosecuted.

Do we all think that is perfectly okay?