For more updates on the student-led sit-in going on at the UN conference center that has continued well into the night in Copenhagen, check out the liveblog of It's Getting Hot In Here.

A group that is part of youth delegations have begun a sit-in at the UN conference Bella Center. The statement about the sit-in posted on The Canadian Youth Delegation's Facebook page:

Copenhagen, Denmark - At 5:00pm today, during the opening of the high level segment of this year's international climate change negotiations, a group of approximately 30 international youth staged a sit-in, refusing to leave the talks until a fair, ambitious, and legally binding treaty was reached. The group included young people from both developed and developing nations, including 10 Canadians.

The young people gathered and initiated the sit-in at the main hall of the conference centre where more than 110 heads of government are expected in coming days. They immediately began to read the names of the more than 11 million people who signed a petition demanding the same fair, ambitious, and legally binding agreement that is needed to avoid dangerous climate change and usher in a global clean energy economy.

The picture below was posted by Karl Burkhart on twitter: 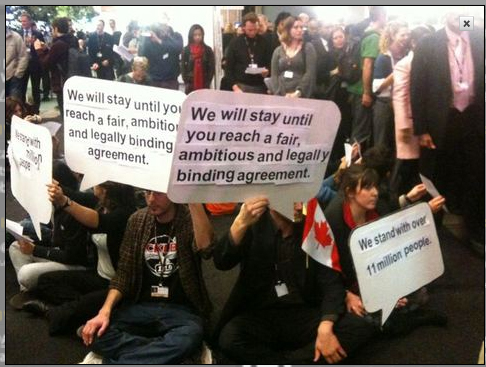 Matthew McDermott, Senior Writer for Treehugger and Planet Green reports seeing that the police have greatly de-escalated tensions with demonstrators. After containing them in blocked off area, they deliberately took off their riot helmets and began to let the protesters come and go as they pleased, and allowed people to begin talking for "The People's Assembly" where protesters and NGO representatives could talk about climate justice. This appears to be a deliberate change in tactic after police had been using aggressive methods earlier in the morning where they beat and arrested protesters and in the days leading up to this march. However, the protesters have not been let into the Bella Center.

Advertisement
UPDATE 13:50 CET
Here is video of NGOs, and some delegates walking out of the center to join protesters on the outside, including a short interview with Naomi Klein, shot by Karl Burkhart of
Greendig.com
.

UPDATE 12:54 CET Danish TV station TV2 is showing footage and reporting that police are in full riot gear and have contained 2,500 demonstrators in an enclosed area preventing them for participating in the planned march and demonstrations.

300 people who were inside the UN Bella Center have walked out in solidarity with the protesters.

UPDATE: 12:00 PM CET
Connie Hedegaard, the chief negotiator and the President of the COP15 Conference has just resigned, as reported by Reuters. She will be replaced by Danish Prime Minister Rasmussen.

Speculation in Copenhagen and on twitter about the resignation seemed to indicate confusion about if this was unexpected or merely procedural. Brad Johnson, climate researcher and blogger for the Center for American Progress says of the move, "As negotiators furiously attempt to craft a deal in time for the arrival of over 110 heads of state, this move allows Hedegaard to run closed-door negotiations while Prime Minister Rasmussen presides over the formal talks."

11:14 AM CET: Tensions are a running high at the Copenhagen climate talks this morning. Friends Of The Earth and Avaaz, leading voices in calling for "a strong and fair" climate deal, have been told their entire delegations would not be allowed into the conference. No further explanation as to why has been given. This week, UN officials have greatly limited the number of NGO representatives allowed inside the conference, but this appears to be the first time entire delegations have been banned --these groups are particularly high profile. Members of the delegation then staged a sit-in at the entrance, including French member of parliament Jose Bove, as filmed by TheUptake. This comes at the same time that Danish police are bracing for a mass protest, organized by Climate Justice Action, that will march onto the Bella Center where the UN conference is being held, attempting to shut down the talks out of protest that real solutions to the climate crisis are not being discussed. Oneclimate.net reports that protesters have already been pre-emptively arrested en mass and taken away in police paddy wagons.

Danish police have been using aggressive tactics in the lead-up to today's events, including the arrest of a high-profile organizer of today's protest on the eve of the event, and up to 1,000 marchers at a demonstration on Saturday, most of whom were marching peacefully.

Danish TV station Ekstra Bladet has a livestream of the protest on their site, which has been showing footage of police beating protesters.