Finally after decades of hope and hard work, astronomers finally discovered a planet orbiting the nearest star to our sun: Proxima Centauri. Describing it in human terms leads to some interesting problems!

The Alpha Centauri trinary star system, at a distance of 4.3 light years as the crow flies, has beckoned would-be interstellar travelers for decades with its golden sun-like star Alpha Centauri A, its orange star companion Alpha Centauri B, and the little red dwarf: Alpha Centauri C or 'Proxima'. Proxima, discovered in 1915, orbits A and B at a distance 300 times farther that Pluto orbits our sun, taking hundreds of thousands of years to complete its journey. Yet, despite its closeness to Earth, Alpha Centauri AB seem to be a celestial fizzle so far as planets are concerned despite decades of searches.

But suddenly things have changed.

For a long time the available data seemed to show there were no Neptune-sized or larger planets orbiting Proxima. It seemed doomed to be just as barren as its two brighter and more famous stellar companions. Then in 2013, astronomer Mikko Tuomi of the University of Hertfordshire uncovered a hint that Proxima was wobbling slightly as it traveled through space. Today we have the announcement by a team of ESO astronomers that this wobbling has been confirmed, and it is caused by an orbiting planet with a minimum mass about 30 percent larger than our Earth. It was also in an orbit that kept it comfortably in the red dwarf's liquid water zone. With an 11-day orbit and at a distance 20 times closer to Proxima than our Earth is to the sun, the view from its surface would be spectacular, although the planet would be gravitationally locked so that it only shows the same hemisphere to its star for eons at a time. Now comes a problem. How do we describe this world compared to Earth? 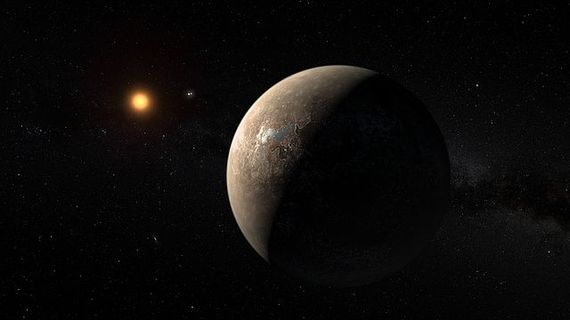 Artist's impression of the exoplanet Proxima Centauri b. The Alpha Centauri binary system can be seen in the background. (Credit: ESO/M. Kornmesser)

Earth-sized. Astronomers can certainly confirm that Proxima b has a mass slightly larger than Earth from the way that it wiggles the motion of its star. That is a mathematically precise statement. If we assume it is a rocky body similar to our Earth and the inner planets of our solar system, we can deduce that it probably has a radius about 10 percent larger than our Earth, and on its surface, gravity would be about 10 percent more, so a 150-pound person would weight 165 pounds. Again, the term Earth-sized can apply either to describe the mass of the planet or its radius. No problem so far. In fact, today we know of over 600 Earth-sized planets.

Habitable: To be habitable is more restrictive than to be merely Earth-sized. The presumption is that some kind of organic life has to be able to survive on its surface. Astronomers usually calculate for a star the size of the zone surrounding it where the temperature of a bare planetary surface can support liquid water. This is often called the liquid water-zone or the habitable zone (abbreviated 'HZ'). Being in The Zone, however, does not guarantee that liquid can exist on the surface if the planet actually has no atmosphere. Our moon is in the habitable zone of our sun but nothing can live there! So, to really be habitable, the planet needs to have an atmosphere that provides enough pressure to keep water in a liquid state. But when you look around our solar system, atmospheres can be anything from pure hydrogen and helium (Jupiter) to pure carbon dioxide (Venus, Mars). Too much atmospheric carbon dioxide or water vapor would turn even Mars and Earth into uninhabitable planets in the 'habitable zone' of our sun. A habitable planet has to toe a very narrow line by being in the right place, with the right mass/size, and the right amount of atmosphere so that something like extremophile bacteria could survive on their surface, though not necessarily a human. Today, we have identified 12 planets that are close in size to our Earth, and in their habitable zones. 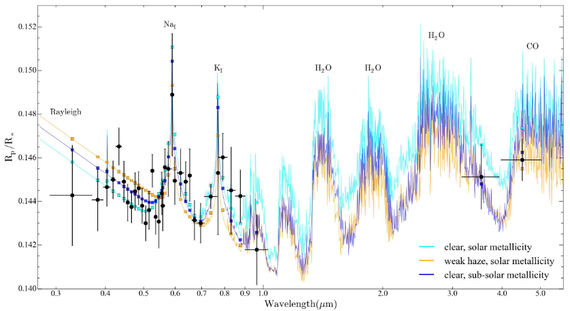 Earth-like: This is the most restrictive classification of them all. It means that not only is the planet Earth-sized and in its habitable zone, but its atmosphere has just enough greenhouse gases to keep the temperature in the liquid-water state and at a pressure close to what we experience at sea level. But there is more. If you were to visit this Earth-like world, would you expect to be able to walk its surface without breathing gear? Would a truly Earth-like world force you to live out your entire life inside a sealed habitat? To be Earth-like seems to mean that you could walk around without a cumbersome suit and your habitat need not be sealed. But this is only possible if the planet has oxygen in its atmosphere. Oxygen is a product of living organisms, so any Earth-like planet will already have a living biosphere and a recognizable oxygen-rich atmosphere.

Although we have discovered Earth-sized and habitable planets (at least survivable on their surface with spacesuits and sealed habitats), we have yet to discover an Earth-like planet. For now, the terms habitable and Earth-like remain interchangeable without any penalty. You will see this yourself in the many articles to follow the announcement of Proxima b.

But in not too many years we may actually discover our first Earth-like world. When that happens, we will have even more cause to celebrate, and no semantic problems at all!