The ad's imagery harked back to the Old West, with henley jerseys and rustic jeans displayed in faded sepia tones. And while one page touted bandanas and “Western-style” shirts, the opposite page showed a Native American sporting a feathered headdress, holding a rifle across his lap.

Critics charged that the ads reduced people, and indeed entire cultures, to mere marketing props. Many called for a boycott. Dr. Adrienne Keene, a postdoctoral researcher and citizen of the Cherokee Nation, wrote in a post for Indian Country Today Media Network that Ralph Lauren had reached a "new low."

“Ralph Lauren has been doing this my whole life,” Ruth Hopkins, a writer in her 30s who lives on the Spirit Lake Tribe reservation in North Dakota, told The Huffington Post. “He is a repeat offender. Cultural appropriation is apparently his thing.”

Following the outcry, the company removed the images from its website and apologized.

The episode neatly summed up an issue in fashion and pop culture that has drawn heated debate in recent years. Many people seemingly remain tethered to the idea of a romanticized Old West -- a time of death and carnage for America’s indigenous population.

The “cowboys and Indians” movies of the 1950s did much to solidify these tropes in modern American culture, building on centuries of stereotypes. These films mashed up the traditions of countless tribes indiscriminately, often depicting Native Americans as primitive, even bloodthirsty brutes. At best, indigenous people were depicted as noble savages, piteous characters not yet corrupted by the "civilized" world. Meanwhile, the real-life meanings attached to certain items, customs and historical figures got distorted or lost, and white Americans, for the most part, neither knew nor cared.

Take the war bonnet, a feathered headdress worn by the warriors or leaders of many Native American tribes. Each feather was earned through a sacrifice or an act of valor, making the bonnet a mark of great respect. But at the 2012 Victoria’s Secret Fashion Show, supermodel Karlie Kloss strode down the catwalk in panties, a skimpy bra and a massive war bonnet-like headdress. Chanel put headdresses on the runway in 2013, and Pharrell Williams donned one on the cover of Elle UK in 2014. Each incident was met with swift backlash.

Such cliched images are what many Native Americans in the fashion industry want to transcend.

“Mass society thinks that way,” said Bethany Yellowtail, a 26-year-old fashion designer and member of the Crow and Northern Cheyenne tribes. “They think of teepees and headdresses and feathers.”

Raised in Montana on the Crow Indian Reservation, Yellowtail wants to bring authenticity to indigenous fashion with her line B.Yellowtail, which will be released in spring. Her clothes are modern takes on the classic designs of her culture, adapting the work of her ancestors to the 21st century -- for example, designs based on the beadwork of her great-grandmother, who lived in the 19th century.

“Our original designs were purposeful,” she said. “The colors, the designs -- everything has a specific meaning and a spirit connected to it.”

“I wouldn’t take the Pope’s hat and put it on the runway,” said Michaels, who is based in New Mexico. “I think that’s where taste comes in, as far as a designer. Do you really want to put a war bonnet on a female model? If you’re going to be distasteful and have no regard for somebody’s culture, it’s shameful.”

When Michaels describes her designs, it’s clear that everything has a meaning. Her “Elk Antler Cape” strives to portray the beauty and grace of indigenous hunters and the animals that give their lives. An “Ink Drip Top” on silk charmeuse represents contaminants invading once-pure waters. A flowing, hand-painted organza skirt symbolizes the years that Michaels' ancestors spent observing and preserving nature. 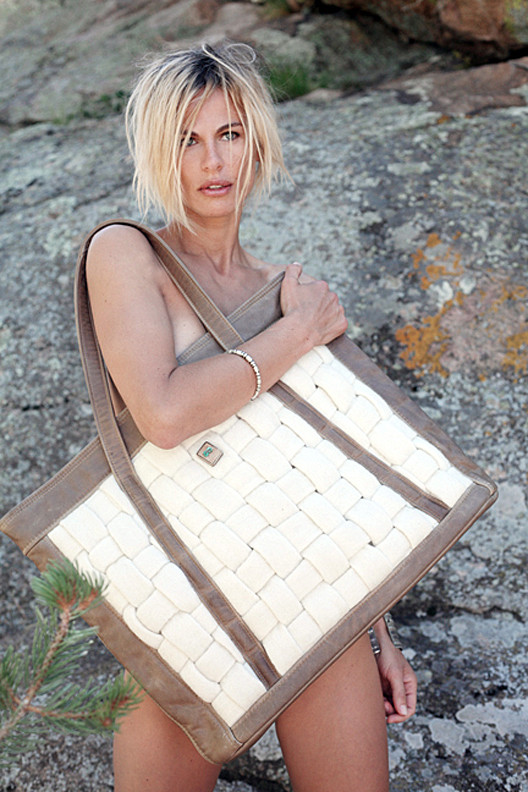 Meanwhile, Ralph Lauren’s “Pawnee jacket” -- an item that appeared in the controversial RRL ads last month, and one that shares a name with a Midwestern tribe -- was described in the ad copy as "a faithful wool/nylon jacket modeled after a 1930s sporting coat.” It’s unclear if any Pawnee people had a role in designing the jacket. A search for "Pawnee" on the Ralph Lauren website now yields no results.

The famed designer behind his eponymous brand built his fashion empire on images of classic Americana, clothes that evoke the idyllic American dream. Many of his brand’s designs succeed in that -- from preppy polos to denim workwear -- and his Navajo prints of the 1980s popularized many indigenous patterns.

But where’s the line between celebration and appropriation? Last year, Ralph Lauren released another collection that raised some eyebrows. It had lots of Native American imagery, like headdresses and totem poles.

A representative for the Ralph Lauren company declined to comment for this article. Lauren himself, though, addressed his love for Native American aesthetics in an interview with the Associated Press last June. The designer reflected on his years growing up in the Bronx, New York.

The Native American aesthetic is clearly a big part of Lauren's life. His Double RL Ranch in Colorado is chock-full of tents and artifacts, and there's even a decorative vintage photo of a nameless Native American child. After the ranch was featured on "The Oprah Winfrey Show" in 2011, Dr. Jessica Metcalfe, writing at the blog Beyond Buckskin, dubbed the photo the "ultimate form of appropriation."

“There’s a national delusion that we’re all dead and vanished,” said TallBear, a member of the Sisseton Wahpeton Oyate in South Dakota. “We are contemporary, living people.”