The project was born in the summer of 2014. Rosa Montesa, an industrial designer from Valencia, Spain, in her 50s, proposed an idea to her mother: Why not work together to make a dress for the traditional Valencian Fallas celebration? She wanted to collaborate to make something, but not in a conventional way. She wanted to do it her way, and her way was recycling.

Montes spent the following year working on her website, Reciclado Creativo (Creative Recycling), and looking for a way to breathe new life into the materials she was taking from her own trash and that of those around her. Plastic bottles, coffee capsules, potato chip bags, sunflower seed shells … all received new life in her hands. First she made a necklace, then a lamp and later flowers.

Eventually, Montesa decided to focus all her creativity on one project: a dress, which took her only 10 days to create. However, she required far more time for collecting the materials, and designing the dress posed more than a few head-scratching obstacles. Her 17-year-old daughter served as a model, and Montesa's mother acted as an integral collaborative partner.

“She was always making fallera clothing for me and the family, and I knew that she’d help me do this while respecting the tradition,” Montesa explained in a phone conversation with The Huffington Post Spain. The Valencian Fallas festival traditionally requires elaborate costumes for both men and women.

Deciding how to create a base for the dress was their greatest challenge. “It was the biggest problem we had. I thought of sculpting a base out of containers and plastic bottles, but my mom told me that it had to be over a fabric," Montesa explained. "I said that it didn’t feel right, and that everything had to be recycled material. So we decided to use a glasilla -- the fabric used in haute couture to make the dresses around the models, which is then discarded,” she explained.

With that issue solved, the creative pair had the task all sewn up (pun intended). 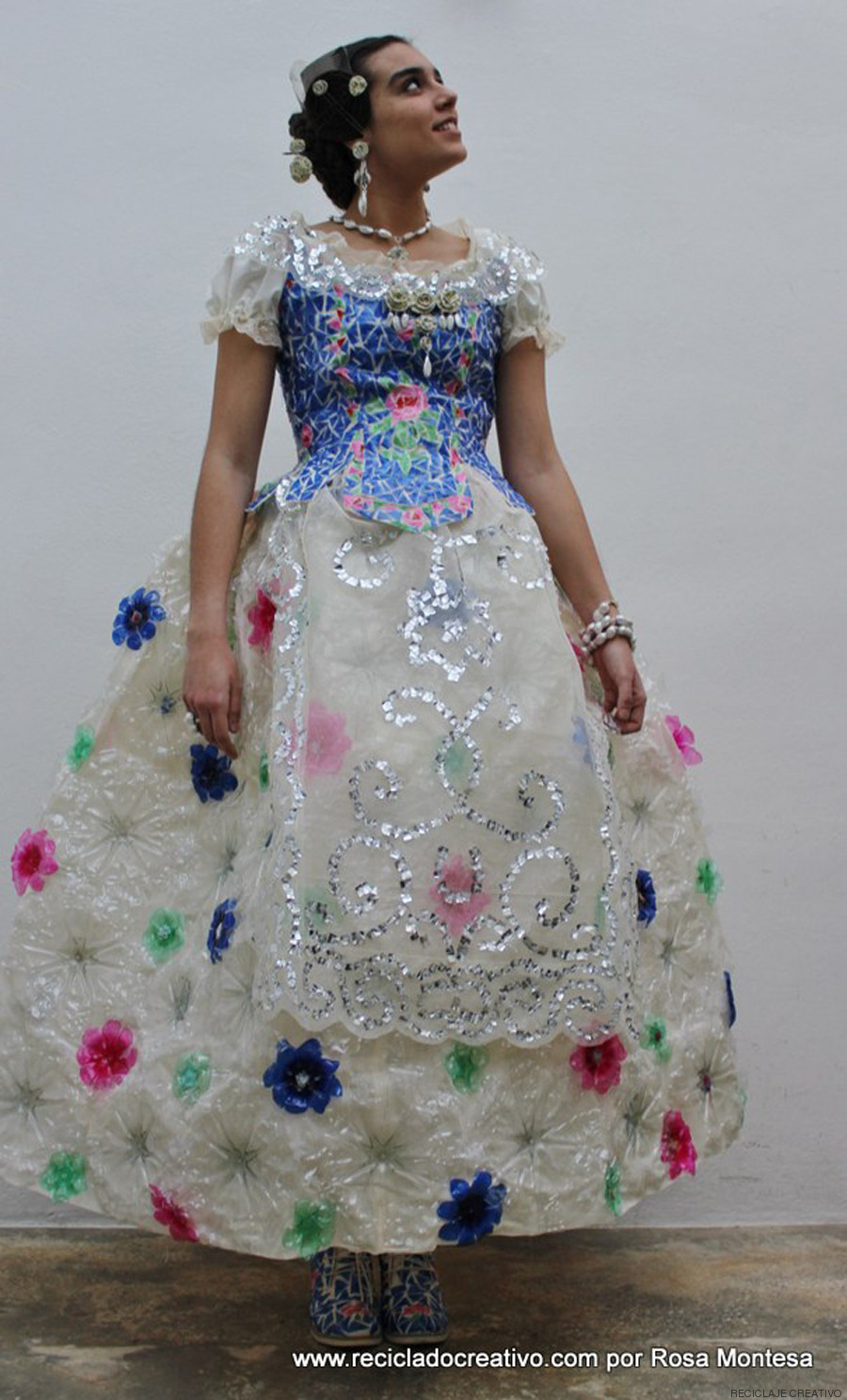 The fabric of the skirt was filled with flowers made of plastic bottles and containers. There are a total of 180 bottles: 70 plastic water containers, 25 blue water bottles, 25 pink water bottles and 60 green sparkling-water cans.

“I used the bases of the bottles, and with the upper part I decorated the bodice,” Montesa explained. Cutting the bottle into small pieces produced the fragments that form the image on the body of the dress. They were inspired, she says, by the flowers sold in front of North Station in Valencia.

The same plastic fragments served to give color to a pair of shoes that Montesa’s sister-in-law had given her and that, she confesses, had been abandoned in the closet for more than two years. 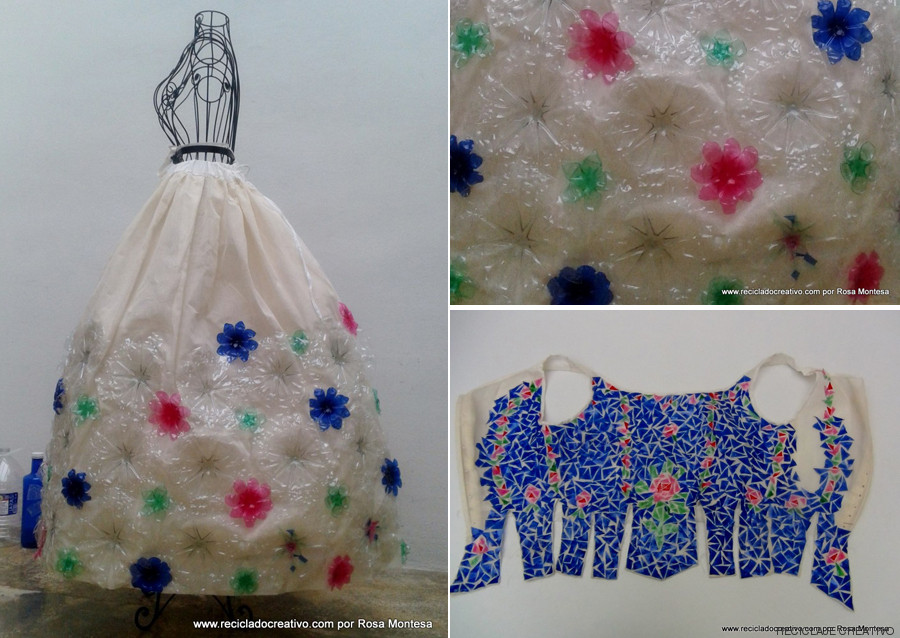 The glittering pieces on the shawl and apron, which could easily be mistaken for sequins, were made from the insides of potato chip bags. This time she only needed six: “I used baked chips, because they have less oil.” The lace is from a blouse that Montesa’s mother had at home, “adhering to the condition of using recycled material.” 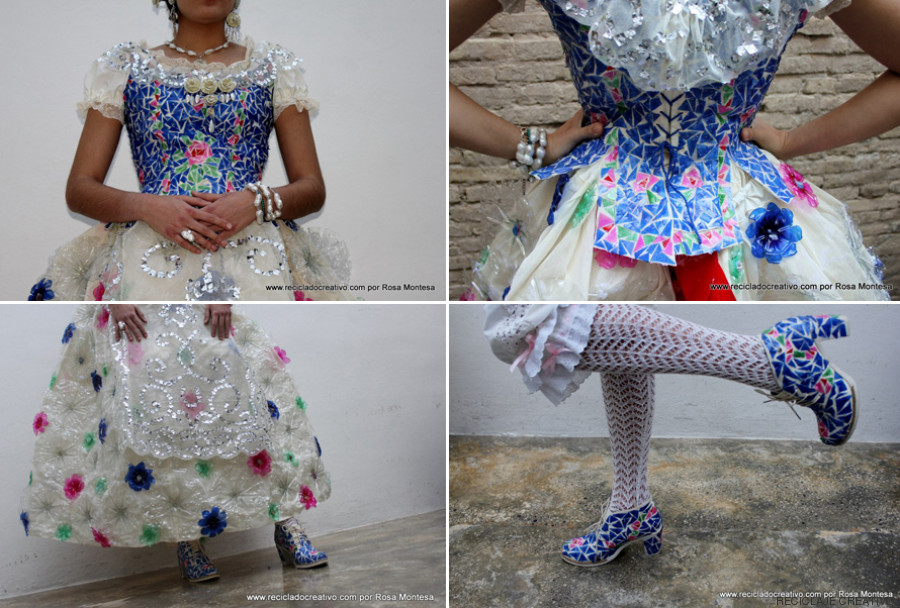 Having done all this, Montesa’s only remaining obstacle lay in making the accessories. The earrings (arracabades), brooch (joja), necklace, chignon needles (agulles) and combs, traditional elements of the festival costume, were all made entirely of recycled material. “The skewers are knitting needles from my mother. They’re made of steel, which is no longer used because it’s heavier -- now they prefer aluminum,” she explained. The flowers that completed the needles were made entirely from coffee capsules. Montesa used a total of 30 capsules to bejewel the chignon needles.

The flowers decorating the earrings and the necklace were also made of this material, and were topped with sunflower shells painted with nail polish, creating an iridescent effect. The same coating was applied to an object containing about twenty peanuts, which was originally going to form a necklace, but, failing to convince its creator, ultimately became a bracelet. 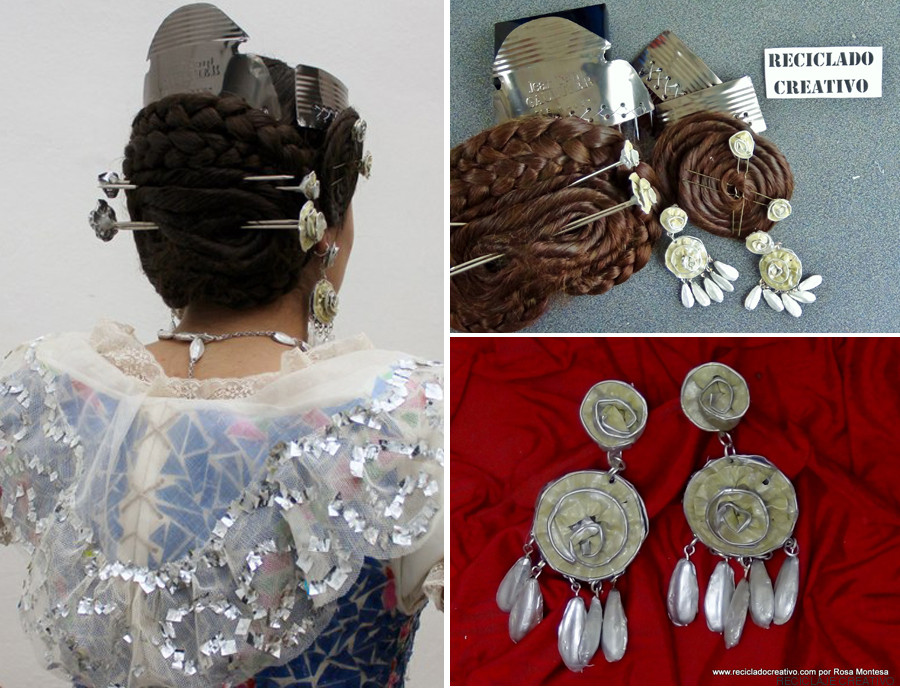 The dress arrived at its final stages toward the end of January, after several delays. “I’ve had interruptions because of lack of material, lack of space to work, and then the holidays,” explained Montesa, for whom even unforeseen obstacles posed no deterrence: “But it’s well known, there’s no misery in a labor of love.”

Montesa said that she enjoyed making the dress very much, and will enjoy it even more when she sees it out in Valencia. “The daughter of a friend is going to wear it to the Falla in my neighborhood."

This article was originally posted on HuffPost Spain and was translated into English. It was adapted for an American audience.