The number of Republicans who call themselves supporters of the tea party has dropped 20 points in the last four years, a new survey from Gallup has found.

A 48-percent plurality of Republicans now either express no opinion or say they neither support nor oppose the tea party, a jump of 14 points since 2010. While Democrats and Democratic-leaners have grown more solidified in their opposition, they have not had as big a swing as GOP voters. 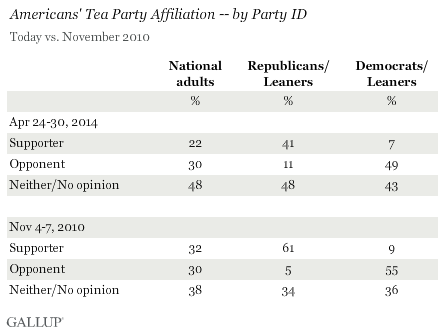 According to Gallup, the tea party's remaining supporters are demographically similar to conservative Republicans. That similarity cuts "across most demographic categories," says the survey, "including race and ethnicity, income, age, education, or region of the country. Republican tea party supporters are somewhat more likely to be weekly church attenders and slightly more likely to be men."

Gallup's telephone survey was conducted from April 24-30 among 1,513 American adults. Among this sample there were 1,336 registered voters.