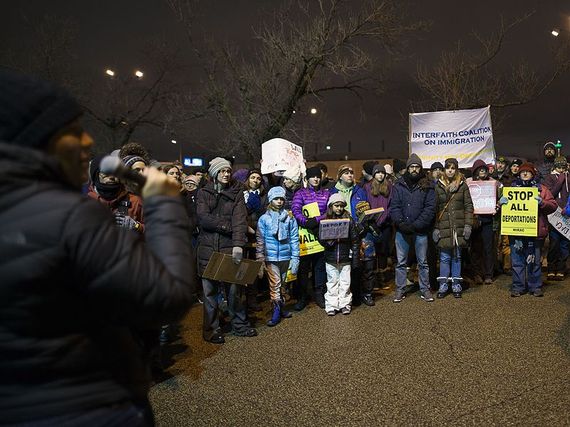 The best and the worst of the United States is on display street by street, airport by airport, in our legislatures, courts and the White House itself as we contend over the #MuslimBan and the future of our democracy.

I want to very clear. I do not believe this is a fight over opposing principles, or a disagreement on "how to keep America safe." It is part of a strategy to take down our democracy. It is that stark.

The very soul of this nation is in peril.

Countries, like individuals, can have souls. The soul is not, in my view, a "ghost in the machine" but rather the way in which actions and values match or do not match. That's why we can say, "he sold his soul" when someone chooses greed over principle.

Now, of course, the "soul" of the United States has always been at best aspirational; it is very frayed and worn from the awful conflict between freedom and slavery, equality for all and extremes of wealth and poverty, and "inalienable rights" versus discrimination. Very often, the aspirations have not matched the actions at all.

Nevertheless, what we are seeing played out in in this country today is a profound struggle for this nation's soul against those who would sell it for financial and political profit.

The protests are the best of America standing up against the worst, people holding fast to the ideal of freedom of religion, of the very words inscribed on the Statue of Liberty, "Send these, the homeless, tempest-tossed to me." Will we make that a lie?

We see organizations dedicated to the defense of the Constitution, such as the American Civil Liberties Union, going to court and winning a partial victory against the poorly conceived Executive Order on the Establishment Clause ("no religious establishment") in the First Amendment.

That's the soul of America. It's bedrock.

I believe with all my heart that this is a profound struggle is between the principles of democracy and an effort to shake the fundamental institutions of this country to allow run-away greed to dominate.

Nothing does that better than constant shocks to the indispensable institutions of a democracy. In a rapid-fire series of Executive Orders in the first few days of the Trump Administration, shocks to the system have been systematically applied. Not to change it. To bring it to its knees.

Why? As Naomi Klein explains so well in her book Shock Doctrine: The Rise of Disaster Capitalism "shocks" are applied to a democratic system to destabilize it, or shocks such as environmental catastrophe are exploited (think Hurricane Katrina), in order to allow predatory, unregulated capitalism to make as much money as possible.

A very telling quotation from Stephen Bannon, Trump's senior advisor who now alarmingly has been appointed to the National Security Council, illustrates why these Executive Orders have nothing to do with 'keeping America safe' and everything to do with destroying democratic institutions.

Proclaiming himself a Leninist he went on to explain:

"Lenin," he answered, "wanted to destroy the state, and that's my goal too. I want to bring everything crashing down, and destroy all of today's establishment."

Since bringing "everything crashing down" helped create the conditions for today's Vladimir Putin in Russia, this statement should be greeted with alarm and unified resistance.

We cannot exchange the soul of this country for the nearly unlimited wealth of a few and the poverty of many. We cannot exchange our national aspirations of religious, cultural and racial diversity for the ugly re-branded ("alt-right") white supremacism of a Stephen Bannon and his minions.

The legend of Faust is highly suggestive. Faust was a scholar dissatisfied with his life who made a pact with the Devil to sell his soul for unlimited power.

The terrors of that fable are what we really need to fear today, not Muslims and immigrants.

Don't let America's soul be sold so a few can indulge in greed and tyrannical power.