Set for release on September 30th from the Vertigo imprint of DC Comics, The Alcoholic chronicles Jonathan Ames' semi-autobiographical descent into writing and alcoholism with a backdrop of his family life, relationships and various misadventures.

Illustrated by Dean Haspiel (who illustrated Michael Chabon's Escapist), The Alcoholic is alternately poignant and hilarious, walking the reader through the life of the fictional version of Ames (aptly named "Jonathan A."). Reminiscent of Craig Thompson's Blankets in quality, tone, look and color (except the hero is struggling through sex, drugs and alcoholism instead of the coming of age conflicts of reality versus religion), this graphic novel is a must read for any fan of the growing literary wing of comic books.

The Alcoholic starts his drunken stupor to "feel cool" and lose the "nerd part" of himself, but continues his plunge into drugs and alcohol because it seems that that's simply what writers do. Jonathan A. goes through a Hemingway stage where he gets into brawls, travels the road during his Kerouac phase, all the while descending further and further into despair. But as we watch this decline, we sympathize because Ames and Haspiel make it seem so reasonable and natural that we simply can't help it.

The book grabbed me on a personal level from it's disorienting opening (which is previewed here on the MTV blog) and involved me so much into the life of Jonathan A., that I almost felt that I was there, even when I didn't want to be.

The graphic novel boils to a point after the events of September 11, 2001 and Jonathan A., looking for answers on the streets of New York, runs into Bill Clinton who offers him sage-like advice in the wake of the tragedy. After picking up the pieces of the lives of himself and those around him affected by the attacks, he runs into Monica Lewinsky at a book reading. It's fine at first, but quickly turns awkward and hilarious, but the great thing about this book is that it can switch emotional gears on a dime. Right before these pages you're almost ready to cry and then Ames hits you with this scene that DC Comics and Vertigo have graciously given us an exclusive look at: 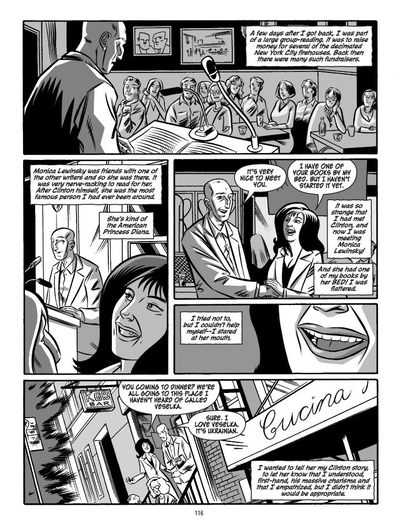 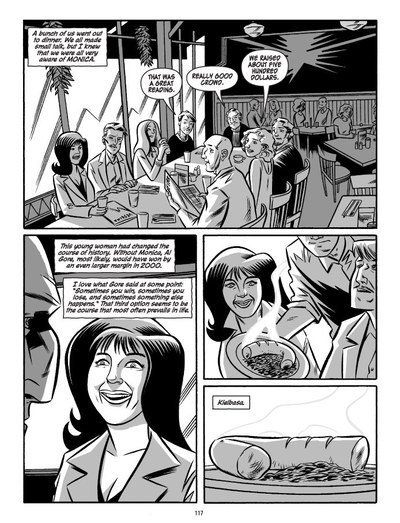 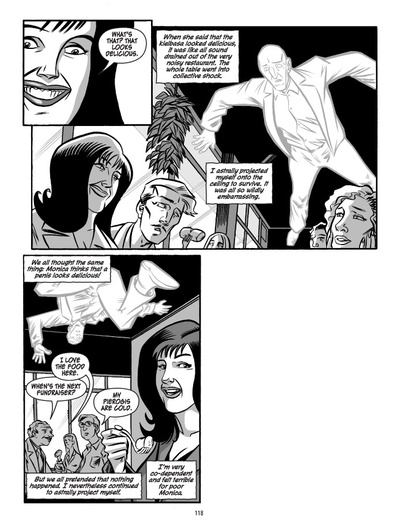 When I saw that, I knew I had to share it with the readers of Huffington Post. It was funny and more than a little sad all at the same time.

Long story short, this is a graphic novel of a literary caliber and tells a very sad, sweet story of a writer finding himself. Whether any of this stuff actually happened or not, it's an engaging ride and represents the future of a significant portion of the medium.

(Bryan Young is the producer of Killer at Large and writes about comics daily at Big Shiny Robot!)