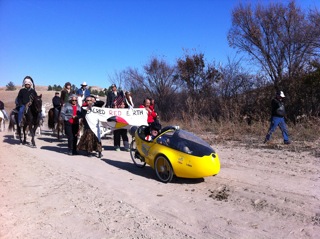 Lakota horseriders and the Rocket Trike

"And today, I'm directing my administration to cut through the red tape, break through
the bureaucratic hurdles, and make this project a priority, to go ahead and get it done."
- President Obama, speaking about the southern leg of Keystone XL in Cushing, OK (March 22, 2012)

"If I'm President, we'll build it if I have to build it myself."
- Governor Romney, commenting on the Keystone XL pipeline in Pittsburgh, PA (May 4, 2012)

If you missed the 10-week "Rocket Trike Diaries" video series of my 2,150-mile ride down the proposed Keystone XL pipeline route, I have rolled the highlights into some of the most raw and compelling footage you will ever see on Keystone XL. Watch this 15-minute YouTube film profiling the powerful voices of front line families threatened by TransCanada's toxic tar sands pipeline and ask yourself how we can let this happen.