When Roger Ebert passed away on Thursday after a long battle with cancer, he left behind a legacy as the nation's most important film critic (take Obama's word for it). He also left us with a treasure trove of quotes, flashes of wit and wisdom culled from the work of a man who spent his life rendering movies understandable for a nation.

Some of this memorable sayings were pertinent to his industry (“No good movie is too long and no bad movie is short enough"), but others were simply statements to live by ("Your intellect may be confused, but your emotions will never lie to you").

Take a look at our favorite Roger Ebert quotes in the gallery below, and share yours in the comments. 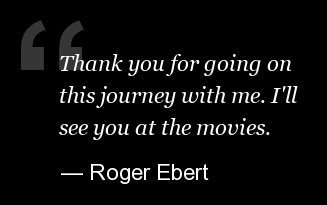