A person claiming to be the hacker who obtained access to Alaska Gov. Sarah Palin's private Yahoo e-mail on Tuesday has posted a supposed first-person account of the hack, revealing the relatively simple steps he says he took to crack the private e-mail of the Republican vice-presidential candidate.

The story was briefly posted Wednesday to the 4chan forum where the hack first surfaced. Bloggers have connected the handle of the poster, "Rubico," to an e-mail address, and tentatively identified the owner as a college student in Tennessee.

Threat Level was unable to reach the student by phone because his number is unlisted. A person who identified himself as the student's father, when reached at home, said he could not talk about the matter and would have no comment. The father is a Democratic state representative in Tennessee. Threat Level is not identifying them by name because authorities have not identified any suspects in the case, and the link to the student so far is tenuous.

As detailed in the postings, the Palin hack didn't require any real skill. Instead, the hacker simply reset Palin's password using her birthdate, ZIP code and information about where she met her spouse -- the security question on her Yahoo account, which was answered (Wasilla High) by a simple Google search.

Below, a step-by-step guide to how easy it was to reset the Governor's password — given how public her birthday and zip code are, and the relative ease of her secret question: 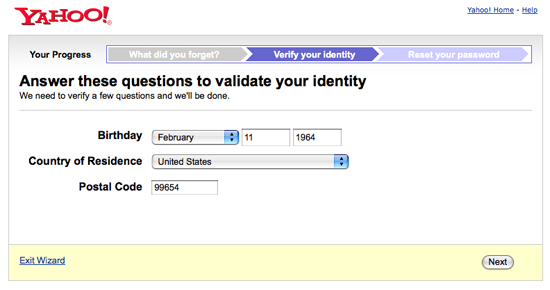