A website that analyzes and reviews K-12 schools and colleges in the U.S., Niche.com, collected data to find which 25 high schools throughout the entire country produce the highest SAT and ACT scores. The information is based on self-reported scores from 75,834 test-takers at 909 schools from 2012-2014. In order to be considered in the findings, a school had to have at least 100 students submit their scores. 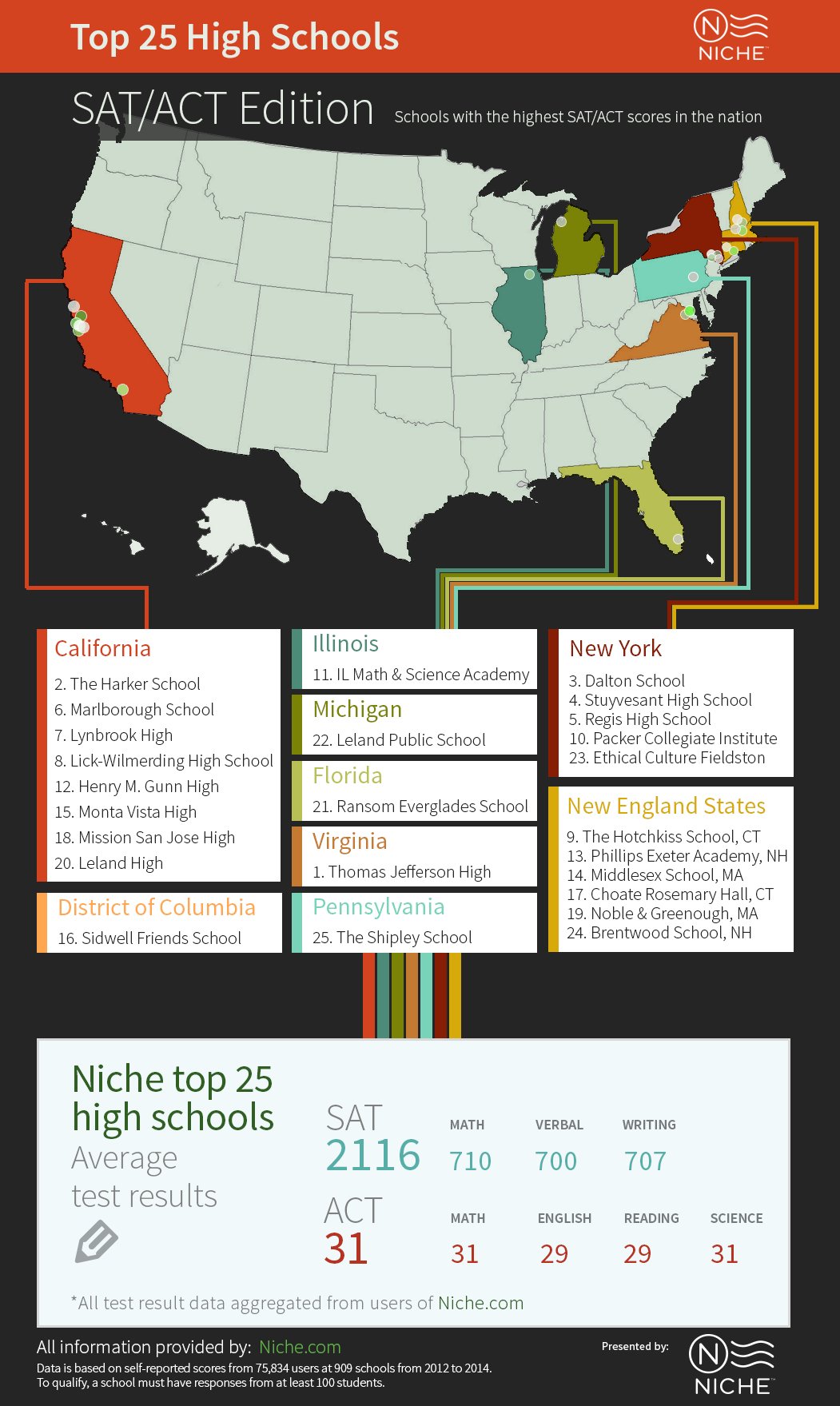 Packer packs in the best of the best when it comes to standardized test scores. The average SAT test result is 2100, with average scores of 700 in math, verbal, and writing.

9. The Hotchkiss School in Lakeville, Conn.

At this coed boarding school for grades 9 through 12, the curriculum is designed solely to prepare students for the most challenging colleges and universities in the country. The school’s average test results demonstrate this commitment: 2110 is the average SAT score. Students go on to prestigious institutions like Georgetown, Stanford, and Middlebury College.

Lick-Wilmerding has been around for more than 100 years, encouraging students to explore their emotional and physical selves through visual and performing arts and athletics. With an average SAT score of 2130, some students remark that the teachers go the extra mile in helping students understanding subjects.

Of the high schools in California, Lynbrook performed 98 percent better in math and reading on standardized tests, with an average SAT score of 2140.

As the oldest independent girls’ school in Southern California, Marlborough is a breeding ground for excellence, with the average GPA ranging between 3.5 and 3.86 and average SAT scores of 2110. Many of the young women here go on to schools like Brown, Columbia, and Yale.

This Catholic high school for boys has stellar average SAT scores of 2190, and a trusting environment for learning, according to this student review.

As one of nine selective public high schools in New York City, this school is designed to serve the needs of academically and artistically gifted students. It has a 100 percent graduation rate and performs better than 100 percent of other schools on New York standardized tests, with an average SAT score of 2170.

Claire Danes. Anderson Cooper. Eric Schlosser. These are just a few of the prominent alumni from this school, where the average SAT score is 2190.

This private prep school is home to students from kindergarten to senior year of high school. Students at Harker typically have a GPA range between 3.6 and 3.9 and an average SAT score of 2210.

TJHSST was established in 1985 as a result of a partnership between businesses and schools created to improve STEM education. With an average SAT score of 2220, TJHSST students go on to such prestigious schools like University of Pennsylvania, Harvard, and Yale, just to name a few.

This article has been updated with additional information about Niche.com's methodology for the rankings.