Ever since the discovery of the Great Pacific Garbage Patch about 25 years ago, there have been ever-increasing efforts to prevent trash - especially plastics - from entering the oceans and the waterways that feed them. So when Japanese officials recently reported that over 15,000 plastic containers had washed ashore, mostly from neighboring South Korea and China, since January of this year, there was some obvious call for alarm. To make matters worse, some containers were labeled "hazardous" or "oxidizing agent," and bore chemical symbols for hydrogen peroxide solution and nitric acid. On top of that, beach cleanup crews discovered almost 1,000 butane cigarette lighters in the debris. 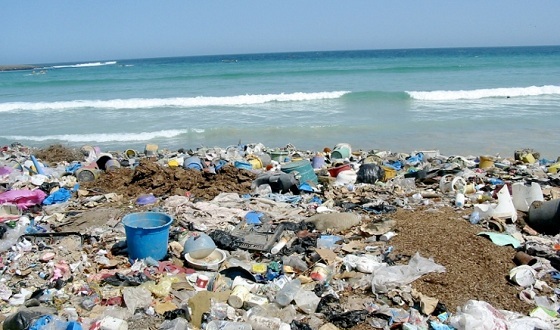 Clearly whatever measures Japan's neighbors have been taking to stem the flow of trash into the ocean have yet to be effective. According to a Wall Street Journal article from earlier this year, China is the world's largest producer of marine debris, followed by Indonesia. According to their study, the coastal population of China generated 8.82 million metric tons of mismanaged plastic waste in 2010, about 27.7% of the world total. Of that, between 1.32 million and 3.53 million metric tons ended up as marine debris. In the Japanese prefecture of Okinawa, approximately 80% of beach detritus is from China.

From 2010 to 2013, when Japan's Environment Ministry collected data from field surveys to identify the source of the debris, approximately 50% had come from South Korea, with the other 50% being split between Japan and China. Of the 15,000 plastic bottles collected this year, a third of them have originated in South Korea. Another study by the Tokyo University of Marine Science and Technology, indicates that South Korea is responsible for 85% of the refuse that washes ashore on the Japanese coasts. The Japanese government disposes of 100,000 tons of seaside trash annually. This trash is reaching as far as the coast line of Kyushu Island to the north and western parts of Honshu Island. These coastal areas are facing the Sea of Japan and the local Japanese people are working had to clean-up of the drifted debris. Unfortunately though in the last few years South Korea has been spending its time trying to get the name of the sea changed to 'East Sea' while there are more important issues at hand with the state of the environment.

Ironically, one of the suspected contributors to the problem is an industry long known for its mild environmental impact: seaweed farming. Edible seaweed is grown on ropes that are stretched just below the surface of the water in rows and seeded. After harvesting the seaweed, the ropes are cleaned with a disinfectant before being re-seeded. If the plastic jug of disinfectant isn't properly disposed of it's likely to end up on Japan's beaches.

According to Seafoodwatch.org, South Korean fisheries and aquaculture are usually regulated by fishing village cooperatives that lease farming sites to individuals for "unspecified aquaculture," resulting in a lack of regulation and enforcement of aquaculture activities from higher levels of government. Also, if the coastal seaweed farmers lack recycling or trash collection alternatives generally provided by municipal governments, it's easy to see how the ocean might be viewed as a convenient dump. Considering that roughly 90% of Korean seaweed, both Undaria (known as miyeok in Korean, wakame in Japanese) and Pyropia (gim in Korean, nori in Japanese) is grown on the country's southernmost shores, Japan's western beaches would be the first stop for any seagoing debris, floating with the northerly Kuroshio current. Similarly, trash that enters the Yellow Sea from China's shores hitches a ride to Japan on the same prevailing currents, which are often likened to the Gulf Stream in the eastern U.S. because they transport warm water northward.

While nobody wants trash washing up on their beaches, it is probably preferable to having it get caught up in one of the ocean's many gyres, like the Great Pacific Garbage Patch. Once trash gets caught in the giant circular currents of the gyres it is far more difficult to remove than beach trash. Plastics are particularly troublesome. According to a 2014 National Geographic study, there are 5.25 trillion pieces of plastic weighing 269,000 tons floating around in the world's oceans today. The Ocean Cleanup cites some staggering impacts:

Plastic is estimated to take up to 450 years to biodegrade. Meanwhile, small plastic particles sometimes referred to as "nurdles," act as toxic sponges, soaking up oil, gas, chemical and other poisons. Once in the food chain, the toxins bio-accumulate, resulting in even higher concentrations inside fish. According to the NOAA, nurdles have already been found in small fish, plankton, shellfish and sea birds, and it's only a matter of time until toxins find their way into our seafood dinners.

In Japan, the immediate problem is rapidly overwhelming both cleanup manpower and waste management facilities. While Japanese scientists investigate ways to turn plastic into an energy source, global organizations like the Ocean Conservancy, The Surfrider Foundation, the NOAA and national groups like Japan's Environment Ministry are actively engaged in cleanup operations year round. One such group, Dutch-registered nonprofit organization The Ocean Cleanup, has developed a trash collector which promises to clean up the world's oceans in just 5 years, beginning in 2016.

Regardless of whether the trash is gathered at sea or from the beaches, there remains the thorny question of what to do with it. Japan has a reputation for being obsessed with cleanliness: citizens carefully sort their garbage into burnable, non-burnable and recyclable bins. At sporting events, spectators are expected to pack their trash out with them, sort it, and dispose of it at home. Nonetheless, much of the trash found on Japanese beaches originates elsewhere in Japan. What is the more important issue here: cleaning up the sea and making sure it isn't polluted further or changing its name? Governmental officials from South Korea and Japan are scheduled to discuss the issue in the coming months.