If the line "An openly gay athlete walks into Seton Hall..." sounds familiar, it's because I've told you this story before. However, everything old was new again this week, as Derrick Gordon announced that he's transferring to Seton Hall University. The first openly gay Division 1 basketball player has decided that he's going to play ball with the Pirates, a decade after my time there. So, a reflection, then.

I grew up closeted, Catholic, and conservative, a boy in the Catskills. I self-identified as a Republican, against what now would appear to be better judgement. In a small town though, I was every bit the big fish. In selecting colleges, I wanted to keep my toes in familiar waters, because that's safe. But I also saw that Seton Hall didn't have an organization for gay students, so I knew, well to be honest, I capital-k "Knew" in my heart that I could just make it happen, easy. Big fish, jumping into the ocean.

I settled into classes, started playing hockey on a club team, kissed my first boy. You know, the normal events when you go to Catholic school. The rules on co-habitation worked out well, because I never had to worry about signing girls into my room. I'm just saying, hate the game, not the player.

I was coming back from a hockey game and found that my dorm room door had been vandalized, painted red with words like queer and homo, and faggot. Well, I actually believe the spelling was faget, which, now, is sort of comically brilliant as I remember it. Regardless, it was pretty terrifying, coming from the place where I'd lived. I was alone in my dorm room that weekend, and heard every creak and squeak in the hallway with the most visceral of emotions, afraid that I was going to be attacked if I left.

And Seton Hall willingly chose not to investigate this as a hate crime. They investigated it as vandalism, planned a town hall where people could talk about respecting each other's property. And that's not good enough. It's cowardly. And in the year that followed, it happened to more than a handful of other students.

I started laying the groundwork for a gay-straight alliance, the work that I had wanted to do when I arrived. But now there was a need for it, students were being marginalized and beaten down, and the University charged with protecting its students was failing them outright.

I contacted other Catholic colleges and Universities across the country, pulling language from the mission statements of their gay-straight alliances. No matter what Seton Hall says, there is an intersection to be found between the gay community and the faith community; there are gay and lesbian Catholics and straight Catholics and bisexual Catholics and transgender Catholics. And other colleges, like Notre Dame, have had these organizations for many, many years.

Seton Hall rejected our application for University recognition, telling us that a focus on only one part of a person marginalizes the totality of our being. All the while, the Black Student Union, Italian Student Union, and other organizations continued to receive official University recognition and funding. And even though Seton Hall receives both state and federal funding, and their University handbook states clearly that they uphold all state and federal rules governing discrimination, including sexual orientation, Seton Hall is a bona fide religious organization. And just because they say they don't and won't discriminate based on sexual orientation, you can take my word on this, they do. And they will.

I sued Seton Hall. And you know what? They deserved to be called out for discriminating against gay and lesbian students, by someone who experienced it directly. 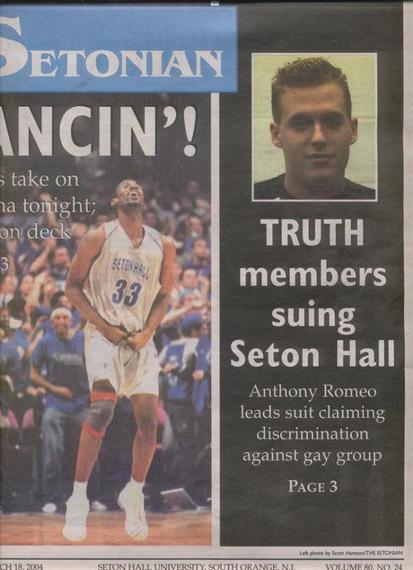 I stepped in the door at Seton Hall 13 years ago. In that tiny blink of an eye, the world has evolved, and moved forward. The swell in support for marriage equality at a national level is undeniable. And its support amongst Catholics has never been higher. We are winning these battles one at a time, in the hearts and minds of friends and family, by being authentic and honest about who we are, and who we love.

While Catholics everywhere are embracing a more tolerant and, imagine this, a more loving attitude towards GLBT persons, Seton Hall refuses to do so. So it should surprise no one that Reverend Warren Hall alleges that he was fired for posting a message of solidarity with the GLBT student community. Seton Hall can dress it up in any way they'd like, but it's hard not to feel that at Seton Hall, you can only support certain students, and the gay ones don't count.

So it was announced that Derrick Gordon is transferring to Seton Hall. It's a basketball decision, he has said. And I think it's incredible, that kids who come to watch Seton Hall basketball games can see an openly gay player and feel like they might have a place in this world, after all. That the person they love doesn't define who they are as people, that the only criteria for playing a sport is how well you perform in that sport, that love trumps anything else. That hard work makes dreams come true. 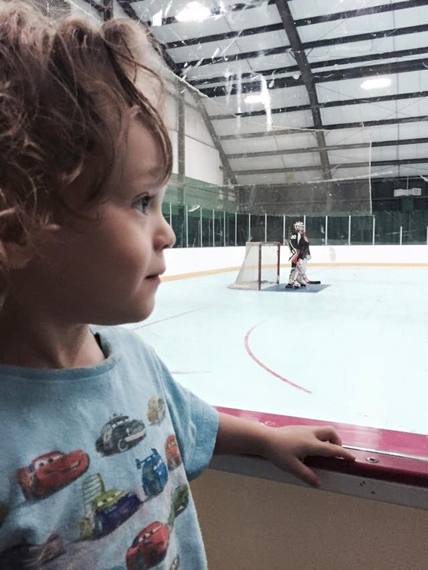 Organizations like Seton Hall, should they continue to live in an archaic time where it is okay to pretend that the world doesn't look the way it does, that the people in it are less human than others, and that some are less deserving of equality than others, will waste away into the annals of time, unmoved by popular opinion or bad press, standing firmly and proudly, flag planted with pride on the wrong side of history.

And that's how love wins. 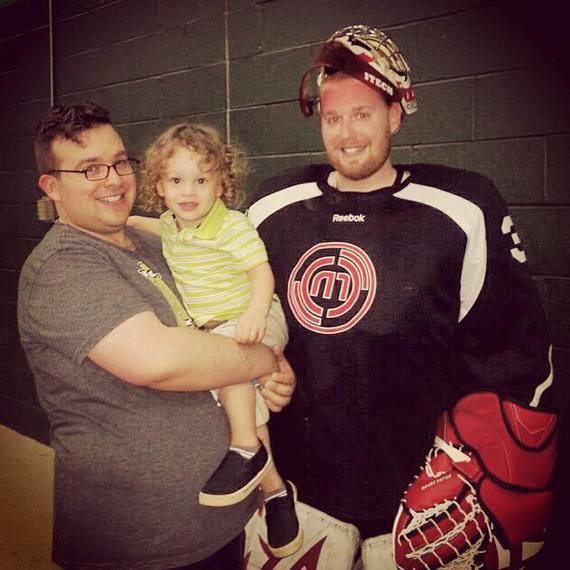 A Nice Day For A White House Wedding