Jenica Bergere had a film she was aching to make about her mother suffering from dementia and her absentee sister who had no interest in helping out. She knew it would be a comedy. But at the time, the actress (Shameless, Bosch) was 9 months pregnant, the sole caretaker for her deteriorating mother, had never directed a film before and had a $10,000 budget (considered paltry even for indie films). So what did she do?

Jenica Bergere, with the help of excellent producers, made her film.

Not only did she write, direct and star in Come Simi, she even talked her real-life OB-GYN into allowing her to use the delivery room for 15 minutes for free so she could shoot her giving birth for the movie just moments after actually giving birth. "Some friends said I should shoot with a pillow under my shirt and just 'act.' But when I'm pregnant I am my most creative, fertile and brave," says Bergere. "As a new filmmaker I wanted to make a bold move and explore the idea of filming the movie while I was pregnant. It gave my character a literal ticking clock. In the character's mind she had to reunite and fix her family's history before giving birth."

Bergere credits her producers Mary Vernieu, Keith Kjarval, James Portolese and "a big fat epidural" for giving her the perfect tools. "I was the luckiest director in Hollywood that month," Bergere says. With the help of Vernieu, one of Hollywood's most coveted casting directors, actors were cast and included Molly Shannon, Tawny Kitaen, Fionnula Flanagan, Retta, Joshua Funk, Karen Landry and Paige Morrow Kimball. "There were scheduling conflicts, ultrasounds, births and deaths that needed to be orchestrated but everyone brought their expertise to the table," says Bergere.

This quirky road trip comedy begins on a beautiful fall morning in Los Angeles with Jenica (Jenica Bergere) who is nine months pregnant and terrified of motherhood. Jenica's Aunt Maxine (Fionnula Flanagan), intent on reuniting with her dying sister, asks Jenica to bring her mother Helene (Karen Landry) to Maxine's Simi Valley home before Helene dies. And as hard as it is to navigate everything, especially when she's on the cusp of giving birth, Jenica feels compelled to do so. "It's about an estranged family of slightly crazy women," Bergere says. "The road takes you through the cycle of life on a heartfelt journey."

Come Simi continues to win awards at film festivals and will be available via The Orchard which is releasing the film on iTunes, Amazon and on demand on November 10. "I am a filmmaker who loves to tell personal stories through film. My joy is seeing life as art, or rather sharing my humorous take on life through the art of filmmaking," explains Bergere. In fact, six months and four days after principal photography finished, Bergere's mother died as her new daughter celebrated her 6-month birthday."Our little film, Come Simi, which we made for $10,000 in 10 days was storytelling in its most guerrilla form, but choreographed and cathartic fun!" she says.

Bergere told us more. Click to this Parade.com story to read the entire interview.

Learn more information about Come Simi at www.comesimi.com and watch the trailer below. 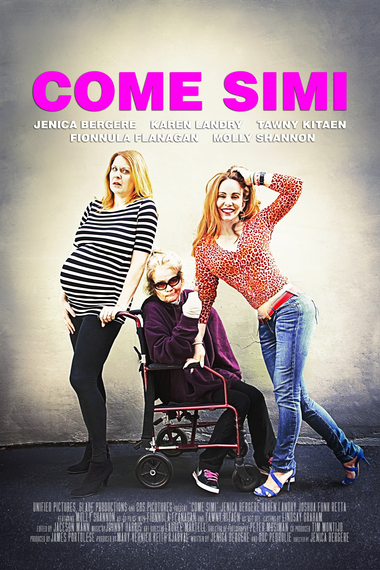