Shia LaBeouf is "not famous anymore," but he was once. Recently, he's been especially not famous for meta-plagiarism, skywriting and head-butting. But if a lot of this recent behavior seems offensive and erratic, maybe you just don't understand performance art.

As commenter Lili once said on Yahoo! Answers: "Being inspired by someone else's idea to produce something new and different IS creative work." Now, in defense of artistic freedom and copying everyone, we present you with this definitive guide to the elaborately creative decline of the man we once fondly knew as Louis Stevens.

1999 - 2003 - Young Shia is cast as Louis in "Even Stevens," a show about the misadventures of the Stevens family, which mostly involves Louis poking Christy Carlson Romano (Ren Stevens) and just so happens to include a song about lying performance art.

2007 - "Disturbia" director D.J. Caruso looks into Shia's eyes, "[sees] an old soul" who has "the potential to be the next Tom Hanks" and casts him as an angst-ridden young teenager named Kale, whose romantic intuition is mostly limited to smelling hair.

2007 - 2011 - The next Tom Hanks stars in the "Transformers" trilogy and hooks up with Megan Fox, despite her being in a serious relationship with eventual husband Brian Austin Green. Shia later explains the affair to Details: "'I don't know, man. I don't know. I don't know. I don't know ... '" -- repeating the phrase exactly 12 times with various intonations, as if trying to get it just right.

Nov. 4, 2007 - Shia is arrested when he refuses to leave a Walgreens while intoxicated.

July 27, 2008 - After he "kept doing shots of whiskey," Shia finds himself in a major car accident, crushing his hand in the process. He is almost immediately placed under arrest for a DUI, even though he really doesn't think anything was his fault. As he later tells GQ:

"I'm so angry. Because this accident was not caused by me. I got hit. I had a green. This f--ker ran a red light. And he flipped my truck, and he shoveled it on my hand. And my fingers are in the street… they're off, they're under the truck door, man. This is fake, dude," he says, lifting his newly reconstructed hand. "This is hip bone and the skin that was left over…"

Aug. 2011 - Shia trashes essentially all of his previous work except "Even Stevens," telling the Los Angeles Times that his work with Steven Spielberg is "sort of all in the same vein" and that he "doesn't want to be there forever."

Oct. 18, 2011 - While shooting "The Company You Keep," Shia gets into a bar brawl in Vancouver during which he is pummeled by a "shirtless, hairy-bellied" man, as you can watch in TMZ's video of the incident here.

April 20, 2012 - Announcing himself as a comic book artist at the Chicago Comic and Entertainment Expo, Shia compares comic book art to "singing in the shower."

Dec. 17, 2013 - Shia apologizes by plagiarizing a series of apologies, including the aforementioned random person on Yahoo! Answers.

Copying isn't particularly creative work. Being inspired by someone else's idea to produce something new and different IS creative work.

Jan. 2, 2014 - Shia apologizes by hiring a skywriter in Los Angeles, despite the fact that Clowes resides in the Bay Area.

Jan. 8, 2014 - Shia receives a cease and desist letter from Daniel Clowes' lawyer and responds by tweeting the entire thing and then making it his header photo. 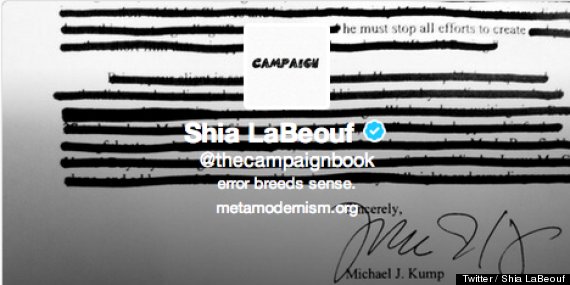 In light of the recent attacks against my artistic integrity, I am retiring from all public life.

Jan. 17, 2014 - Shia makes himself much more famous, by head-butting a stranger at a South London pub.

Jun. 26, 2014 - After allegedly peeing on a wall outside a New York restaurant, chasing a man through Times Square for a hat and wearing a deliberately battered t-shirt, Shia is kicked out of "Cabaret" and arrested in a struggle that required cops to muzzle him.