On the sidewalks of the Lower East Side in New York City where I live, people write graffiti into the concrete. As I walk around with my dog Sage, I take notes of their location to come back later to make rubbings of them, my dog Sage, by my side. Sage is a great assistant, offering unconditional support -- plus, she watches my back as I work on the sidewalk. As the repetitive gesture of applying ink on a piece of paper enhances the texture of the concrete carved with graffiti, it gives the image a tactile visuality. It's this emphasis on contact that gives emotional resonance to my work.

I started to collect these sidewalk imprints for their weird beauty in 2009. Before that I had done some rubbings of graffiti carved on picnic tables way up in the mountain above the Buddhist Monastery in Woodstock where David, my husband, and I like to hike. 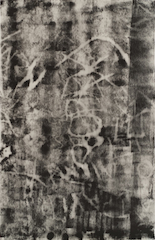 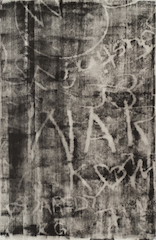 On the West Coast recently, to install my art show at PØST, a cool experimental exhibition space Downtown L.A., I noticed, around Little Tokyo, that the birch tree trunks were covered with thin graffiti. Next time, I'll try to make rubbings of these.

In Brittany, one summer, I made a "frottage" with graphite of a 5,000-years-old graffiti carved on a Menhir standing tall in a field of a neolithic symbol whose meaning is long gone.

In Paris in the 1930s, Brassaî photographed the graffiti carved on the old crumbling walls of the city, finding in this primordial instinct to leave a mark, not so much the impulse to destroy but the same drive that has motivated others to build pyramids and cathedrals. Brassaî wrote:

What one perceives under the transparency of spontaneity is a living force as driven and irrational as breathing or sleeping. Whatever the criteria is in figuring out what is art and what is boloni, only the spontaneous manifestation of the creative impulse brings out authenticity. In the end, it's what matters most. Beauty is not the object of creativity, it's its reward. Even though it's not easy to perceive this manifestation of beauty, it is a sign that art has the power to restore the lost equilibrium in between man and nature.

If there is another writer who digs graffiti, way back, for me, it's Victor Hugo in "The Last Days on Death Row." In his plea against death penalty, Victor Hugo relates the last night of a prisoner reading by candle light the ultimate messages carved by others on the walls of his cell. Perhaps Victor Hugo used his imagination but we know that Brassaî started to document graffiti in the 1930s, skulls, faces screaming the horror of World War I, and went on after the Second World War fascinated by a simplicity in which he saw the expression of modernity. Artists like Jean Dubuffet and Antoni Tapies, post-World War II, were into his work as they were looking for a new imagery. 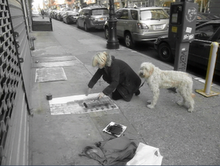 As an historical document, the imprints I collect reflect our contemporary collective unconscious. At times, the caligraphy is exquisite like in the name "Sarah" found on 6th St. Lots of names, love messages with the classic heart with an arrow going through it. A spiked helmet, cartoony drawings, funny faces, weird elf, some haiku in the simple words "Little girl," a few dates. The word "WAR" in big letters. Some history: "Free South Africa." Yin-yang, peace, feminist, anarchy symbols, the classic tattoo image of a blue bird, all these symbols reflect our neighborhood culture. One "Evil" on Avenue A. I haven't found any graffiti yet that speaks of the city traumatic history on 9/11. But again who knows? Could it be a name etched in the sidewalk?

On 9/11, I was at home that morning with David and our 4 year-old daughter. I was pregnant with our second child, organizing my art files as a plane crashed into the World Trade Center. I had in my hands a newspaper illustration of the 1883 historical event of the panic on the Brooklyn Bridge. We turned the TV on and off quickly. I went out. As I approached Broadway, seeing all these people covered with dust walking north in silence made me feel closer emotionally to what my family had experienced during the bombings by the American forces in World War II in Paris. As I came back home, the ominous illustration of the panic was laying around. I enlarged and cropped the wood engraving and made some gouache drawings of these markings. Months later, I sent a giant photocopy of the pattern to Kashmir where a group of villagers stitched the pattern in blue and white wool on cotton canvas. I transformed an illustration into a temporal experience. The image is so diffuse that the viewer's eye slows down trying to reconcile the eye's momentary apprehension of the depiction and the mind's recognition of the subject. To complement this research, I read the work of the early crowd theorist Le Bon and "Crowd and power" by Canetti. In The accident of art, Paul Virilio, in conversation with Sylvère Lotringer says, "In my view, this is positive. The accident reveals something important we would not otherwise know how to perceive." I guess this is how I got into the Buddhist notion of interconnectivity. 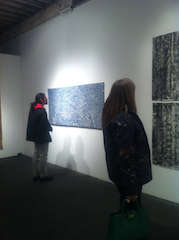 There are two large embroideries of the crowd series in my show at PØST, "Don't panic" and "Fireworks" next to six sidewalk graffiti imprints presented in the context of a larger body of work.

My gouache drawings for "Don't panic" were published in MADE magazine in an artist project commissioned by Chris Kraus, with a text on panic by Sylvère Lotringer.