MEXICO CITY - On Thursday afternoon, thousands gathered around the Angel of Independence on the main avenue of Mexico City to protest the disappearance of 43 students from a teacher's college in Ayotzinapa, Guerrero. Some protestors carried signs demanding the resignation of President Enrique Peña Nieto. Others distributed posters bearing the names and faces of each of the missing 43. Beginning their march toward the Zocalo, they chanted through bullhorns and loudspeakers: Ayotzi vive, la lucha sigue--Ayotzinapa lives, the fight continues. 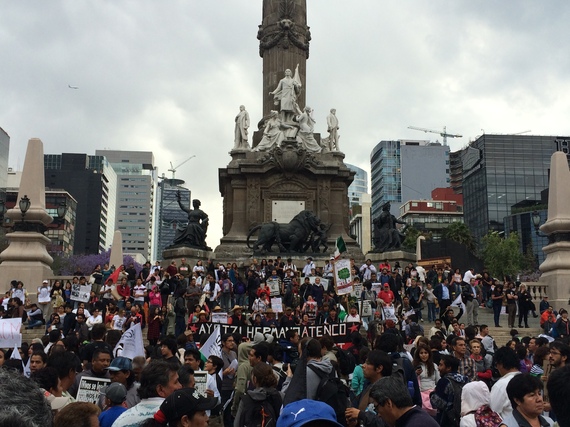 But that fight is changing rapidly.

From the early protests back in November--when hundreds of thousands of people worldwide took to the streets to demand justice for the victims of Mexico's drug war--much of the idealism has faded. 42 of the 43 students remain missing, irregularities in the investigation remain, and the possibility of ousting Peña Nieto--one of the central demands of the protest movement--seems a distant dream. International outrage has slowed; even Mexico City's own Reforma newspaper pushed the story of Thursday's protest to Page 6.

While the crisis following Ayotzinapa appeared ripe for radical change, much of the conversation in Mexico has turned toward the pragmatic:

How should Mexico approach the midterm elections in June? How can Mexican voters send the loudest message? How can Mexico drain its politics of Narco influence?

Back at the Mexico City protest, a number of protestors called for a boycott of the upcoming elections. "The political parties are not listening," blared the loudspeaker on top of a truck representing the Frente Popular Francisco Villa Independiente--a local housing rights organization--as it snaked down Avenida Reforma. "Cancel your votes. Do not support the corrupt politicians."

The families of the Ayotzinapa victims, for their part, have submitted a formal letter to the National Electoral Institute demanding that the suspension of elections in Guerrero. Drug cartels have infiltrated Guerrero politics too deeply to hold legitimate elections, they hold. They propose devolving municipal power down to local town councils, appointing people of "high moral standards" to direct them. As one sign at Thursday's march read, "Peña Nieto: Guerrero demands justice, not elections."

The conversation around the upcoming elections has highlighted a much broader political crisis in Mexico. To many voters, the PRI, the PAN, and the PRD--Mexico's three largest political parties--all appear equally tainted by the drug war. Even Andres Manuel Lopez Obrador, one of Mexico's leading voices on the left and head of the new National Regeneration Movement, has been uncomfortably quiet, implicated in the rise of the Iguala mayor that is responsible for the disappearance of the 43 students. In the wake of Ayotzinapa, no major political voice has emerged to represent the citizens that are crying out for change.

Moving toward June, then, it is entirely unclear if that change will come. The PRI, despite a near-record low approval rate of President Peña Nieto, still leads in the polls. The PRD may take a small hit in the elections, but overall, the June elections are set to reflect little of the mass, nationwide unrest provoked by the disappearance of the Ayotzinapa students six months ago.

Many Mexican voters feel caught in a quandary. "Until we see the 43, we should not vote," says Laura Romero Juárez, a representative of the Front of Social Organizations in Defense of Azcapotzalco. "In picking the best of bad options, we still lose. They will still betray you." Others claim that, in boycotting the elections, voters only give way to the worst of bad options. It is the lack of electoral pushback, they argue, that is driving the PRI's projected success in June.

Six months after Ayotzinapa, the haze of protest fever has cleared, and the long, difficult road to change has come into focus. The pragmatic questions Mexico must ask itself in order to arrive there are ugly. But--short of a revolution--this strategic approach is the only way for Mexico to generate change from below, giving voice at last to the many victims of its ongoing violence.