There's an eerie glow that fills the sky but is visible only to X-ray detectors, and now, scientists have discovered the sources of it.

About 60 percent of the mysterious glow, called the "diffuse X-ray background," comes from X-ray-emitting hot gas located within a large cavity of space that extends out more than 300 light-years from the sun, new research shows. The rest of the glow comes from phenomena within the solar system.

The finding may help scientists better understand the local environment around the sun, researchers say.

Scientists discovered the diffuse X-ray background more than 50 years ago. They later determined that the high-energy X-rays with energies higher than 1 kiloelectronvolt (keV) come from the active cores of other galaxies, but the origin of the low-energy X-rays (0.25 keV) has long been debated. [Strange & Shining: Photos of Mysterious Night Lights]

Initially, astronomers thought the low-energy X-rays in the sky must originate outside the solar system, from a very hot cavity of gas dubbed the "local hot bubble," which likely formed from a supernova explosion that occurred 10 million to 20 million years ago. But in the late 1990s, researchers discovered a phenomenon called the solar-wind charge exchange, which produces 0.25 keV X-rays within the solar system.

Many scientists believed this new X-ray source could explain all of the diffuse X-ray background, thus casting doubt on whether the local hot bubble really exists. "Whether the sun is surrounded by a big bubble or not makes a big difference for our understanding of the structure of the local region of our galaxy," said Massimiliano Galeazzi, a physicist at the University of Miami and lead author of the new study, published yesterday (July 27) in the journal Nature.

Galeazzi and his colleagues set out to see if the sky's low-energy X-rays came from sources inside or outside of the solar system. "Basically, what we needed to find was a way to identify one source from the other," Galeazzi told Live Science. "What is something that is particular to the solar-wind charge exchange to separate it from the local bubble emission?" 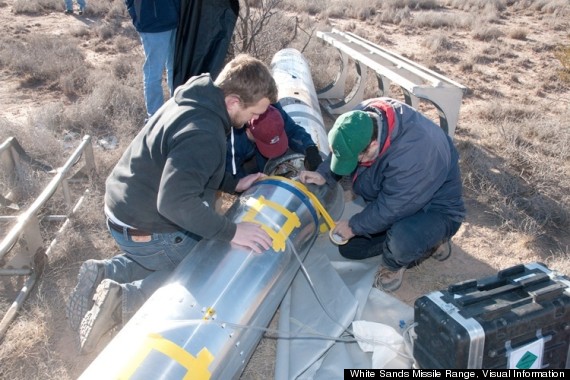 To analyze a mysterious X-ray glow in the sky, researchers modified a detector used in the 1970s. Here the researchers recover the detector, after it was launched into the Earth's atmosphere for five minutes.

As the sun moves through the galaxy, hydrogen and helium atoms from the interstellar medium — the region of space between star systems — enter the solar system. The helium atoms form a kind of high-density tail, or trailing cone behind the sun, from the movement. This results in a correspondingly higher X-ray production from the solar wind. During December, Earth is downstream of this tail; by analyzing the X-ray production of the cone, scientists can determine how much the solar-wind charge exchange contributes to the overall diffuse X-ray background that's recorded by an all-sky survey of X-rays.

To analyze the signature of the tail, Galeazzi needed a special X-ray detector not used in traditional satellites. He and his colleagues refurbished and modernized a detector last used in the 1970s to map the soft X-ray sky, and used a rocket to launch it into Earth's atmosphere for 5 minutes.

They compared their data with old readings from the now-defunct ROSAT satellite, which produced an all-sky map of 0.25 keV X-rays in the 1990s. They found that the solar-wind charge exchange contributed about 40 percent of the X-rays in the ROSAT survey.

"The rest must come from the local bubble," Galeazzi said. "What is important is that we now know that within the galaxy, these bubbles exist, and they contribute to the structure of our local region in the galaxy."