The grueling trip to the Western Sahara refugee camp of Dakhla begins in the Algerian military airport of Tindouf, located deep in the Sahara Desert in south-western Algeria. One of the first questions I faced upon my arrival to the Tindouf airport was given that I'm a Moroccan, what was I doing here? In the middle of one of Algeria's major military airports, and just several kilometers away from the stronghold of the Polisario Front, it seemed to many that I was standing on the wrong side of the borders. This was a recurring question that I faced throughout my visit in the Western Saharan refugee camp of Dakhla.

After multiple extensive passport checks at the airport, the trip entails a 160-kilometer drive to the most isolated of the four main Sahrawi refugee camps outside of Tindouf. The ride to the camps unfolds in a long winding road, with occasional signposts indicating the distance from Tindouf. The only thing that disrupted the 6-hour drive to Dakhla were the several military checkpoints manned by armed soldiers -- Algerian soldiers in the first checkpoint, then Polisario soldiers in the ones that followed. 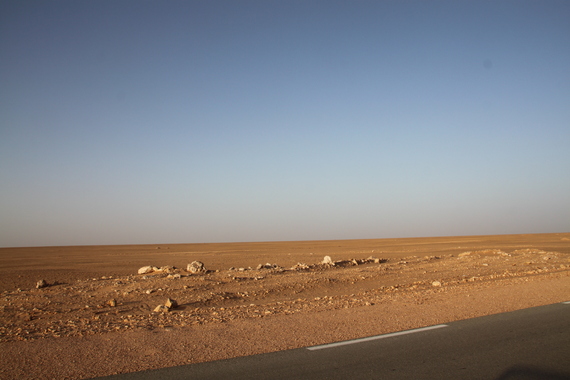 The road from Tindouf to Dakhla. Image by author.

Unlike other refugee camps in the region, the Sahrawi refugee camps in southern Algeria are entirely governed and administered by a government in refuge. In 1976, the Polisario Front liberation movement established the Sahrawi Arab Democratic Republic (SADR) after thousands of Sahrawis were displaced from their land following a joint Mauritanian-Moroccan invasion in 1975. While Mauritania soon withdrew from the territory, Morocco continued to fight the Polisario Front up until 1991, when the United Nations brokered a ceasefire. Up until today, however, Morocco remains present within the territory. As a result, the refugee population in the camps has steadily grown over the years as Sahrawis living in the areas controlled by Morocco flee due to a deteriorating human rights situation.

As of mid-2013, according to the UNCHR's regional operations profile of North Africa, around 116,476 Sahrawi refugees reside in the camps. The four main camps are divided into wilayat (states) and named after cities that Sahrawis left behind in the Western Sahara: Laayoune, Smara, Auserd and Dakhla. February 27 and Rabouni, two minor camps primarily host boarding schools and the SADR's administrative offices. The camps share dire living conditions in the harsh desert climate, and where resources are scarcely limited. In the month of May, for example, temperatures already begin averaging around 37 degrees Celsius. 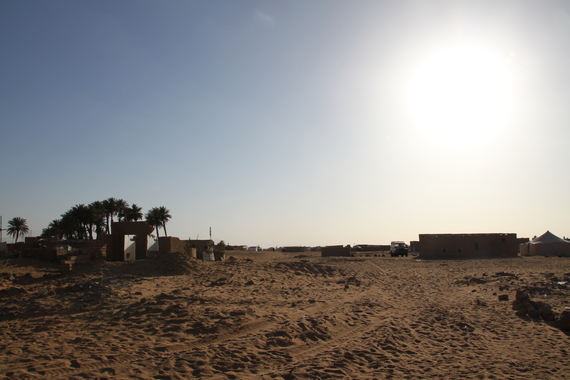 The scorching midday sun in the middle of the Dakhla refugee camp. Image by author.

With the support of the Algerian government and various humanitarian aid organizations, the SADR government functions as a "government in exile." Even though the refugee camps fully exist within Algerian borders, the SADR government is fully responsible for the provision of aid, basic educational and medical services, as well as ensuring security in the camps. Unlike common misconceptions about mobility within the camps, a point that proponents of the Moroccan side argue, Sahrawis are given identity cards which allow them to leave the camps at their will. The border with Mauritania, for example, is open and Sahrawis are able to pass through it without more than their identity cards. 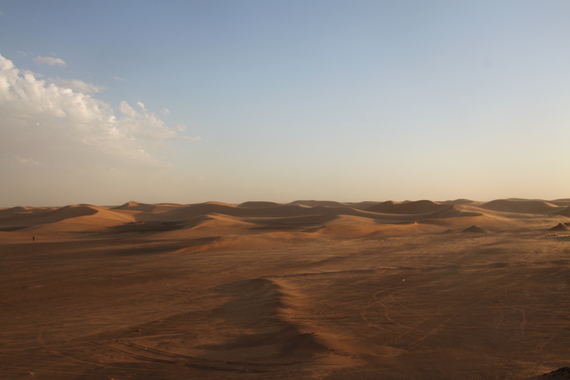 Sand dunes stretch as the border with Mauritania lies just a few kilometers ahead. Image by author. 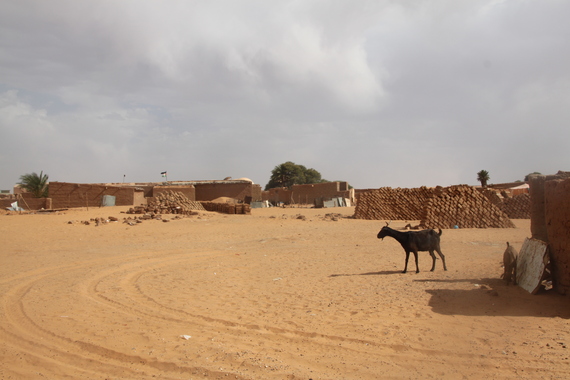 Livestock amidst homes in the Dakhla refugee camp. Image by author.

In addition to providing basic services and ensuring security within the camps, the SADR government has undertaken major efforts with regard to the preservation and cultivation of Sahrawi culture and identity. Khadija Hamdi is the Minister of Culture and wife of the SADR president, Mohamed Abdelaziz. She spoke to me about the significance of her ministry in maintaining Sahrawi identity and culture -- something that becomes even more delicate for a population in refuge for over 40 years.

Stressing the importance of this role as the government of a population in refuge, Hamdi discussed initiatives such as the "Tell Me, Grandfather" project, which seeks to record oral histories from the older generations. "If a man dies, a library is burnt," says Hamdi. The Ministry of Culture also assists in the organization of the eleventh annual FiSahara International Film Festival, which showcases a series of foreign and Sahrawi films, as well as providing filmmaking workshops for Sahrawi youth. 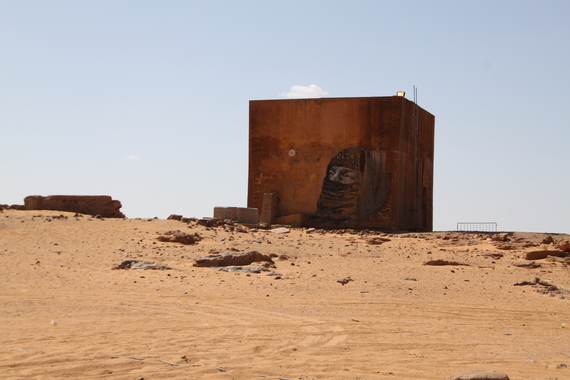 Graffiti in the Dakhla refugee camp. Image by author.

As one of four female members in the SADR government, Hamdi also emphasized the role of Sahrawi women in the refugee camps. "Every woman has her own story," explains Hamdi. With women heading the ministries of culture, education, professional training and employment, the SADR government has been hailed as one of the most gender inclusive in the region.

"We have worked to eliminate the culture of domestic violence against women and preserving the value of the Sahrawi woman," says Hamdi in her capacity as a minister of culture and wife of SADR president, Mohamed Abdelaziz. The women's branch of the Polisario Front, the National Organization of Sahrawi Women (known by its Spanish acronym, UNMS) also plays a major role in addressing the needs of women, through meetings, seminars, conferences and cultural events. 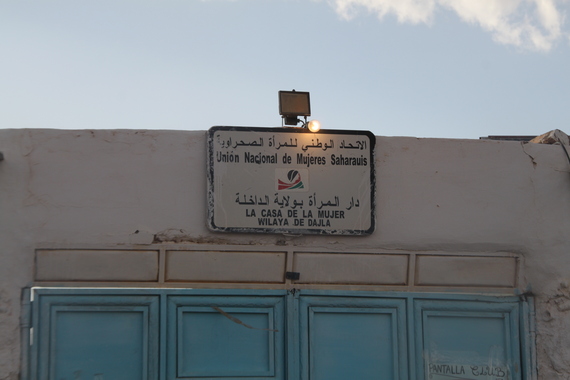 The headquarters of the National Organization of Sahrawi Women in the Dakhla refugee camp. Image by author. 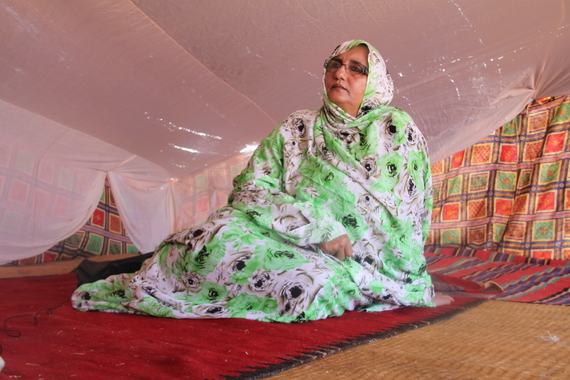 In addition to her role in the Ministry of Culture, Hamdi is viewed as a significant figure in the day-to-day functioning and administration of the camps. This was clearly evident in the way she snapped orders to those around her with little to no resistance -- something that was uncommon with the way other ministers in the SADR government acted. Some in the camps even alleged that it is Hamdi who is in fact the primary leader of the SADR government, not her husband Mohamed Abdelaziz. This resonates with the ways in which Sahrawi women are recognized as holding important roles in Sahrawi society, not just in the government. While men were fighting in the war against Morocco up until the 1991 ceasefire between Morocco and the Polisario Front, Sahrawi women were vital in upholding the day-to-day administration of the refugee camps. Sahrawi women are also widely recognized for establishing the foundations of the camps as they fled the invasion of Moroccan forces in 1975. Moreover, as a matrilineal society, Sahrawi households are referred to by the woman head of household, instead of the male.

Between Occupation and Refuge

While SADR functions as a government in exile and is charged with governing the Sahrawi refugee population, a vast majority of Sahrawis remain living in the land controlled by Morocco. In 1996, to better cater to the Sahrawis living in the occupied territory, the SADR government created a ministerial position headed by Mohamed Louali Hocene, known as the Ministry of the Occupied Territories.

Hocene spoke to me about his role as Minister of the Occupied Territories and the ways in which the ministry bridges the gap between Sahrawi populations living under occupation and in refuge. Speaking about the political initiatives to include Sahrawis living under occupation within the decision-making processes of the SADR government Hocene elaborated that 12 representatives from the occupied territories are chosen by members of the SADR government.

"These representatives," Hocene explained, "remain anonymous to the Sahrawi population to protect them from the oppression of the Moroccan authorities." "These representatives assist in communicating policies and news from SADR to Sahrawis in the occupied territories and participating in political activism."

"The creation of the ministry coincided with a general policy shift within SADR from focusing on the war with Morocco to the referendum," clarified Hocene on the late establishment of the ministry years after SADR was created. The referendum meant to determine the legal fate of the Western Saharan territories and its inhabitants has yet to take place. Discussing some of the struggles the ministry faces, Hocene says the growing number of Sahrawi victims to Moroccan repression in the occupied territories since 2005 has seen a gradual increase.

This increasing repression has been a source of ongoing displacement, as many young Sahrawis flee the Moroccan-controlled territory and seek refuge in the camps. One Sahrawi, Ahmed al-Hassani, spoke to me about how he has been living in the camps for nearly 3 years now. Following the violent dismantling of the Gdeim Izik protest camp, al-Hassani explained how many Sahrawis living under Moroccan control were seen as suspects. Him and his friends were rounded up by Moroccan authorities, endured torture, and faced accusations of being spies. Al-Hassani fled to the Dakhla refugee camp in 2011, where he has lived away from his family since. 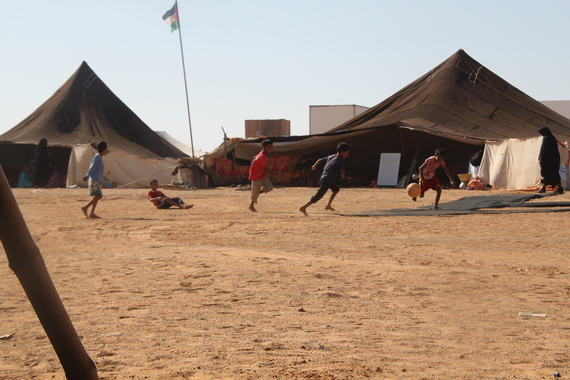 The case of al-Hassani is not uncommon and many younger Sahrawis are expressing a growing disenchantment with their living conditions and the uncertainty of their future. Another Sahrawi refugee asserted that even if Sahrawis gain independence, a civil war is inevitable, as the current leadership is increasingly contested. Responding to why these criticisms are not commonly shared or outwardly expressed, one refugee told me, "For now, it's not the time to be divided. Our self-determination is our priority."