Originating in Canada, the SlutWalk movement began as a response to a statement by a representative from the Toronto Police Department; a statement which demonstrated the prevailing rape culture mentality in modern society. When the police representative made a public statement blaming sexual assault on the way women dress, five women decided to fight back.

FIU's chapter of the National Organization of Women decided that Miami needed its own SlutWalk. Unlike the founders of the movement who also believe in reclaiming the word slut in order to strip it of its power, Gabriella Bonilla, president of FIU's NOW chapter, stated that she thinks the word should not be used at all.

Whether that sentiment was shared by everyone doesn't matter, because the protestors were in agreement that there is no excuse for sexual assault. "No means no" was the general sentiment being relayed, as protestors took up protest signs and chanted in unison.

The crowd consisted of people from all age groups, ethnicities, and races. Men were also out in abundance, declaring that "real men don't rape."

The march made its way around the perimeter of the school's south campus, NOW officers leading the group, using megaphones to get their message across. It's unlikely that they've eradicated the term slut from Miami's consciousness, but they certainly did make a statement.

Get more from Miami New Times. 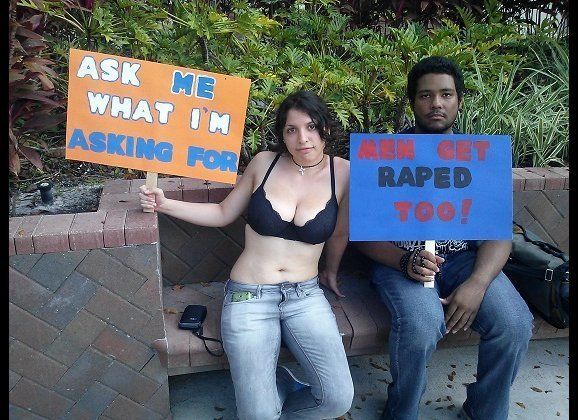