It’s still amazing to us that humankind ever found a way to fly. But it especially blows our minds to think about people flying out to Hawaii -- the most geographically-isolated landmass in the world -- in the early 1900s.

While the Wright Brothers and Charles Lindbergh’s landmark flights are what we remember most, the most romantic period of flight belongs to Pan American Airways and its Clippers. The so-called flying boats took rich people to paradise before the bombs of World War II interrupted the dream.

A piece of this history is the subject of an exhibition at Washington, D.C.'s Smithsonian National Air and Space Museum, titled “Hawaii By Air,” on view through July 2015. It looks at how advancements in air travel worldwide changed Hawaii’s tourism, and all of Hawaii, forever.

Flights in Hawaii started in the early 1900s, around the same time as they did in South Carolina for the Wright Brothers. But it wasn’t until the ‘20s that inter-island flights really became the way to see the islands. 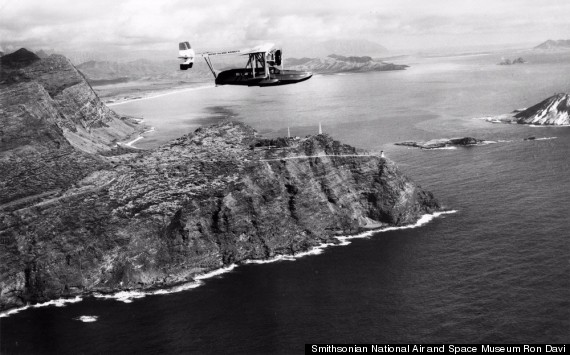 In 1920, the Inter-Island Steam Navigation Company had Hawaii's largest inter-island shipping fleet. In 1929 it launched Hawaii’s first airline, a decision that would outlast the shipping era and grow into Hawaiian Airlines. Inter-Island Airways’s first plane was a Bellanca CH-300 Pacemaker, a six-seat amphibian aircraft renowned for its endurance and used for sightseeing tours. 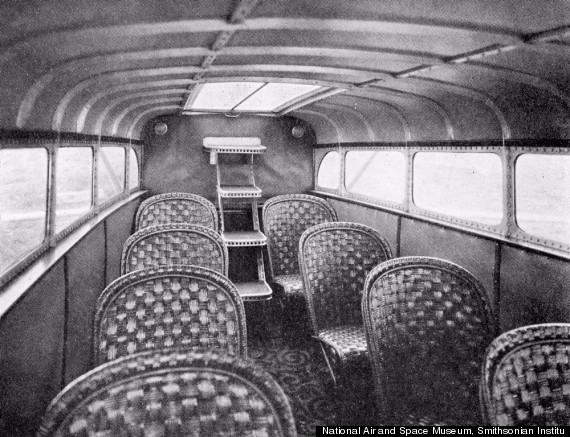 Because business was so good, the airline soon included two Sikorsky S-38 flying boats, planes with wings above the cabin that provided unobstructed panoramic views of the islands. The flying boats could sit eight or nine passengers in their wicker seats, but comfort really depended on the trade winds. On gusty days, the cabin would swing “like a pendulum,” according to the exhibit. Upon landing, passengers would climb up steps in the back and out a hatch. 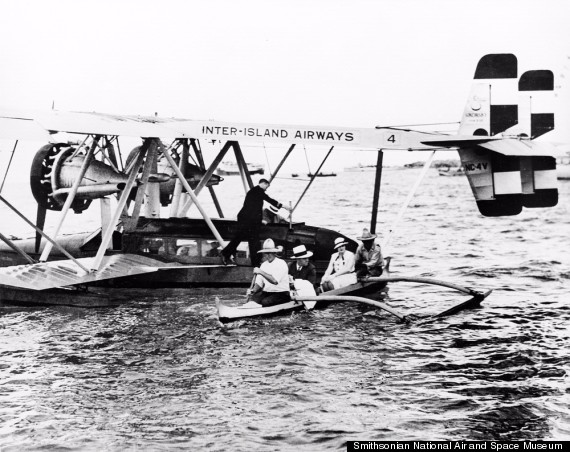 Before an airport was built in Hilo, on Hawaii Island, the plane landed on the water; its passengers had to climb out the top and into an outrigger canoe that would take them to shore.

The author Barbara Robinson wrote, “One by one the passengers wrestled themselves out of their seats, and up the ladder, and disappeared through the hatch, gentlemen first, ladies last. For reasons of modesty, my mother told me... I left my window and gripped my way down the aisle toward the tail . . . This twisting, flouncing, wind-wave motion made me think of Jonah inside the whale."

In 1935, Pan American Airways launched the first transpacific Air Mail service through Hawaii, and soon began carrying passengers on that route. But it wasn't easy to engineer. First, they had to map out the world's longest oceanic air route, build air bases and hotels on remote Pacific islands and figure out how to carry heavy cargo across such landless distances. 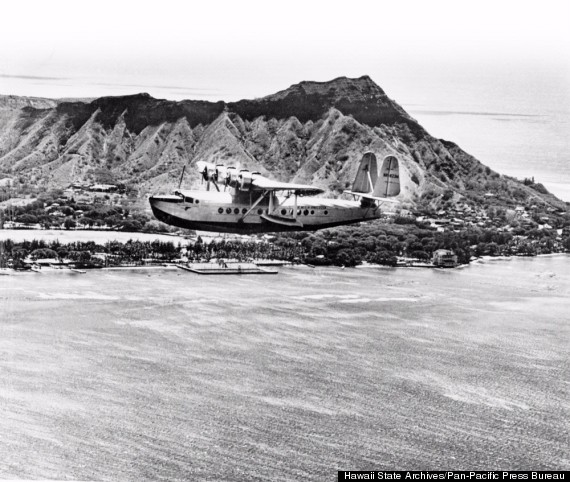 After the first survey flight to Hawaii, the Pan American Clipper passes Diamond Head as it arrives on Oahu, completing the 18.5-hour flight in 1935.

Pan Am’s China Clipper was the hulk of machinery that fulfilled tourism’s destiny in Hawaii. 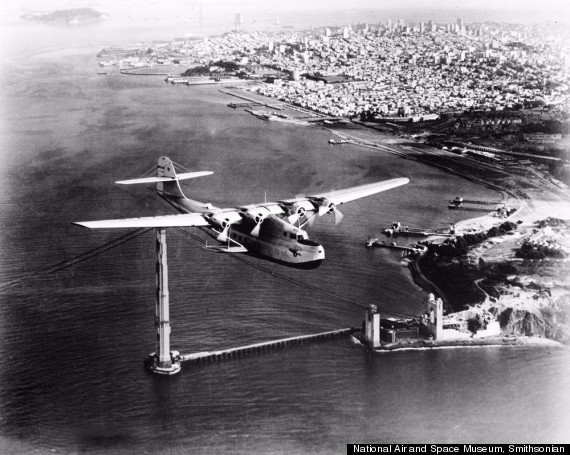 On its first flight to Hawaii, Capt. Ed Musick flew the China Clipper underneath the non-yet-finished Golden Gate Bridge in San Francisco Bay while tens of thousands watched from below and millions more listened as it happened on the radio.

Four engines gave the China Clipper a locomotive’s strength; it was fast enough to reach Hawaii in under 20 hours. The route was the only overnight stop on a route to Manila. Pan Am offered seven tickets (a one-way fare cost $14,000 in today’s money) for the first flight in 1936. Over 1,000 people applied for them. 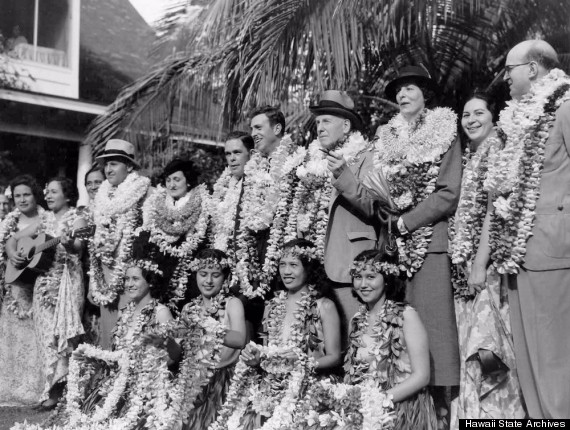 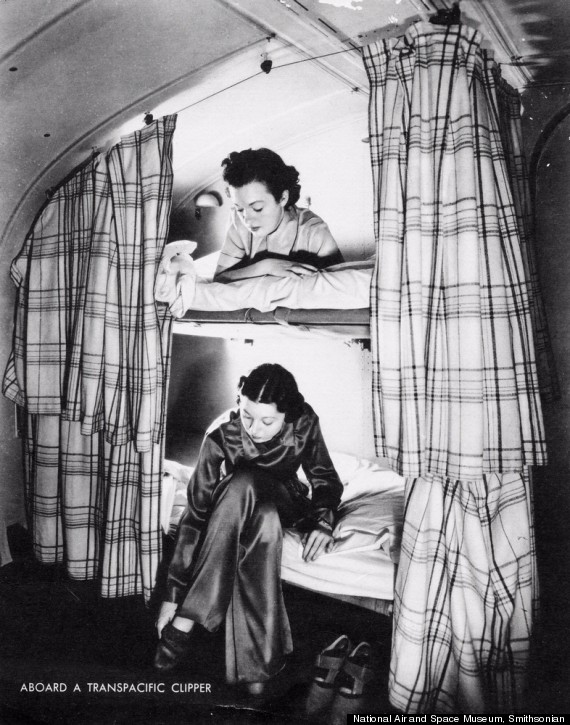 The three Clippers, named China, Hawaii and Philippine, carried mail first and foremost and never took more than eight or nine passengers for the once-a-week flight. H. R. Ekins, who wrote 1936’s Around The World In Eighteen Days And How To Do It, remembers his Clipper trip as having an interior “like that of no other airplane. Her lounge . . . would seat 16 persons comfortably, leaving plenty of space in which to walk about . . . as roomy as the Hindenburg and as steady as a rock."

In 1939, a Boeing 314 Clipper took to the skies. It was the largest airliner at the time -- with wings so big they could be serviced by crew members on interior walkways -- yet still only carried around 25 passengers. Known as “flying hotels,” these new Clippers offered an upper flight deck, lower passenger cabin, lounge that converted into a dining room, separate men’s and women’s restrooms and even a swanky De Luxe bridal suite in the back.

Yet with the bombing of Pearl Harbor in 1941, all tourism to Hawaii was stopped by the U.S. military, and so was Pan Am’s six year reign of the skies: 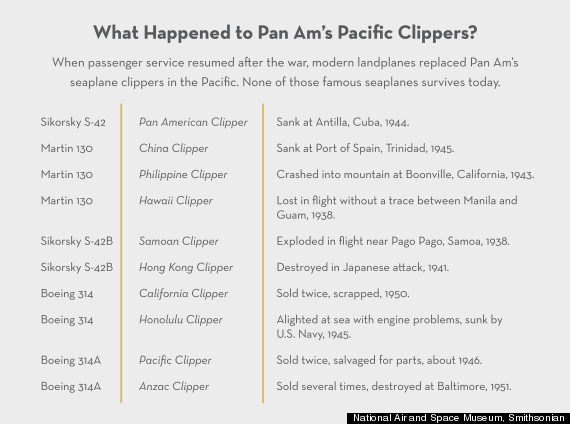 Alas, the days of the Clipper are as long-gone as the romance of flying. Fast-forward 90 years: 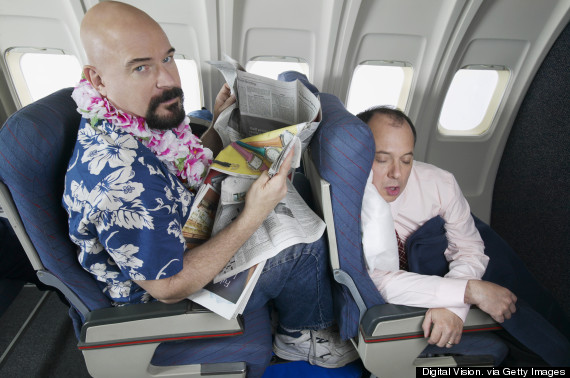