Ripped from the pages of Lewis Carroll's "Alice in Wonderland," scientists have discovered a smoking caterpillar of sorts.

While this find may not push Alice's hookah-smoking insect from its psychedelic pedestal, this caterpillar is pretty snazzy, as it can use nicotine to ward off hungry wolf spiders.

The researchers found a gene in hornworm caterpillars that allows them to puff nicotine out through their spiracles (tiny holes in their sides), from the tobacco they consume, as a warning to their would-be predators. Researchers called this tactic "defensive halitosis." [Video – See the Smoking Caterpillars in Action]

"It's really a story about how an insect that eats a plant co-opts the plant for its own defense," said study researcher Ian Baldwin, a professor at the Max Planck Institute for Chemical Ecology in Germany. 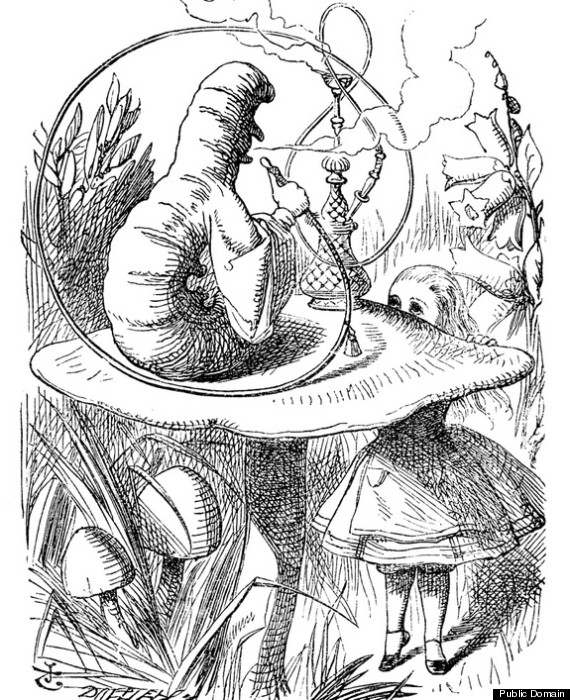 In Lewis Carroll's "Alice in Wonderland" a hookah-smoking caterpillar puffs out colorful words and boasts "a very good height," at just 3 inches tall.

But, said Baldwin, it's also an example of the importance of studying animals in a natural habitat rather than just in the lab.

"We never would have discovered the function of this gene if the spider hadn't told us," he told LiveScience.

The researchers discovered the odd halitosis when trying to find out how hornworm caterpillars could consume tobacco plants despite the toxic nicotine within the plant's tissues. In fact, these caterpillars are hundreds of times more resistant than humans who smoke are to the toxic effects of nicotine.

This RNA-interference technique might someday be used in genetically modified crops produced with specific nutritional goals in mind, as interference RNA targets a specific gene. Early trials of medications using a similar principle to treat a rare disease called transthyretin amyloidosis in humans were published earlier this year.

"A very intriguing aspect of this study is the really state-of-the-art methodology that was used to determine the fate of nicotine," said May Berenbaum, a professor and head of the department of entomology at the University of Illinois at Urbana-Champaign, who edited the study for the journal.

While the study involved wolf spiders, the nicotine halitosis does not necessarily turn away other predators. This defense, Berenbaum noted, has the advantage of warning a predator of a prey's toxicity without requiring the prey to lose a limb.

Scientists may also want to determine whether hornworm caterpillars have other defenses against predators. For instance, the caterpillars also consume plants, such as tomatoes, which contain alkaloids that are not volatile like nicotine is. If a compound is not volatile, it isn't easily vaporized and so couldn't be emitted from tiny pores.

The study is being published today (Dec. 30) in the Proceedings of the National Academy of Sciences.