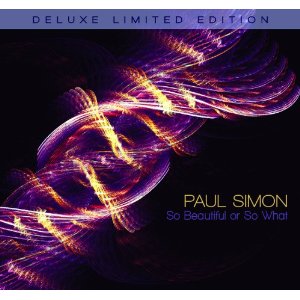 A Conversation with Paul Simon

Mike Ragogna: Paul, how are you doing?

MR: Paul, you've recorded this new album with Phil Ramone, which makes it a reunion of sorts. What motivated you guys to get back together again?

PS: Just a casual meeting or running into each other. I told him I was just starting to work on the album, and he said he'd love to work with me again, so I said I'd love to work with him again too. We're sort of neighbors up here in Connecticut. He lives one town away and I record in a small home studio, so it made it very easy to do it.

MR: What was the experience like in the studio?

PS: Well, it's very comfortable. The studio is just a little house that is right near my house. You're at home, so you're totally comfortable.

MR: When you were writing the songs for this album, did you have a theme in mind, or was it just time to make a new album?

PS: No, no theme. Neither do I think it's time to make a new album. When I have the urge to write, and I can write something, then I know I'm beginning again. I don't know where it's going to end, if it's going to be an album or something, but it doesn't really matter. The fact that I'm writing again is always a big relief and a pleasure to me, even though it starts off very slowly. But then it picks up speed, and I like recording very much. I really enjoy recording as much as writing, maybe more. So, I'm happy to put it in the form of an album. Of course, I could do it in some other form too, like a movie or a musical or something, but I really do like making records.

MR: Paul, to me, your records are always superb. Personally, this record is my favorite since Graceland.

MR: And one of my favorite tracks is "Getting Ready For Christmas Day" on which you feature the Reverend J.M. Gates with all of his fire and brimstone. What motivated you to merge his sermon with your song? And the song's title was inspired by one of his sermons, right?

PS: The title, absolutely, comes from his sermon, which is called "Getting Ready For Christmas Day." I heard his sermon on this box set that was issued called Goodbye Babylon from a label called Dust To Digital. It must have come out four years ago or something like that, and it's a really fabulous box set. It's Americana music from the '20s up through the '50s.

One of the disks was just sermons, and I really liked this particular sermon, the way he delivered it. I didn't think I was going to do anything with it, but at a certain point towards the middle of the album, I went to the studio to cut a rhythm track, and we cut "Getting Ready For Christmas Day." I said, "You know...put that sermon on top of that track, and let's see what that sounds like." It sounded really great and really arresting. I thought that would be such an interesting record. I didn't know how to do it, but I thought it would be interesting.

Then I said, "Let's take thirty-two bars of this sermon, separate it, then leave a space for me." Eventually, I saw what it was, and discovered that I had to write a song that contains the sermon, and then duets with the sermon at the conclusion. I had to write a lyric that was compatible with that sermon, but that sermon was from '41, we're talking about a long time ago. So, that's what I was trying to do, and it was a lot of fun to work on the puzzle and figure out how to get it.

MR: What's nice is that there was a musicality to his voice.

PS: Yeah, there was. He was almost in key, yeah.

MR: I don't know what you guys had to do to it to make it fit, but the way you adjusted it was perfect, beautiful.

PS: We didn't really do much as far as altering his voice or anything, but the spacing did have to be modified.

MR: Because of Gates' approach, it seems like that sermon also could have been titled, "Getting Ready For Judgment Day."

MR: (laughs) I also loved "The Afterlife," how you've got to get in line and wait your turn. Also how even in the afterlife, and even the enlightened had to go through a process.

PS: My thought was, if and when you're confronted with the enormity of God, infinity, or the great mystery--however you want to describe it--all the questions that we prepare in our feeble human brains don't really have much meaning. So, you can't say, "Was I right to do that?" There is nothing to say at that point because it's just beyond words and it's too big. That was my point with the song.

MR: Nice. It seems like there is a lot of spirituality on this album. For instance, "Love And Hard Times" starts with God and His son coming to earth and enjoying its beauty, then it ends with how love is the big picture.

MR: Another of my favorites is "Rewrite." Your "Song About The Moon" came to mind.

PS: Yeah, you're right, I see what you're saying.

MR: Thanks. But to me, "Rewrite," in a broader sense, shows human nature wanting to apply happy endings to otherwise less than perfect lives.

PS: Yeah, a Vietnam vet--that's my generation--a burned out Vietnam vet is imagining that he could rewrite his life and give it a happy ending, that's what the song is about.

MR: And there's the title track, "So Beautiful Or So What." One of my favorite parts of this song is when you talk about telling a bedtime story--"It's a story without a plot. Will it have a happy ending? Maybe so, maybe not." Is that basically how you view life? It doesn't mean that it's bad or good, it is what it is?

PS: No, I think it's like you have a choice you can make. It's your choice that it's so beautiful of so what--it's up to you.

MR: Who are the musicians playing on this album?

PS: Well, the drummer is Jim Oblon, he's playing on five of the tracks; the percussion on "Dazzling Blue" is these Indian musicians who are teachers of one of the guys in my band who didn't play on the album; Vincent Nguini played the rhythm guitar part on "Getting Ready For Christmas Day"; on "So Beautiful Or So What," I played the electric guitar and he played the acoustic, single string lines. All the rest of the guitars are me. Then, Doyle Lawson and Quicksilver is a bluegrass group, whose work I really liked, and I asked them to sing on "Dazzling Blue." There's a piano on "Love And Hard Times" played by Mick Rossi, who has joined our band. Now, I have a really great piano player for the first time in a long time.

There is a song with an orchestral string arrangement done by Gil Goldstein, the well-known jazz arranger, and a friend of mine. I sampled the harmonica solo in "Love Is Eternal Sacred Light" from an old recording of Sonny Terry. In "Love And Blessings," I sampled The Golden Gate Jubilee Quartet. So, I was using sampling for the first time, and I was using very old sounds to put in the middle of a very contemporary sounding record. There is no bass on the record--a couple of tunes have baritone guitar, and some things have a talking drum or something, but essentially, there is no bass. Essentially, it's three musicians--me, Jim Oblon on drums and Vincent Nguini on guitar.

MR: It's really amazing you pulled off making such a full sounding album not using bass in the traditional way. So, what is your advice for new artists?

PS: Come up with another question because I don't have an answer for that.

MR: Okay, what do you think about what's going on in music now?

PS: I think there is a lot of interesting stuff that I hear in the indie music world. It seems like musicians are better educated and better trained. You have music majors coming out of college who have already studied Philip Glass and Steve Reich, and they know a very wide range of music. Sometimes, I hear really interesting records. I heard a record the other day that was really nice by James Blake, who is English, and I think he's twenty years old. I liked that record quite a bit. Otherwise, when I listen to the radio...on satellite radio, I listen to old country, old rock 'n' roll, '50s, blues, and that's about it. The rest of the time, I'm either listening to CNN, NPR or major league baseball.

MR: So Beautiful Or So What is my one of favorite Paul Simon albums, and I really wish you all the best with it. Also, thank you for inspiring me to pursue music. Your songwriting and recordings truly were responsible, and I'll always be grateful.

PS: Oh, well, that's great. That's great when that happens. I have my people that I can thank too.

MR: Beautiful. Again, thanks so much for the interview and the time, Paul.

PS: It was nice talking to you...bye.

CD
1. Getting Ready for Christmas Day
2. The Afterlife
3. Dazzling Blue
4. Rewrite
5. Love and Hard Times
6. Love Is Eternal Sacred Light
7. Amulet
8. Questions for the Angels
9. Love & Blessings
10. So Beautiful Or So What