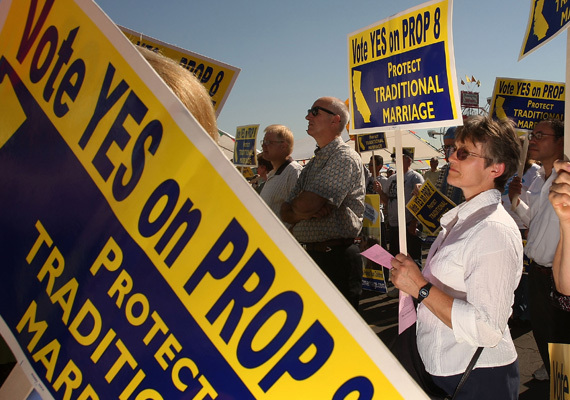 Some in LGBT community did nothing to stop this.
[Photo by David McNew/Getty Images]

The 1980s and early 1990s will forever be a shameful period in United States history. The way the LGBT community was treated by our political leaders, our schools, our religious institutions and even (in many cases) our parents was despicable. Television shows, movies and even radio shows constantly portrayed members of the LGBT community as perverts, psychopaths and people not deserving of any type of love, especially in the mid-1980s. The amount of LGBT members we lost due to suicide (no, they weren't selfish) AIDS, and other effects of being marginalized is too high to count.

The fact remains that many of those people who accept us today were some of the people saying we deserved to die of AIDS, we deserved to be bullied, we deserved to be beaten to death, we should be fired from our jobs and we didn't deserve to get married. We should embrace their change of thought, but should not forget their past actions; if we do, history will only repeat itself.

There were so many in the LGBT community who fought against the backlash. However, the reason such an intense backlash against the LGBT community existed is because a good portion of us refused to speak up or be acknowledged as part of the community. We like to bring up the homophobic past of others, but many of us need to look at ourselves in the mirror and visit our past. This will be extremely uncomfortable, but think about the following questions:

This list can go on and on. And if you answer was "Yes, because I needed to survive!" to one, some, or all of these questions, don't get angry. You are not a bad person by any means, but need to think about this when you call out politicians or other famous figures, who are now pro-LGBT, for their past homophobic behavior. There are a number of people in the LGBT community who could answer "No" to all of these questions and they are true heroes who deserve all our gratitude. But we can never forget a horrific past that some of us actually participated in. Yes, we certainly need to move on. But taking a look at past actions can make sure that history doesn't repeat itself.