My boobs don't like you. They don't want to be here right now with you drinking wine. In fact, my boobs would rather be at home with my kids. I'd love to stay, really I would, but my boobs are being very insistent and making things awkward for everyone. No, I did not spill on my shirt. That's just my boobs letting me know it's time to go home. 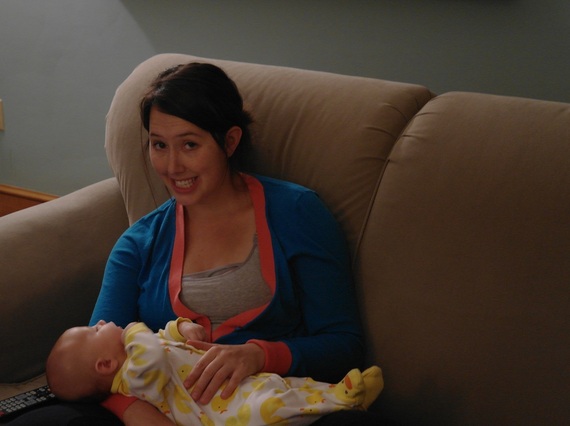 I had a baby eight months ago. The day after his birth, I woke up feeling like someone had dropped two cement blocks on my chest -- two cement blocks that shot milk like a maternal cannon. Overnight, my boobs had become sentient. Like a robot out of control, they were hell-bent on destruction. The first night my baby slept longer than five hours, I woke up in a pool of liquid. I shook my husband awake.

"I think someone wet the bed," I hissed. He blinked and then pointed to my chest. My shirt was dripping with milk. "Your boobs just ruined our sheets," he said. I lifted up my shirt and milk squirted his face. My boobs demanded to feed something and there was nothing I could do about it. I caved and got up to pump. These beasts had to be tamed.

Another time, after indulging in a long nap, which is a luxury for any mother, I got up to find my boobs angry at me. When I went to change my shirt, they sprayed the room with a fine mist of milk. I ran into the bathroom and stood over the sink, shouting for my husband to bring me a bottle -- I couldn't let that liquid gold go to waste. But apparently, shouting, "Help! My boobs are making a mess!" in my house doesn't have the urgency it once did. My husband arrived several minutes later carrying the baby with the 2-year-old in tow. And we all watched my milk go down the drain as a family. I could almost hear my boobs whispering, "That will teach you to take a nap."

My boobs have calmed down since then. They no longer rise up to smack me in the face when a baby (any baby) cries, and they no longer send me threatening notes demanding that they feed something every two hours or else the nursing bra gets it. But they're still unwieldy, unmanageable hydras that are growing from my chest.

I've tried to decommission them with bottles, but my child is having none of that. He gums the bottle and then screams in my face as if to say, "Release the hounds!" And I do; eventually, I always do. Because babies and boobs always win.

All of this to say: this is why I can't come out to your concert, or have dinner with you, or indulge in that delicious second glass of wine. I love you. I miss you, my friends, I really do. But the ultimate truth is that my boobs don't feel the same way. They hate you. They'd rather not hang out. As a result, they only let me leave the house for a couple of hours before they demand to be taken back in. I'm their slave. It's a kidnapping. I really think the FBI should be involved. I want to see light. I want to have a conversation with a person who doesn't poop their pants or vomit down my shirt.

One day, I'll break free. One day, I'll be able to sit here and finish this glass of wine or two with you, my dear friend. One day... Oh wait, my boobs say it's time to leave. Right about now.