Here in the U.S., culture is... space, speed, cinema, technology. This culture is authentic, if anything can be said to be authentic. -- Jean Baudrillard 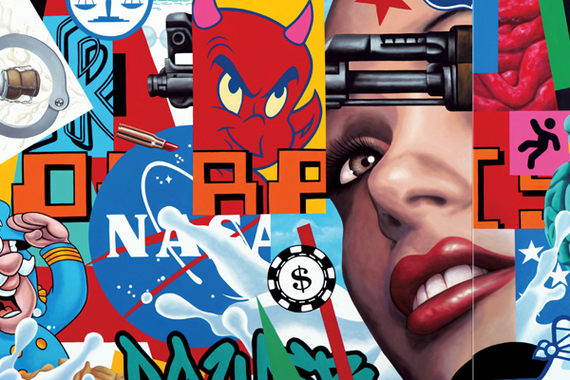 Enjoying what has been a glorious and global 30-year career, the boyish-at-50 French-born artist Speedy Graphito has the next 30 years in his sites. So he did what a lot of people do when they develop an appetite for reinvention -- they sail to America. Speedy has spent the last three years on a journey of expansion and evolution, the majority of which were occupied with living and working in America. Well, not really America -- Malibu. But still. A case could be made, as Baudrillard and other cultural theorists have done, that Los Angeles is very much the real America. It's the whole world's shiny dream factory. It is the place in America where that which the whole world thinks of as America is produced every day.

"What you have to do is enter the fiction of America, enter America as fiction. It is, indeed, on this fictive basis that it dominates the world." -- Baudrillard

This volume's title Made in America operates on multiple levels, not unlike Speedy's work itself. It's an accurate description of its contents, since all the work it includes was made here in Speedy's LA studio. It's also a reference to the iconographic and narrative symbolism being deployed and represented throughout the work, which takes as its raw compositional material the ubiquitously exported popular culture manufactured here -- which had long ago reached Europe, of course, and left its mark. To a certain degree Speedy's most recent work hearkens back to earlier periods in his work in its relative simplicity, directness, flirtation with painterly abstraction, and navigation of the porous borders between folk, pop, personal memory, and collective nostalgia. Soon enough, his raw, experimental, frequently multidisciplinary investigations of the tribal quality of cultural memes had already acquired much of what would become his signature style -- an opulent, dizzyingly elaborate, increasingly text-based lexicon that included not only images evoking American cartoons, comics, and commerce -- but expressly appropriating these images and logos into the vertiginous compositions. It is easy to see how such chromatic, arresting, accessible, volatile work would recommend itself for deployment across street art's favored environment of exteriors. Again Baudrillard would ask, What is a society without a heroic dimension? 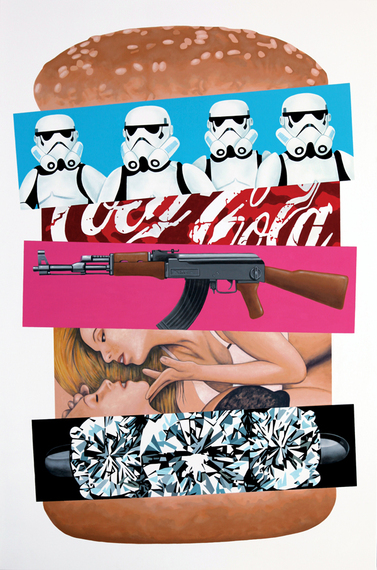 Generations of young European artists, in France especially, continue to look up to him, influenced by both his urban art successes and by his resistance to conventions within the gallery-format exhibition parameters. Speedy has always been part of a transglobal community. In the course of his travels, the vibrancy and innovativeness of street art still gets him inspired, but he's ready for what's next. It's a move one might say from "urban contemporary" to just "contemporary" -- a category that now firmly embraces not only Pop Art in its pantheon, but as of fairly recently, street art as well. In moving away from the gilded cage of that genre's label, Speedy has instead embraced the wild American west for its freedom, relative lack of boundaries and rules, and encouragement of chance-taking. It's not only a personal transitional zeitgeist he's tapped into, but it's a fully hybridized cultural moment he's both inhabiting and helping to define.

His time in America has been action-packed and every detail in the history of the change it has wrought is chronicled in the work he is producing here. "FreeWay" in 2011 was his debut US show, and naturally it was a very animated affair, with chic work infused and interrupted by tags, sprays, and stencils. At the time, I wrote in LA Canvas that the show resulted from "Speedy's two-month stay as Castanier Gallery Artist-in-Residence, during which time he'll be bombing the city from Venice to the Valley, plus making the new work, and being followed by the camera and crew of a documentary film on his life and work to be released this December." The film ended up following him for two more years, well into 2014, but the citywide juggernaut, followed quickly in January 2012 with live-mural-making appearance at the LA Art Show -- and by then it was clear that his love for the City of Angels would be reciprocated. He got his papers in 2012, and celebrated by making new work for the "French Invasion" show. By the time of his much-anticipated 2013 "NewWorlds" show he'd accomplished total immersion in his new hometown. Around that time, I wrote for the LA Weekly that, "Speedy, like so many artists, felt drawn to L.A. and moved mountains to live and work here. He gave himself over to the lines, light, rhythms, pop culture and sugary, polychrome beauty of his adopted hometown, and the results speak to the language of the global digital media stream we call modern life..." 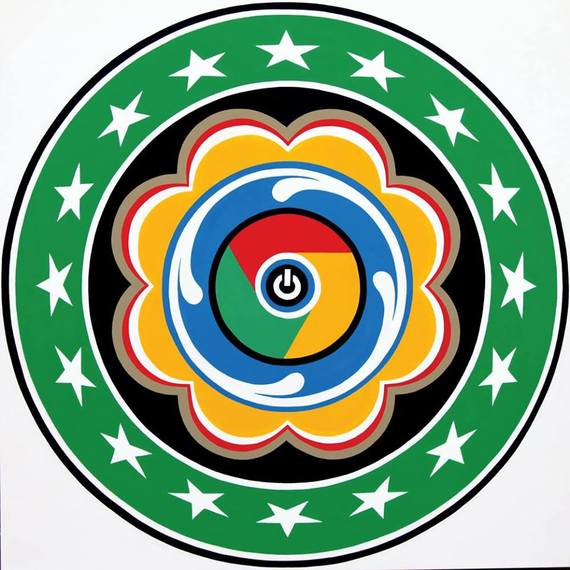 The international street-art style, thanks in part to the tireless efforts of practitioners like Speedy himself, has become firmly ensconced in the mainstream contemporary art conversation. Part of his particular magic is his gift for retaining in his fine art practice the urgency and immediacy of the urban melee that inspires him, proving that its outlaw sex appeal can survive a return to advanced technique and high production value, without sacrificing any of the salient social critique or arresting aesthetic qualities that gives it its voice. All of this has been and remains very much on Speedy's mind during these catalytic years. By the time of the Miami pop-up exhibition "Hypnotic" in February 2014, he had produced a suite of blockbuster pieces in which an expanded cast of characters from Snow White to Garfield to Scrooge McDuck took on tropes of psychedelia, Rorschach mirror-imaging, and consumerist frenzy. And he made an epic sculpture of a bombed-out car crushed under a meteorite-size spray can, in a life-sized cartoon tonnage of labor, illusion, and wit. By that time his work had become both more simple and more bold, glistening and robust like stained glass, less raw and rough, crisper, but still tumultuous, like gardens of organized chaos. A personal and professional transition was clearly underway, and Speedy was out in front of it laughing, entertaining, and generous.

His forging of a new, composite vision taking into account all his influences from Europe to the Pacific Coast Highway manifests in the work from this period. His "Atomised" wall constructions literally blow apart comic-book heroes like Wonder Woman, Spiderman and the Silver Surfer, reformulating them into explosive abstractions of color and panache that invigorate rather than destroy their nostalgic allure. Also on wood, his large-format screen-shot paintings mash-up quasi-traditional portraiture and landscape with billboard-slogan effervescence and political and cultural intrigue. "Loading" is a breakthrough masterpiece of this time -- a three-meter long mixed media painting of a very frustrated Mickey Mouse, in an image-rich, anxious cacophony of mark-making and optical collage. A video installation completes the work, in which the painting is shown in various states of "pending download." Speedy's intuitive knack for bringing the analog and digital realms together mirrors other forms of his flair for synthesis. 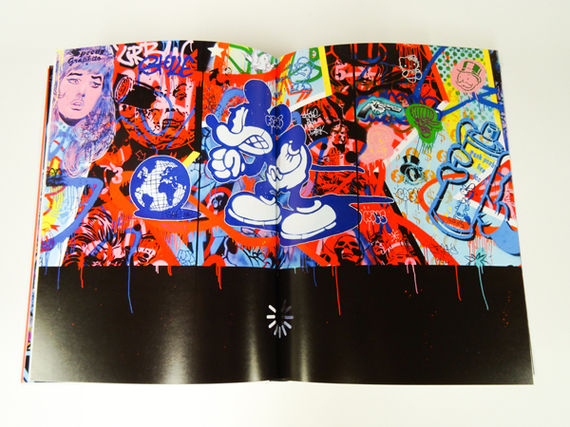 Speedy Graphito: Made in America

His "Instant Replay" paintings use regiments of stylized diode-shaped pixels in a nod to the lower resolution at which our childhood memories are stored, again culling heroic stills of television serial heroes from Spock to Adam West as Batman, that speak to carried-over pop-infused American-made retrophilia. Between the crispness and precision and high gloss Lately, he's looking more like Roy Lichtenstein than a rogue muralist -- and if Roy were working now, his characters would definitely be texting each other. His next show with Castanier is in May 2015, representing both the end of an era and the start of a new one; coinciding with a wrap on that multi-year documentary film project, and starting anew as cleanly as it is possible to do. As our spiritual advisor in this project, Baudrillard, has pithily observed, It is always the same: once you are liberated, you are forced to ask who you are...

The truth is, he's not really a street artist. Olivier Rizzo went to the St. Etienne School in Lyon, a Beaux-Arts style academic environment where he learned all the classic tricks and some new ones, too. Looking at collections of his early work, especially that made during the 80s, it was primitive, tribal, urbane, and folkloric -- but one can clearly see the lingering scars of a higher education that imparted advanced technique but left students pretty much on their own when it came to what to say with all that skill. From these early years right on through to today, one thread of Speedy's story that endures is his pursuit of a balance between high and low, past and present, present and future, idea and technique, form and story. And when it comes to his omnivorous choice of mediums, there again, he is much more than street. As Fabien puts it, "He's a complete artist." Though primarily a painter, his forays into photography, video, animation, performance, and especially sculpture speak to the dexterity, agility and the sure-footedness of his capricious visions. Perhaps it's not surprising that inside the exuberance animating his newest work, he rediscovers his original framework of social allegory, signifiers, and avatars -- and because he's an American now, that means using girls, cars, money, technicolor, cartoons, and superheroes to build a living monument to this captivating new world. 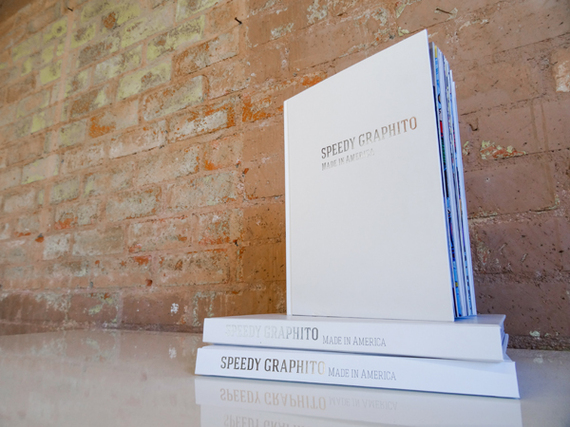 Speedy Graphito: Made in America

Speedy Graphito: Artificial Paradise opens Saturday, May 2 (6-9pm) at Fabien Castanier Gallery in Culver City. Copies of Made in America will be available at the gallery. The exhibition will run from May 2 - June 6, 2015.