I was wild about Star Trek as a kid but unlike my school buddies, I wasn't fond of Captain Kirk. He was way too fiery and combustible.

Spock was my hero: calm, rational, and funny in that understated way. He didn't bluster, he observed, and he solved problems with Hemingway-style grace under pressure. Nothing fazed him. I admired that wonderful sense of balance.

He was intriguing for other reasons. He was Jewish--and not just in real life. He was a space Jew in a way: different from the rest of the crew, often misunderstood and even mocked. A stranger in a stranger land.

The Vulcan salute was his own invention, inspired by the special gesture that Kohanim, Jews descended from Aaron, use when they recite the Priestly Benediction over their congregation at Rosh Hashanah,Yom Kippur and some other Jewish holidays, though traditions vary among denominations and between Israel and the Diaspora. 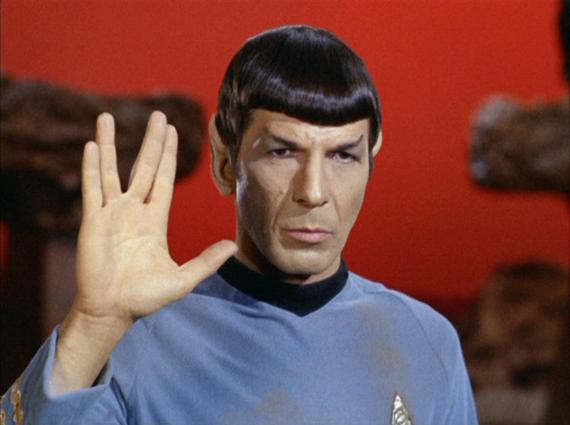 It's drawn from Numbers 6:23-27 where Aaron blesses the Israelites. In modern times, rabbis' hands are spread out over the congregation and their heads and hands are covered with their prayer shawls as they chant. The moment can be very solemn and awe-inspiring. In Yiddish it's called duchening and there are various explanations for what the finger positions means. Here's an English version of the benediction:

Spock's "Live long and prosper" always seemed a distillation of that blessing and a it gave me a thrill that he was boldly going where no Jew had ever gone before, spreading peace. His Vulcan salute made me feel at home wherever he landed.

May his memory be for a blessing.