While speculation exists that "Deflate Gate" was a one time occurrence, data I introduced last week indicated that the phenomena MAY have been an ongoing, long standing issue for the New England Patriots. Today, that possibility looks as clear as day.

Initially, looking at weather data, I noticed the Patriots performed extremely well in the rain, much more so than they were projected. I followed that up by looking at the fumble data, which showed regardless of weather or site, the Patriots prevention of fumbles was nearly impossible. Ironically, both studies saw the same exact starting point: 2007 was the first season where things really changed for the Patriots. Something started in 2007 which is still on-going today.

I wanted to compare the New England Patriots fumble rate from 2000, when HC Bill Belichick first arrived in New England, to the rest of the NFL. Clearly, one thing I found in my prior research was that dome teams fumble substantially less frequently, given they play at least 8+ games out of the elements each year. To keep every team on a more level playing field, I eliminated dome teams from the analysis, grabbed only regular season games, and defined plays as pass attempts+rushes+times sacked. The below results also look only at total fumbles, not just fumbles which are lost. This brought us to the ability to capture touches per fumble.

To really confirm something was dramatically different in New England, starting in 2007 through present, I compared the 2000-06 time period (when Bill Belichick was their head coach and they won all of their Super Bowls) to the 2007-2014 time period. The beauty of data is the results speak for themselves: 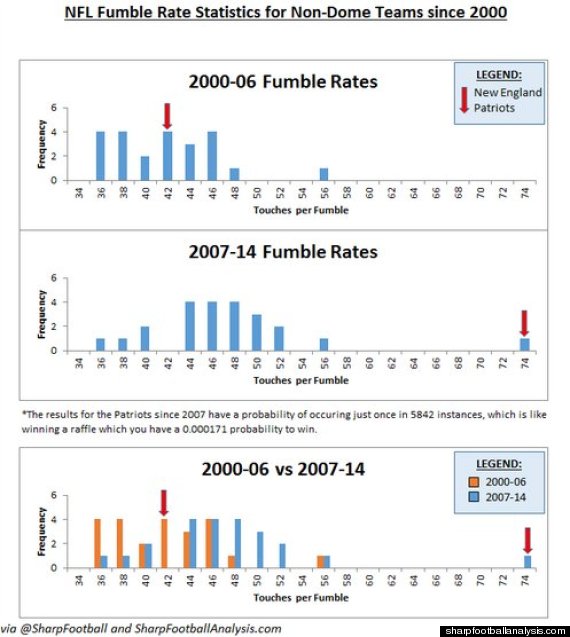 The data is jaw dropping, and this visual perfectly depicts what happened. From a more technical perspective, John Candido, a Data Scientist at ZestFinance who is a colleague of mine over at the NFLproject.com website and was also involved in the development of this research, comments:

Based on the assumption that plays per fumble follow a normal distribution, you'd expect to see, according to random fluctuation, the results that the Patriots have gotten since 2007 once in 5842 instances.

Which in layman's terms means that this result only being a coincidence, is like winning a raffle where you have a 0.0001711874 probability to win. In other words, it's very unlikely that results this abnormal are only due to the endogenous nature of the game.

Many of the arguments giving the Patriots the benefit of the doubt are evaporating. While this data does not prove they deflated footballs starting in 2007, we know they were interested in obtaining that ability in 2006. (This is something I found out AFTER I performed the first two analyses, both of which independently found that something changed starting in 2007.)

In 2006, Tom Brady (and Peyton Manning) lobbied in favor of changing a NFL rule, and as a result, the NFL agreed to change policies. Brady wanted the NFL to let EVERY team provide its OWN footballs to use on offense, even when that team was playing on the road. Prior to that year, the HOME team provided ALL the footballs, meaning the home quarterback selected the footballs the ROAD quarterback would play with on offense.

Obviously this information, when combined with the data above, is exceedingly compelling. Not only can you visually see the change when aggregating the data into periods of 2000-06 and 2007-14, you can clearly see how it occurs on the following two graphs. The data is the same, but details are added in the second graph to provide additional information and context: 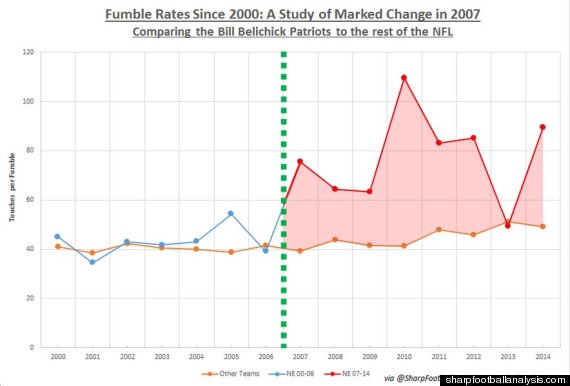 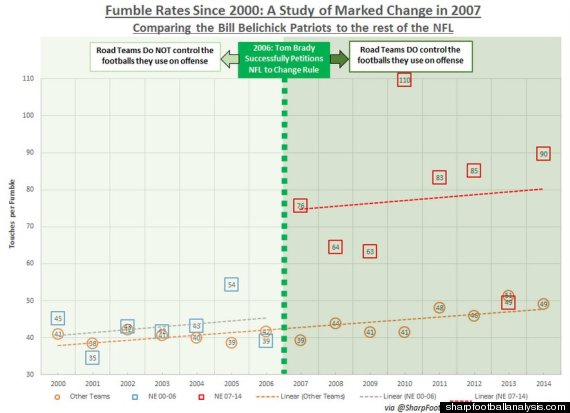 Once again, a key takeaway is deadly obvious: prior to 2007 the Patriots were RIGHT IN LINE with the league averages across the other non-dome teams. When you look team by team, they literally are in the middle of the pack for most seasons, as the histogram in the very first graphic at the top of this article shows. But starting in 2007, all similarities totally vanish.

The statistical "jump" the Patriots make in the 2006 offseason, from one fumble every 39 plays to one fumble every 76 plays is nothing short of remarkable. Their trendline over this period is not even close to that of the rest of the NFL.

The 2013 season is an oddity in that the Patriots were actually slightly worse than the rest of the NFL. Looking at that season, its apparent the reason: of the Patriots 23 fumbles that season, 6 (over 25 percent) occurred in a Sunday night game vs the Broncos played in 22 degree weather, with 22 mph winds and a wind chill of 6 degrees. Cold conditions of this nature absolutely cause more fumbles than usual. They fumbled a TOTAL of 5 times in 11 of their 16 games in 2013 (69 percent of their total games), so it truly was this week 12 "antarctic" game (and a week 17 game vs the Bills which saw 4 fumbles) which really put the Patriots fumble rates for 2013 out of sync. This is exactly why looking at small sample sets, such as single seasons, is not the preferred manner to investigate this analysis.

Why are fumbles so important? Because as Bill Belichick knows, perhaps more so than most NFL coaches due to his understanding of the game -- turnovers usually control game outcomes. Since 2000, teams who won the turnover battle won 79 percent of their games, regardless of ANY other statistic. A 12-5 record equates to 75 percent wins, so its clear how vital turnovers are in the minds of intelligent coaches. And as far as turnovers are concerned, the number one concern for a team with a quarterback as skilled and proficient as Tom Brady is not interceptions (because there won't be many), its fumbles.

There are many arguments which have been raised in favor of why the Patriots don't fumble as often as other teams. Many of them are simply factually incorrect. If it was coaching, former players should be able to tell us that Bill Belichick suddenly and drastically changed the way he instructed players to carry the football in the 2006 offseason. But the data shows that if mysterious trade secret was delivered, the players forgot about it when they left New England, as their individual fumble rates became drastically worse when playing for other NFL teams.

The bottom line is, something happened in New England. It happened just before the 2007 season, and it completely changed this team. While NFL teams apparently are complaining to the league that they felt the Patriots played with deflated footballs during the 2014 season and postseason, all investigations into those allegations would be wise to reference my research herein, and begin the investigation in the 2006. That was when Tom Brady was able to persuade the NFL to change its rules to allow him (and other quarterbacks) to provide their own footballs for all road games. I will reiterate, this analysis cannot say it was, undoubtedly, illegal football deflation which caused the data abnormalities. But it does conclude that something absolutely changed, and it was not the result of simple random fluctuation.

Because I was asked so often for the data that I used in the first analysis, as a courtesy, I am going to link an excel file with all the summary data used to create the graphics shown above. Support Data

Warren Sharp of sharpfootballanalysis.com is an industry pioneer at the forefront of incorporating advanced analytics and metrics into football analysis. A licensed Professional Engineer by trade, Warren applies the same critical thought process and problem solving techniques into his passion, football. After spending years constructing, testing and perfecting computer models written to understand the critical elements to win NFL football games, Warren's quantitative analytics are used in private consulting work, and elements of which are publicly shared on sharpfootballanalysis.com. To contact Warren, please email sharp@sharpfootballanalysis.com or send a direct message on Twitter to @SharpFootball.

Runs sharpfootballanalysis.com, an industry pioneer at the forefront of incorporating advanced analytics and metrics into football analysis.