My husband is a pioneer, traveling through uncharted and sometimes hostile territory. He is one of a select group of brave men who are upending stale notions and offensive stereotypes about gender and how we raise our children.

My husband is a stay-at-home father.

Rich is one of an increasing number of fathers who chose to quit their job and raise kids full time. His choice has benefited our entire family: Our kids have the time and attention of a fully devoted parent. I have been able freely pursue my career with a lot less distraction and stress. And Rich gets to have what he calls a “dream job.”

“If I could make this choice 100 times, I’d do it every time,” Rich said. “It’s a privilege that’s changed everything. I’m a better person now, a better citizen, I’m much more interested in service and community.”

We’ve been raising our two kids like this for six years, but it wasn’t until I started reporting this story that I fully realized just how novel our family is.

In the 1970s, only six men in the entire United States identified as a stay-at-home father, said Karen Kramer, a professor at the University of Illinois at Urbana-Champaign who has analyzed decades of census data on fathers. Now 20 percent of the men who are home with their kids have made the choice to be there, she said.

Last year, an estimated 1.9 million fathers were at home with their kids -- 16 percent of the stay-at-home population, according to a HuffPost analysis of census data. We looked at fathers who were unemployed for at least a year and are at home with a child or children under 18. The number rises and falls with unemployment and has dropped slightly since the Great Recession: down from 2.2 million, according to a 2014 report from the Pew Research Center.

HuffPost's methodology was pioneered by Pew researchers, and likely underestimates the number of dads taking on the role of primary caregiver. Fathers working part-time jobs to make ends meet and taking on the bulk of parenting were not included in HuffPost’s or Pew’s analysis. The Census Bureau has a more narrow definition of stay-at-home fathers that excludes same-sex partners and parents of kids that are older than 15, as well as families where both parents do not work.

In many ways, stay-at-home fathers are in the same place that working mothers were a few decades ago: They existed, but people weren’t quite sure what to make of them. That feeling changed over many years, and there’s reason to hope the same thing is happening now. “It’s a change in norms and values and ideology,” said Kramer. “That always changes slowly.”

More women are in the workforce now, and that has “given men an opportunity to do what they really want: Stay home, choose jobs in lesser roles and have more involvement with their kids,” said Al Watts, a stay-at-home father for 12 years and the president of the National At-Home Dad Network, a support group for dads that holds an annual gathering.

When I asked Rich to identify the hardest part of staying home with the kids -- we have a 6-year-old son and a 4-year-old daughter -- his answer had nothing to do with the work of parenting. “The most difficult thing is the alienation -- having a dream job that’s met with maximal skepticism.”

Modern times have moved well beyond the world of “Mad Men,” when Peggy Olson was a pioneer in a skirt. Yet stay-at-home dads still must contend with notions from that era.

Even in the liberal area of Brooklyn where we live, Rich doesn’t always get the support and acceptance you’d maybe expect. Some women have told Rich he must be a “real man” to feel comfortable staying home. Some men, on the other hand, have told him their wives wouldn’t think they were real men if they "didn't work."

Fifty percent of Americans assume that men would want to work full-time while their children are young, even if there’s no financial need, according to a new HuffPost/YouGov poll. While 64 percent of those surveyed said that children are better off when a parent stays home to take care of them, their attitudes about men who choose to do so were more divided.

Seventy-seven percent believed that women would want to quit working, or work part-time, to be with their kids. Thirty-nine percent of those surveyed said that it is better for children to have their mother stay home to take care of them. Only 2 percent said it was better for the father to be at home.

“A lot of people don’t know what to make of me,” said Liam O’Hagan, who stays home with his kids ages 10, 8 and 6 in Mamaroneck, New York. (Read more about O'Hagan's choice to stay home here.) 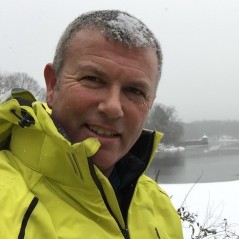 When O’Hagan and his family were living in Chicago about five years ago, a male neighbor was constantly trying to hook him up with a job. “He couldn’t understand why I wouldn’t want to work,” O'Hagan said.

The 45-year-old is the lucky human who doesn’t need to work. His wife, Sarah Robb O’Hagan, is the former president of Gatorade and the current president of Equinox, a global fitness company. “I’m fortunate that whether I work or not won’t make any difference to our financial situation,” he said.

O’Hagan’s wife, Sarah, says that the women she works with say “that rocks!” when they hear her husband stays at home. Men typically don’t say anything.

David Bower didn’t choose to be a stay-at-home father. He had a 5-year-old son and daughter on the way when he was laid off from his construction job in 2000. His parents were also sick. He and his wife didn’t want to pay for daycare for two kids and home care for his parents -- and it was important to them to have at least one parent home with the baby -- so he stayed home.

It was overwhelming at first, said Bower, who lives near Raleigh, North Carolina. And you never really get used to the monotony. “It’s kind of like I was cut off from the world at a point that bothered me a little bit.” There was also, of course, “ribbing” from his friends -- things like getting called “Mr. Mom.”

Bower ultimately went back to work. After his daughter started school, he picked up a night job while his wife worked days.

Still, he remembers that time fondly. “Probably I’m closer to the kids. If I had been working all day, when I got home the last thing I would’ve bothered with was kids playing with me,” he said.

About 80 percent of the stay-at-home dad population would be working if they could, said Kramer, who analyzed census data from 1976-2009 on fathers for a paper published in 2013.

These are fathers who were laid off and can’t find jobs or who are disabled and physically cannot work. They’re typically lower-income and are even more likely to cling to outdated views on fatherhood, said Kramer.

That’s certainly what Noelle Chesley found when researching stay-at-home fathers for a paper published in 2011 in the journal Gender & Society. Chesley, an associate professor of sociology at the University of Wisconsin, Milwaukee, conducted extensive interviews with 21 couples from the midwest, at a mix of income levels, where the father stayed home and the mother worked.

In more than half of the couples she interviewed, either the wife or husband expressed the feeling that the father should be working, or said that their friends and family made them feel that way.

“[The] perception [among] most of my friends is like ... ‘get a damn job,’” said one father. His wife told Chesley that her parents were initially supportive of his decision to stay home after he suffered a layoff. Yet more recently, she said, "They wanted him to get out and to work for the family."

Still, Chesley’s research is encouraging. “There’s evidence that no matter why fathers stay home, staying home has an effect on attitudes about work-family balance,” she told HuffPost. “Some of the men I spoke with found the experience of being an everyday parent very transformative. It opened their eyes to what mattered.”

Chesley found that some fathers in her study who went back to work had radically changed their outlook on how to spend their time and what their priorities were. Some said they would only consider jobs that offered flexibility so they could continue to be heavily involved in family life -- even though they used to work traditional long hours. One father said he voluntarily left a demanding job to return home because his new position took him away from his family too much.

“I found myself talking more about family than I ever had, because I was more family orientated,” one of them told Chesley. “I think after being with [my daughter] for that amount of time, I didn’t want to work 10 hours a day, 6 days a week. ... I’d rather have been home.”

Experiences like this may ultimately help move the needle forward on what we expect from mothers and fathers -- at home and at work.

Lamel Moore, 34, chose to stay at home with his 15-month-old daughter in Providence, Rhode Island. He does work part-time, so wouldn’t officially count as a stay-at-home father under the census definition. Growing up in Queens, Moore didn’t know his own father, and most of his friends were also raised by single moms. He promised himself that if he ever had a child, he’d be a real part of his or her life. 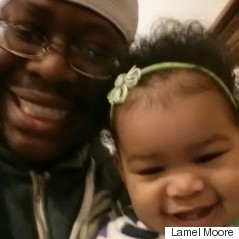 “I wanted to make sure I was there for my daughter as much as possible. I think it’s cool to have the connection with my daughter. She sees me from the time she wakes up until I get to put her to bed,” he said, adding that his friends and family have been supportive of his choice.

At the playground, though, Moore gets some surprised looks. He's typically the only father there -- and almost definitely the only African-American father. “I am kind of a novelty,” he said.

The number of stay-at-home parents who are men is an estimate based on 2014 census data accessed via the University Minnesota's IPUMS-CMS system.

The HuffPost/YouGov poll consisted of 1,000 completed interviews conducted May 3-4 among U.S. adults using a sample selected from YouGov's opt-in online panel to match the demographics and other characteristics of the adult U.S. population.