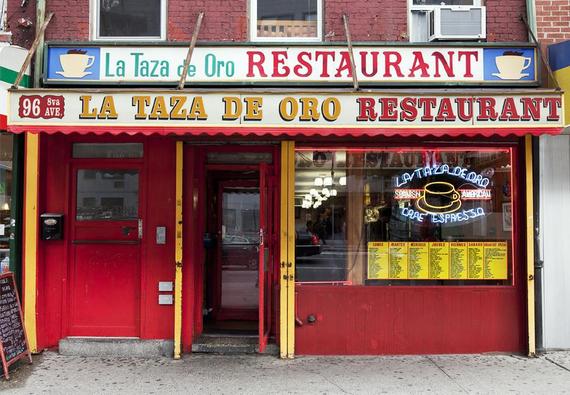 Mom and Pop shops--small, family-run businesses--are dying off in New York City at an alarming rate. They are being squeezed out by gentrification, skyrocketing rents, and competition by big impersonal chains. And so far Mayor Bill de Blasio seems disinclined to do anything about it.

That's why James and Karla Murray's new coffee table-sized book, Store Front II: A History Preserved, is so crucial. Like anthropologists rushing to document an isolated Amazonian tribe before civilization encroaches, the Murrays are racing to record Mom and Pop shops before the wrecking ball arrives.

The Murrays' first volume, Store Front: The Disappearing Face of New York, was published in 2000; a depressing two-thirds of its subjects no longer exist. Store Front II just came out this year, but already an alarming one-fifth of its contents have closed.

If you are a longtime New Yorker, the experience of reading Store Front II is like perusing the most beautiful old family photography album in the world. On every other page are beloved but deceased relatives. Allow me to reminisce about some personal heartbreakers:

My heartbreakers are all in Manhattan, but the exhaustive Murrays cover all five boroughs and many different neighborhoods in their anthropological research. In addition to being great photographers, they have an eye for typography. Each of the storefronts they've chosen, as well as being endangered, has stunning old-school neon or touchingly handmade signage.

The Murrays also have a knack for personal stories. Most of the photographs are accompanied by an interview with the owner explaining how the store came into being, what the customers were like, and--in far too many cases--why it closed. In the near future, when New York City has been turned into a giant luxury strip mall, this will be an invaluable document of the paradise that was lost.