In the face of 21st Century misogyny and a general discomfort with public nipples of the female variety, a male street artist named COMBO just staged a high profile half naked protest with wheat-paste, brushes, and breasts in Paris on July 14. Reinterpreting the painter Delacroix's Liberty Leading the People that commemorated the July Revolution of 1830, COMBO brought the famous topless symbol of Liberty into the streets of 2013 by way of tribute to a brash new feminist movement that is appearing more often across Europe. 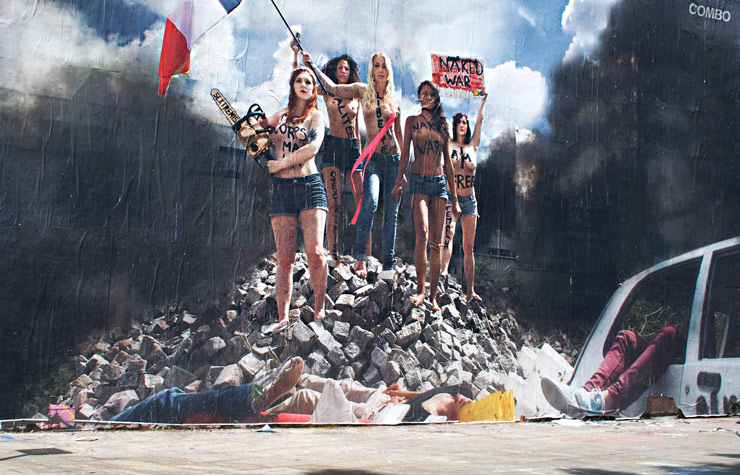 COMBO. "Femen Leading The People (or the street's tribute to feminism)". Detail. Paris, France. July 2013. (photo © and courtesy the artist) 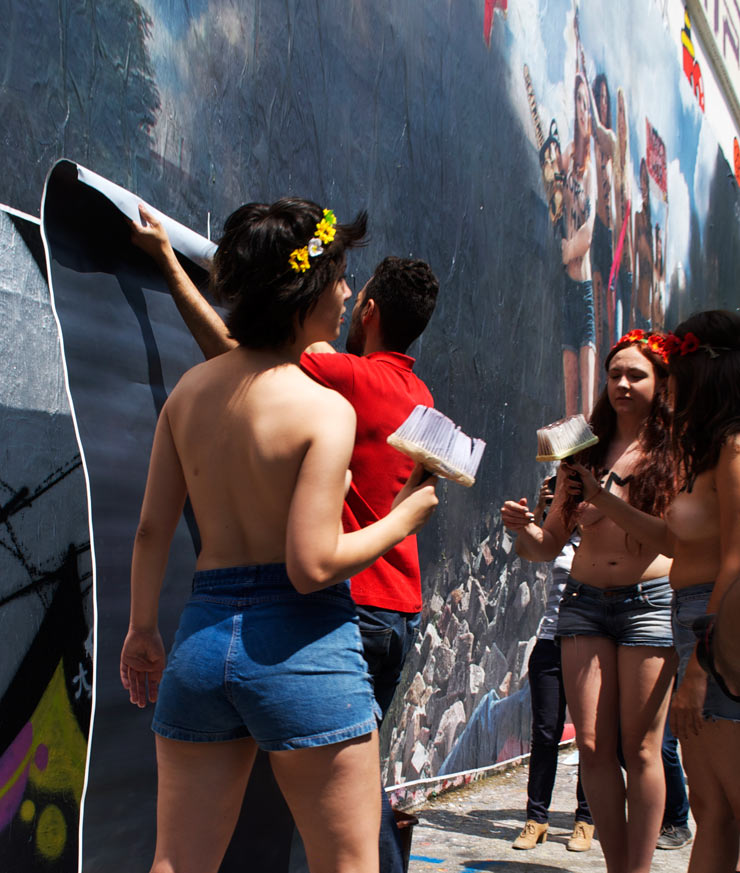 COMBO. "Femen Leading The People (or the street's tribute to street feminism)" Paris, France. July 2013. (photo © and courtesy the artist)

Sure, breasts of young women are naturally attention grabbers and they've been accused of cheap manipulation to sell an idea but they contend it is on par with the same objectification that is used to sell shampoo or cars and this time women are the decision makers regarding message.

"A woman's naked body has always been the instrument of the patriarchy," Shevshenko is quoted as saying in The Guardian, "they use it in the sex industry, the fashion industry, advertising, always in men's hands." Rather than presenting the allegorical goddess-figure of 19th century painters, these women are not striking a pleasant and pliant pose, but rather one of power in their efforts to champion rights for women and girls. 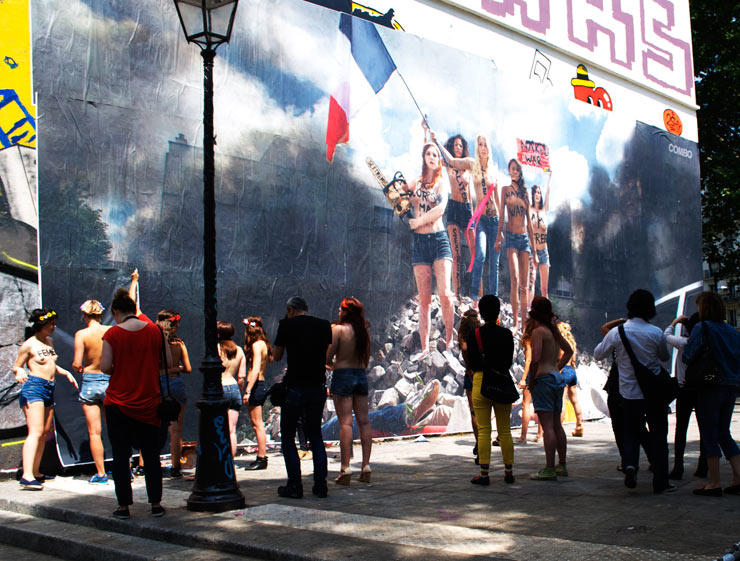 COMBO. "Femen Leading The People (or the street's tribute to street feminism)" Paris, France. July 2013. (photo © and courtesy the artist)

It's traditional for the President of France to unveil a new version of the heralded Marianne on July 15 to be used on an official stamp, and COMBO may have intended to upstage the unveiling by a day. And in a matter of uncanny timing, this little bit of wheat-pasting presaged the news that the actual inspiration for this years model was none other than Inna Shevshenko.

According to Reuters "A postage stamp depicting France's cultural symbol Marianne has touched off a flurry of controversy after one of its creators revealed it was inspired by a topless feminist activist who hacked down a Christian cross in Kiev last year with a chainsaw." Which leads us back to the Street Art installation and photo op -- COMBO tells us that his new piece stayed complete for only one day until it was smothered by graffiti.

Well, not the top half. 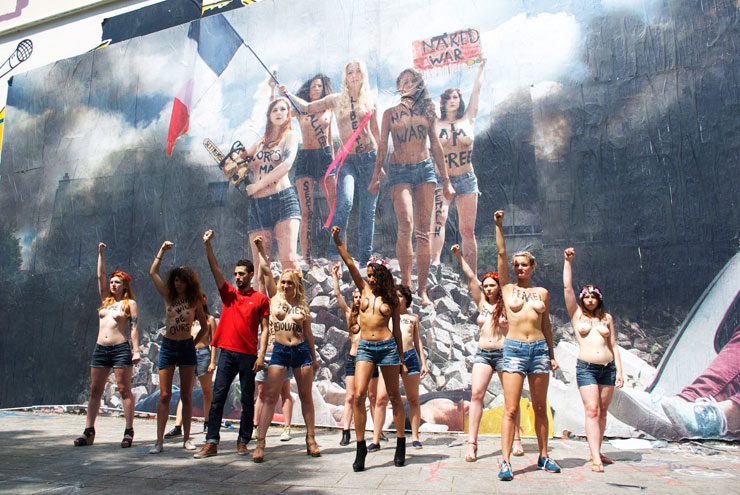 COMBO poses with members of Femen before their just completed installation in Paris. (photo © and courtesy the artist) 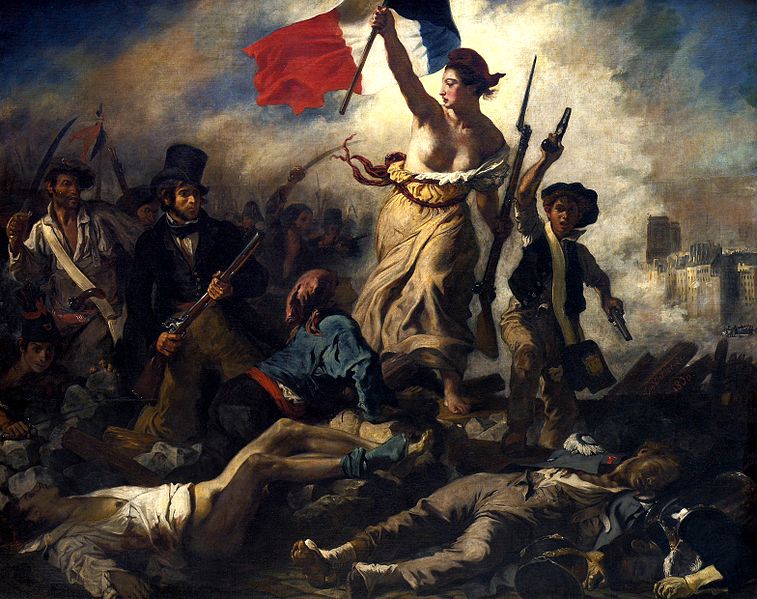 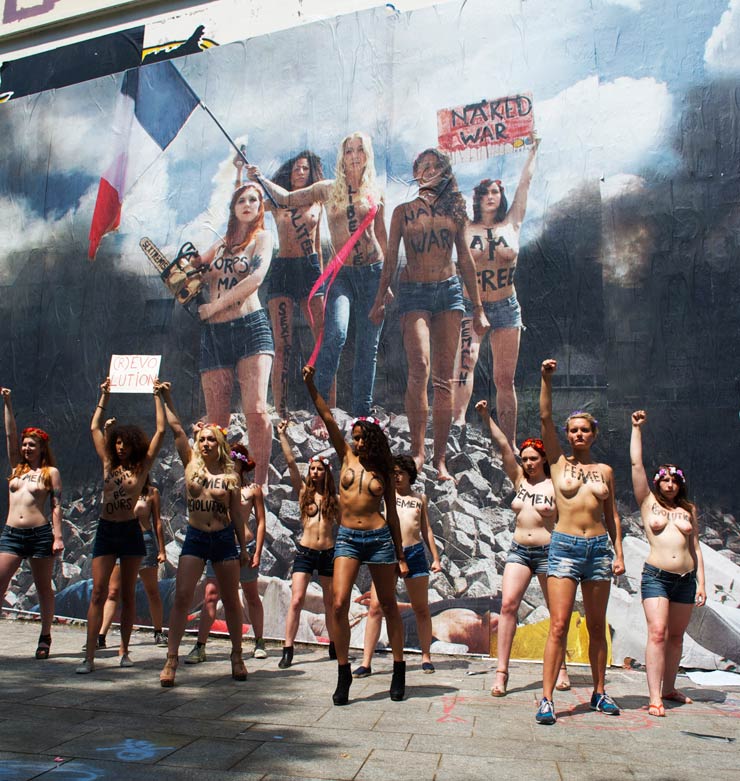 COMBO. "Femen Leading The People (or the street's tribute to feminism)" Paris, France. July 2013. (photo © and courtesy the artist) 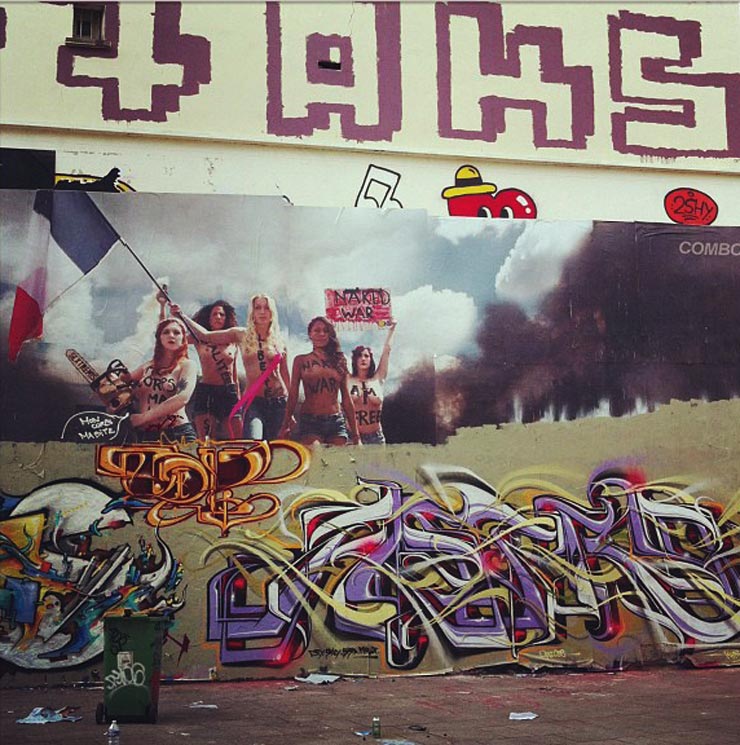 COMBO's installation today as graffiti takes over the lower portion. (photo © and courtesy the artist)