Millions of Americans are plagued by student loans, an albatross hindering them from taking adult financial steps like buying a house or moving out of Mom and Dad’s basement. The Federal Reserve Bank of New York said Tuesday that outstanding student loan balances recently grew to $1.16 trillion in the U.S. But one group is disproportionately affected by student debt.

More than 40 percent of African-American families had student loan debt in 2013, compared with 28 percent of white families, according to an analysis by the Urban Institute, a Washington-based think tank studying issues of education, health policy and low-income families. African-American families also typically take on more student debt -- $10,295 on average, compared with an average of $8,020 for white families.

The student debt disparity is just one factor adding to a yawning gap in wealth between black and white Americans. 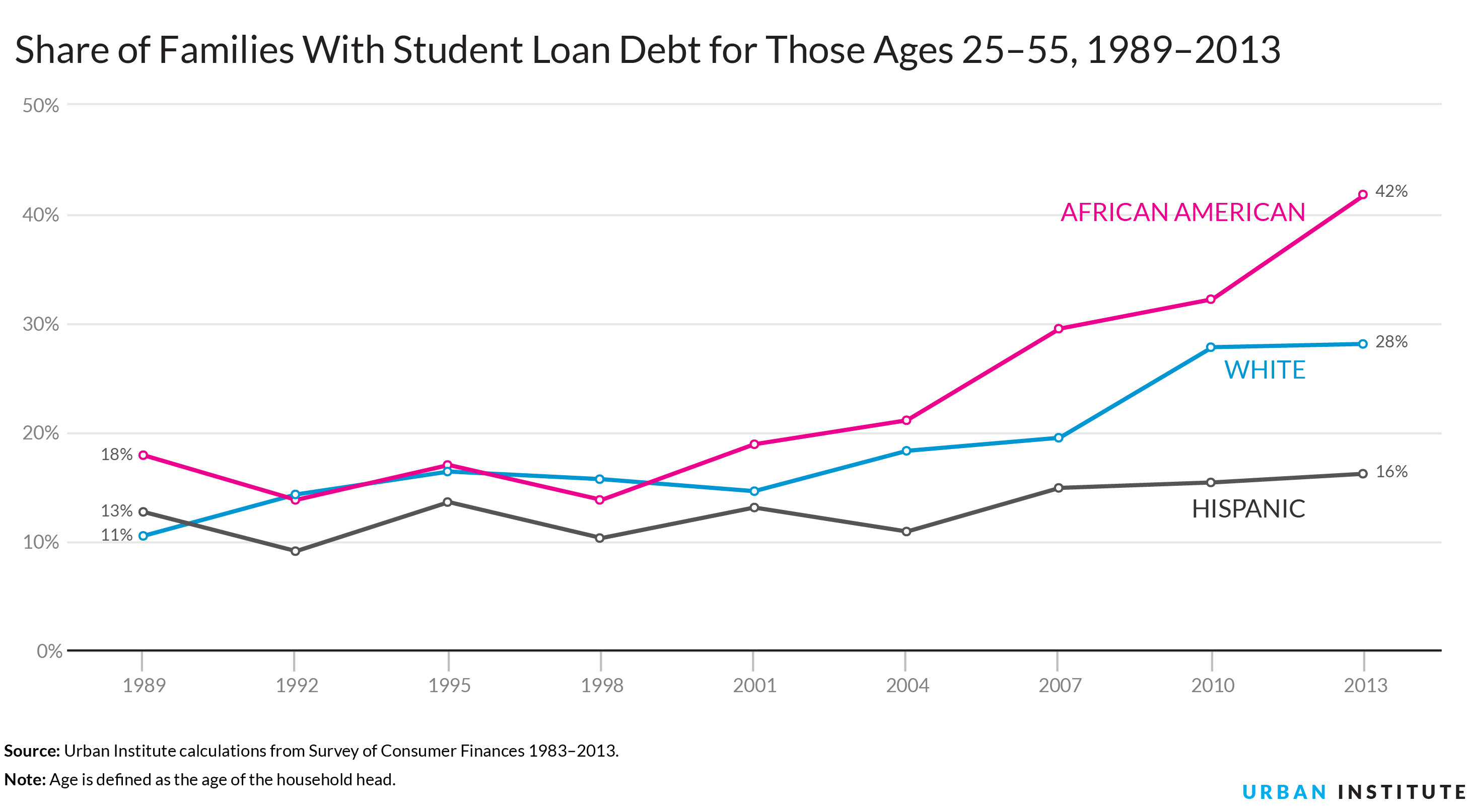 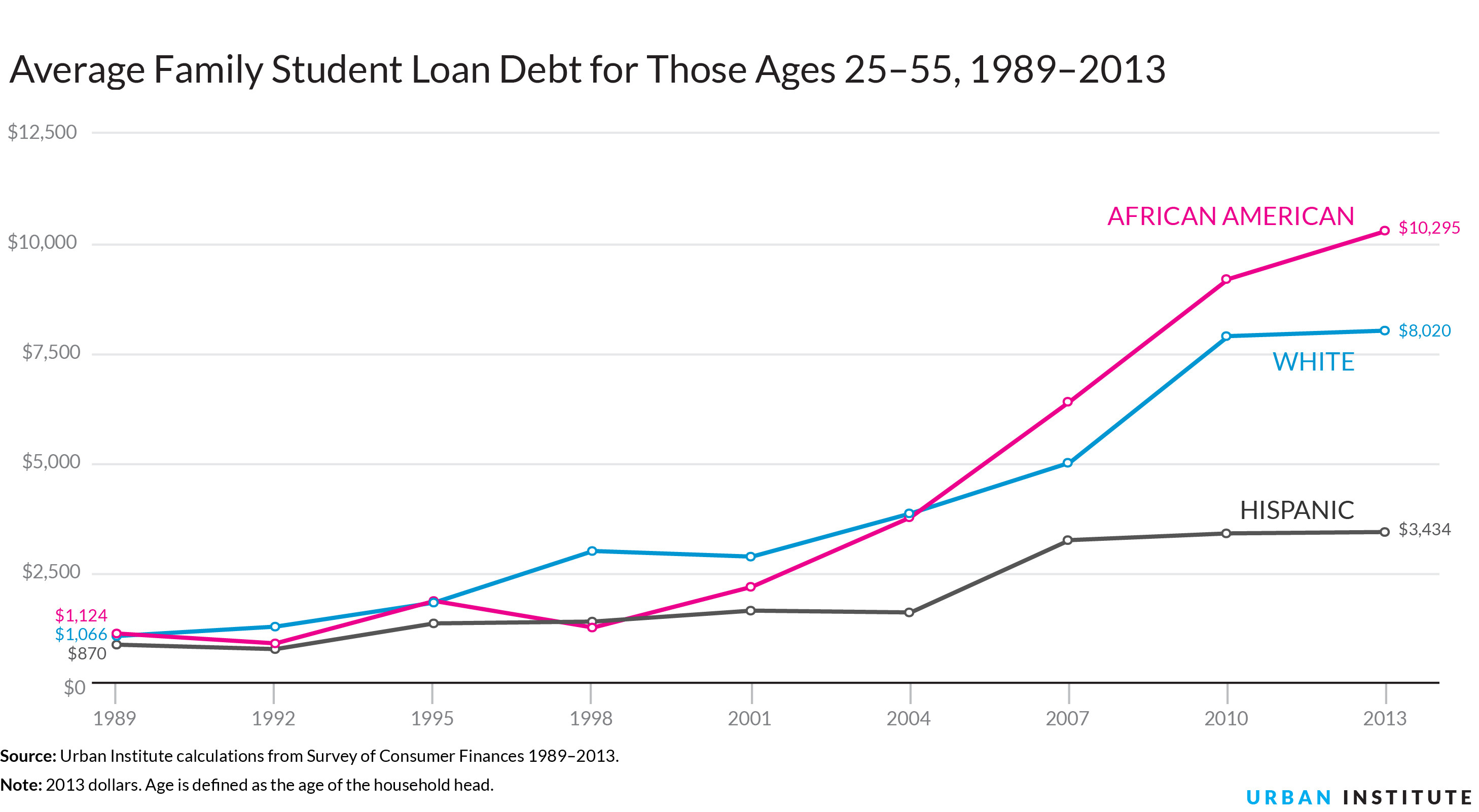 One big reason black families are more likely to borrow for college is because they’re less likely to have access to traditional sources of wealth such as inheritances, or wealth-creating tools such as homeownership, according to the Urban Institute. Once black students graduate, the extra debt may prevent them from activities that build wealth -- for example, buying a house or saving for retirement.

“Student loan debt can have ripple effects. It can delay when people buy their first home and when they begin to start saving seriously for their retirement,” said Signe-Mary McKernan, a senior fellow at the Urban Institute. “This disadvantage means that African-Americans are getting a late start in wealth accumulation.”

The Urban Institute analysis relies on data from the Federal Reserve Board of Governors' survey of consumer finances. One critique of the survey is that it underestimates total outstanding student loan debt.

One important caveat: The Urban Institute analysis relies on data from the Federal Reserve's survey of consumer finances. One critique of the survey is that it underestimates total outstanding student-loan debt. A recent New York Fed study found that lenders report higher levels of debt.

All students who weigh whether to borrow for college face a catch-22. Research shows it’s much harder to get a decent-paying job without a college degree, yet saddling oneself with loans can be daunting. Among African-American students, the choice can be particularly acute.

For one thing, African-American students are less likely to graduate from college, according to the Urban Institute, meaning they won't have a degree to help them land the kinds of jobs that will pay off loan debt. That, says the Institute, is in part because African-American students are more likely to attend for-profit colleges. Those schools often have lower graduation rates than nonprofit counterparts, and they’ve come under fire in recent years for not delivering on promises to get jobs for graduates.

And black students who do get a degree often face discrimination in finding a job. Recent black college graduates face an unemployment rate double that of their white counterparts, according to a 2014 analysis from the Center for Economic and Policy Research. A study from the National Bureau of Economic Research suggests that this may be due partly to a subconscious bias against black job applicants.

The first few years of a career are extremely important in determining how much money a person will make over their lifetime, and whether there will be enough to do things like buy a house or save for retirement. This combination of factors makes it especially difficult for black college graduates to gain wealth.